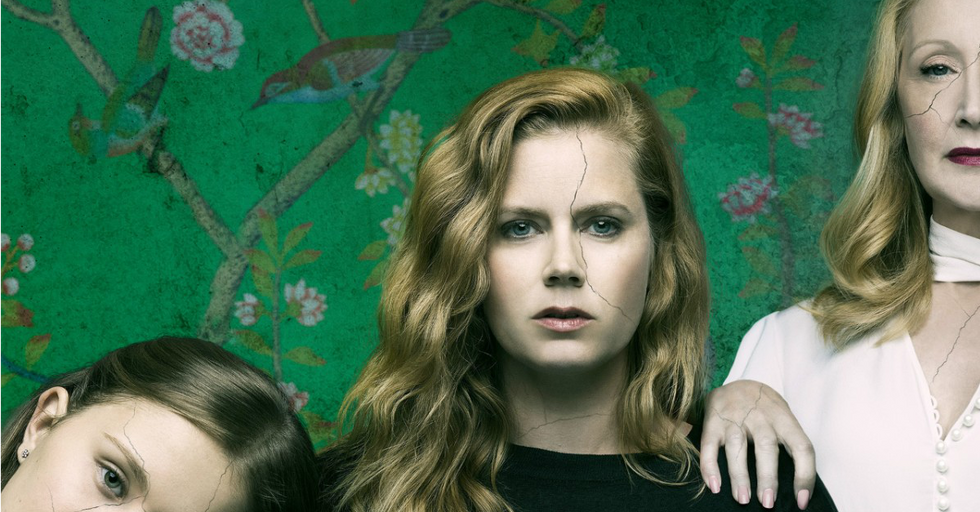 They should include a disclaimer before crime shows. “Warning: you’re about to fall down a (murder-filled) rabbit hole!” If you’ve hopped on the Sharp Objects train, well, welcome to the party. And if not, what are you waiting for?

The Gillian Flynn novel-turned-HBO series follows a crime reporter who returns to her hometown to investigate the murders of two young girls, and soon finds herself confronting her own demons.

If you need a fix until the next episode comes out (we sure do!), keep reading to discover 20 crime shows and podcasts that are equally as addicting.

Like Sharp Objects, Broadchurch follows an investigation into the murder of a child. David Tennant and Olivia Colman play a pair of detectives looking into the mysterious death, and the seaside British town makes for a scenic backdrop to a very dark story.

This German series became a word-of-mouth success on Netflix, and it’s creepy enough to have you on the edge of your seat. It takes place in the fictional town of Winden as children begin disappearing without a trace.

The podcast that kicked off a true crime obsession, the first season of Serial is a must-listen for anyone who’s fascinated with investigative work. Join Sarah Koenig and her team as they try to untangle the messy story of the murder of Hae Min Lee.

The first season of The Killing tracks the investigation into the murder of local teenager Rosie Larsen. Each episode covers about 24 hours, making it super bingeable.

Need something a little lighter? My Favorite Murder is a podcast that blends crime stories with comedy. Each episode examines a different murder or crime story, and the hosts throw in tangents about their personal lives and current events. On the next page, get lost in a dark show about a missing teenager.

You’ll be obsessed with (and freaked out by) this eight-episode series starring Michael C. Hall. Hall plays a pediatric surgeon and widower with two teenage daughters, one of whom goes missing. He uncovers a web of secrets as he tries to find her.

Created by Wondery and the Los Angeles Times, Dirty John is a true crime podcast about John Meehan, a shady character who managed to catfish a well-off Southern California woman, to her family’s dismay. No spoilers here, but the explosive ending will leave you with your jaw on the floor.

One of the top-rated tv series of the '90s, Twin Peaks, is totally worth the watch if you haven’t seen it yet. Tag along with Special Agent Dale Cooper as he investigates the murder of homecoming queen Laura Palmer. Along the way, there’s plenty of supernatural activity, soapy romance, and offbeat jokes.

The first season of this true crime podcast covered the case of Jacob Wetterling, an 11-year-old boy who was kidnapped and murdered in 1989. The case went unsolved for 27 years until Wetterling’s remains were found in 2016. In the Dark examines why and how the case stumped investigators.

Another HBO series, The Night Of is sure to have you glued to the couch for all eight episodes. The main character Naz finds himself on the wrong side of the law when he wakes up after a rough night of partying to find his companion has been stabbed to death. Click next to discover a highly rated podcast with more twists and turns than a water slide.

Like Sharp Objects, S-Town starts with an alleged murder in a small town, but it follows a very different path after that. A curious journalist heads down to Alabama to investigate and ends up uncovering a group of eccentric and colorful characters that send the podcast in a totally different direction than expected.

The first season of this series follows Cora, a young mother played by Jessica Biel who suddenly kills a man in public and seems to have no idea why she did so. As the season goes on, you’ll find out more about her intense backstory.

This CBC podcast focuses on unsolved cases involving Indigenous women in Canada. Finding Cleo follows the heartbreaking story of Cleopatra Semaganis, who was taken from her family through the Canadian government’s initiative to re-home Indigenous children with white families.

A British-French crime drama series, The Tunnel will take you along with a pair of detectives working to find a serial killer who left the upper half of a French politician and the lower half of a British prostitute in the Channel Tunnel, between France and the UK.

The first season of this investigative podcast looks into a cold case, the disappearance of five-year-old Adrien McNaughton during a family fishing trip. Host David Ridgen speaks with the family and tries to hone in on details that detectives missed. Next, the grittiest detective show we know.

With weathered detectives, complicated personal lives, and a small-town setting, True Detective scratches a lot of the same itches that fans of Sharp Objects are looking for.

Host Portland Helmich untangles the tale of the Boston Strangler, who murdered 13 women before being caught in 1967. She brings up a new theory—was there just one man responsible, or did he have multiple accomplices?

This British television series follows MI5 officer Eve (Sandra Oh) as she tracks down a psychopathic female assassin. You’ll be obsessed with watching as the two become obsessed with one another.

Season 1 of Crimetown has launched. Welcome to Providence, RI. Listen to the first two episodes and subscribe! https://t.co/jyfphyTH1b
— Crimetown (@Crimetown)1479740969.0

This Gimlet Media podcast examines the culture of crime in a different American city every season. The first season goes to Providence, Rhode Island, where you’ll hear about mobsters, heists, and crooked cops.

Another series focused on the inner lives of women, Big Little Lies is a soapy, thrilling look at life in Monterey—and the murder investigation at the heart of it all will keep you firmly on the couch until you’ve seen it through. Got a friend who’s just as obsessed with crime stories as you are? Be sure to share this article with them on Facebook!