She Didn't Tip Her Delivery Driver, and the Note He Left Will Flat-Out Terrify You | 22 Words 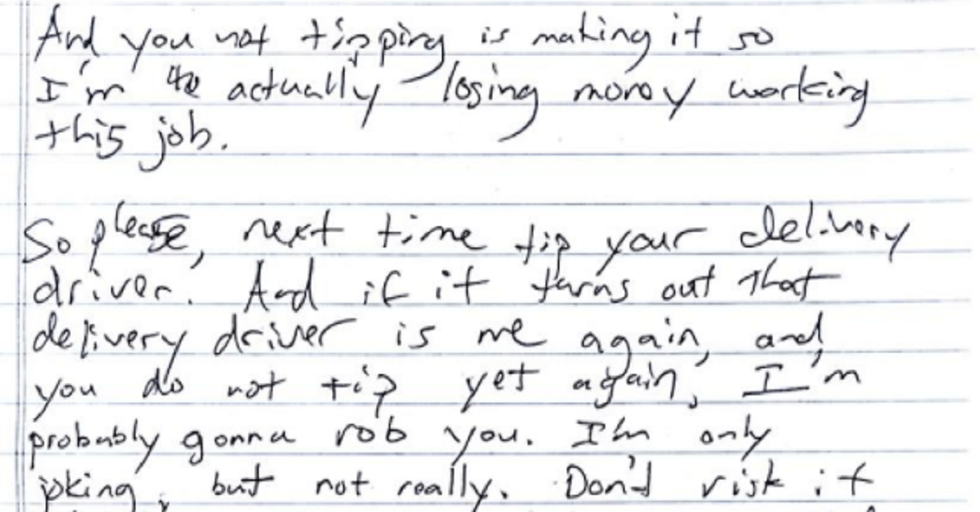 She Didn't Tip Her Delivery Driver, and the Note He Left Will Flat-Out Terrify You

After working food service, I can understand that sometimes customers can grate on your nerves a bit. But wait until you see the weird measures this guy took after feeling like he was slighted by a customer.

Lauren Ledford posted this note she found on her door left by a delivery driver.

The note is four pages long! She only posted the last two, and quite frankly I'm curious what those first two said. I mean, I understand wanting to vent, but four pages?

Aside from being extremely long, the note also appeared relatively planned out.

One commenter somewhat humorously pointed out that the delivery driver has "serial killer handwriting", and it's true. This note looks straight out of a murder mystery you'd see in a crime documentary.

The content of the note is fairly graphic, but also bizarre.

Between his sexist and anti-Semitic remarks, he remarked how high he is, so that really makes you wonder what this guy was on.

She had already contacted the proper authorities, but no action had been taken yet.

In her post, she says it was definitely a driver through Postmates, as the only pizza delivery she had received was through them, and that Postmates had not even responded to her emails.

Some said that they would never use Postmates again.

It's pretty crappy of Postmates to not respond to Lauren's emails when this guy clearly needs to lose his job.

Others around the Web have rightfully stood up for Lauren, hoping that the driver will face consequences.

Postmates responded to others who had contacted them on Facebook, so perhaps action will be taken soon.

Regardless, it's completely terrifying and has everyone freaked out.

This is exactly why I'm glad people just deliver to the gate at my apartments. I don't want murderous Postmates drivers leaving notes on my door!

I would fire this guy before your PR nightmare gets any bigger, just like Lauren's actual real-life nightmare did because of your driver.