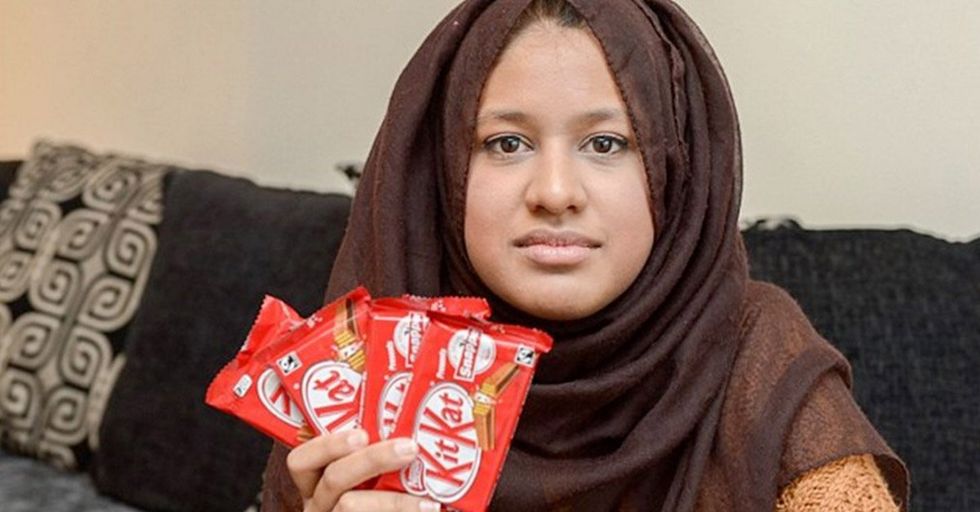 She Found a Defective Kit Kat. Now Look What She’s Demanding From Nestle

What matters isn't when we encounter them, but how we react to them. Do we roll with the punches or create a fuss?

How we deal with these things is a big part of who we are as people.

However, sometimes instances can ellicit these extreme reactions from people who otherwise calm.

We all have our hot buttons that can be pushed to drive us crazy.

When the issue is over something you're passionate about, you can get very vocal and even garner support.

It doesn't matter if the cause is big or small. There are all sorts of mantras on the matter, but people chip in when it's something they feel strongly about. Like...

See how one mix-up with a candy bar sent one girl to crazy lengths to right this perceived injustice. You might laugh, but it seems like she takes her efforts very seriously!

Saima Ahmad takes her chocolate seriously. The 20-year-old London-based law student bit into her Kit Kat recently, she noticed its trademark crunch was missing, according to British website Metro. So she decided to write the company a note...

No crunch? That would ruin my...minute? Two minutes?

Such a scenario would be disappointing, sure, but probably wouldn't get most people to draft a letter. Saima is not "most people," however.

In a sternly-worded letter, Ahmad let Nestle know what was on her mind. The note read: "The truth of the matter is; manufacturers owe a duty of care to consumers.

As a result I feel as though I have been misled to part with my money and purchase a product that is clearly different from what has been marketed by Nestle."

But there's more! She offered them a truce under one condition.

She extended the olive branch, but there were conditions associated with it.

Would Big Chocolate bow down to the demands of one measly customer?

Her gripes don't stop there.

"The loss I have suffered is of monetary and emotional significance.

I would like a full refund of the defective pack of Kit Kat I purchased. I have also lost my faith in Nestle.

Clearly, if I wanted to purchase a confectionery item that is purely chocolate, I would have purchased a bar of Galaxy.

I would therefore like to request a life-long supply of Kit Kat so that I can act as a means of quality control – it appears you need me more than I need you."

And Ahmad wasn't the only one who had to endure this kind of emotional damage. Many Twitter users backed up her story with photos like the one above.

That's a clever move, isn't it? She took control of the situation by appealing to them practically. It's sort of hard to say no to something like that.

A Nestle spokeswoman told NBC News that occasionally the factory does flub up. "[A] Kit Kat finger without wafer does leave our factory from time to time but is extremely rare and we have checks in place to try to prevent it happening as far as possible."

Tragically, at time of writing, we don't know if Nestle has agreed to meet Ahmad's demands. We have a feeling she'll survive this ordeal either way, though.

If she wins this debate and gets her way, we might have to make a new friend.

I mean, a lifetime supply of chocolate is a pretty powerful asset in endearing yourself to people.

So let's all scoot to the edge of our seats and see how she does.

We'll either mooch some food off her or start our own claim against a chocolate company to get our own stash of sweets.