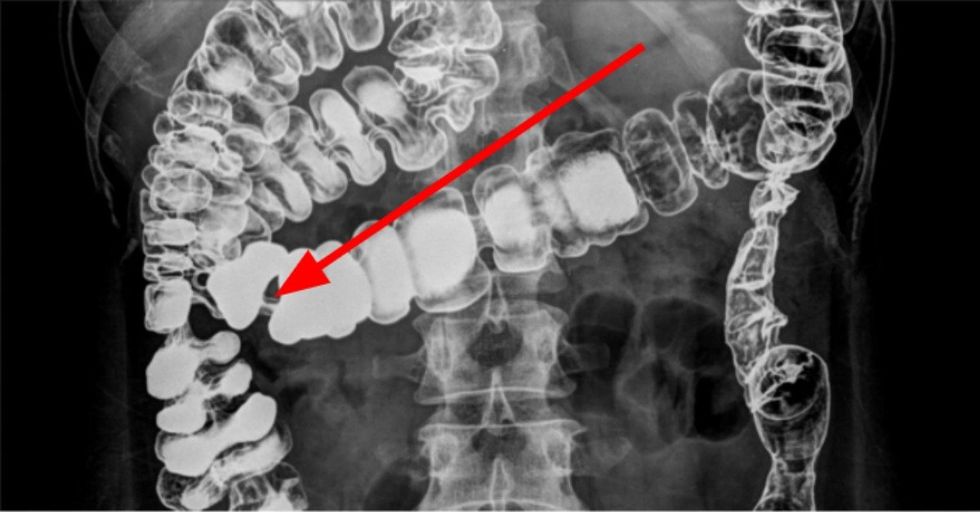 She Had WHAT Stuck In Her Intestines For Ten Years?!

Middle school was so awkward. Your face was a minefield of pimples, your body was sprouting hair, your mouth was full of metal.

Having braces is a teenage rite of passage. You're practically not a real teen unless you struggle to eat corn on the cob and chew gum for months. You can't graduate to adulthood unless you know the feeling of tiny rubber bands snapping against the inside of your cheek.

Luckily though, for most of us, the braces come off one day, and that awkward time in our life is quickly blocked from our memory, never to return again.

See how these awkward memories came back to haunt an emergency room patient YEARS later.

It's safe to say that emergency room workers have seen some crazy stuff.

It sort of comes with the job. With so many medical emergencies, the stories behind them are quite literally, beyond belief. But they're not here to judge. They're doing a public good, and that involves putting the weirdness aside and helping people feel better.

But still, there's the issue of human curiosity, and that's not something that can be put aside easily.

So while quotes like this remain very true, there's still an element of "WTF?" that can't be avoided when something strange comes through those doors. After all, nurses aren't superhuman. They can still get floored and amazed, despite having a job to do.

It certainly can't be (and isn't!) a run-of-the-mill issue. In fact, one visit led to an incident that has been about a decade in the making.

An Australian woman recently went to the emergency room complaining of abdominal pain and cramping.

At first, doctors believed the pain originated in her gallbladder, and once the pain subsided, she was released from the hospital, according to CNN. Two days later, the pain was back, and she returned to the emergency room.

When you realize what the cause of the pain was, you'll have flashes of both nostalgia AND terror.

It's amazing how far dental equipment can travel, especially when it's been a decade. (You're probably a little confused by what one has to do with the other, but it will become PAINFULLY clear soon enough.)

When doctors did a CT scan, they realized an object had punctured the woman's small intestine in several places.

They believed it was a fish bone at first, but the woman didn't remember swallowing anything. It was determined that the woman needed emergency surgery.

During surgery, doctors discovered the object causing the pain was a 7-centimeter long piece of wire.

It was likely from the braces that she'd had 10 years before. This woman didn't realize she'd swallowed a wire from her braces, and then it proceeded lounge around in her intestines for a decade until it wasn't getting enough attention and punctured her small intestine. Ouch. Dr. Talia Shepherd, who treated the patient, said people with braces shouldn't be worried about this happening to them. Yeah, fat chance.

Of course, nasty old braces aren't the only strange object that's wound up in people's bodies.

Someone swallowed a Fit Bit. You think it still tracks your steps from inside your stomach?

This case is possibly even stranger.

A woman complained of swelling in her abdomen, vomiting, and extreme weight loss. Doctors saw a large mass blocking nearly her entire stomach and it turned out to be a 10-pound hairball!!!! She had a bad habit of eating her hair (called trichophagia), and it totally came back to bite her.

Then there was that time an Australian woman accidentally inhaled her earring.

PSA to all asthma sufferers: Please keep the cap on your inhaler. If not, you risk what happened to this woman, whose earring was hanging out in her purse along with her inhaler before it got caught in there. She picked up the earring-filled inhaler but didn't notice something was off until she inhaled sharply, sending the earring up into her bronchus, where it got super stuck. We know what you're thinking: AHHHHHHHHH! Us too.

Fortunately, she lived through the unlikely choking incident, but her survival was against all odds.

Thought it was stuck in her throat, it didn't block her airway completely, meaning she was able to still breathe, albeit in panicked and painful fashion. It's hard to prepare for such weird incidents, but it's still important to learn about them and keep them in mind.

Contact lenses are very small and transparent, so I can understand how someone might lose one in their eye.

If you're reaching at your eye wondering how that's even possible, you're certainly not alone.

It turns out that you can make quite a bit of room in your ocular cavity...not that you'd want to. Did she think they just evaporated? Probably. Otherwise, she must just REALLY hate her body for reasons we might never know.

And last, but certainly not least, is the tale of the brain worm.

Doctors believed Rosemary Alvarez had a brain tumor, but when they went to operate, they discovered it was a parasitic tapeworm worm eating her brain (not the one pictured above, but it probably looked similarly gross). Cool cool cool, no big deal. She made a full recovery, but it's going to take us some time to get over this.

Well, these stories will certainly wake you up in the morning.

It's a crazy world out there — that's the bad news. The good news is that there is a whole industry dedicated to saving us from our own shortcomings and bad fortune. So the next time you see a hospital worker, you might want to thank them... ....in advance.