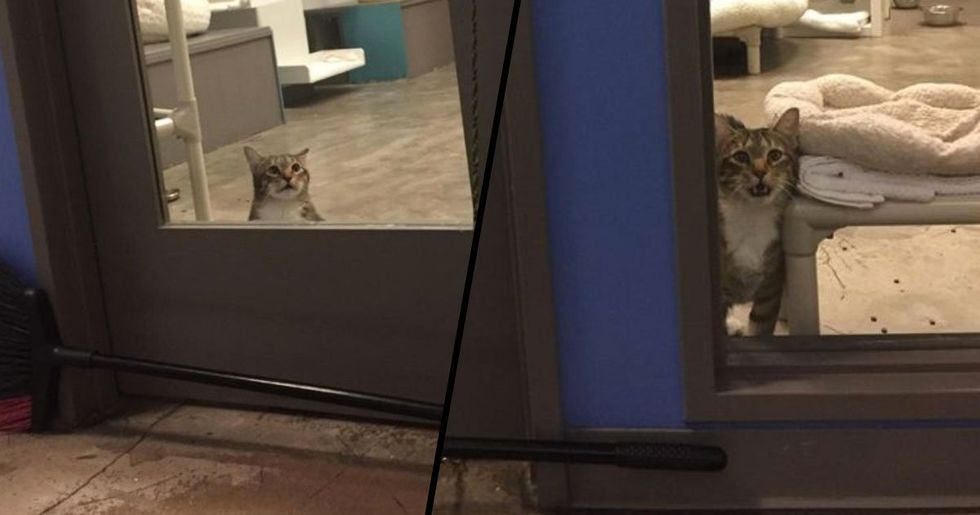 Visiting the local animal shelter is always an exciting time.

Picking out your new little companion is a wonderful experience, and these animal shelters are the home to many unfortunate pets who are just looking for a new loving home.

But not all of these pets come equipped with manners, however...

One cat in a shelter in Houston, Texas, has been put away in a kitty solitary confinement after he would repeatedly let the other cats out of their enclosures - including himself.

But some animals get very lucky...

The ASPCA also found that 3.2 million shelter animals successfully find new homes when they are put up for adoption.

In many shelters, a lot of animals are kept together for long periods of time.

Meaning there will always be a few minor problems between certain animals.

A pet shelter in Houston, Texas, has experienced a rather unusual problem with one of their residents...

The Friends For Life Animal Rescue and Adoption Organization, based in Houston, is an organization that strives towards adopting homeless animals.

They don't agree with euthanasia...

And they work hard to ensure no animal has to be put to sleep just because they're homeless.

This particular shelter is the home to many unwanted felines...

A lot of cats reside at Friends For Life, and due to the organization's hard work, the majority of them quickly find new and loving homes.

So who exactly is the shelter's local trouble-maker?

Meet Quilty, a 6-year-old tabby cat who has been a resident at Friends For Life for quite some time now.

Quilty is described as a shy and placid boy...

"What is the coolest cat name you’ve ever heard? I think my name, Quilty is the winner!" his bio on the Friends For Life website reads. "I love my name almost as much as I love a CLEAN litter box and sunning on the balcony. As much as I like getting pets, I really don’t like to get belly rubs."

The perfect picture has been painted of Quilty...

"I'm a smart, energetic, laid back fella, bit I can be a bit shy. If you have a friendly dog at home that is OK with me, but I'm not sure about young children," his bio goes on to read.

So what exactly is the problem?

Quilty has a nasty little habit of opening doors.

Quilty would also help out his fellow feline friends...

By opening the doors to their enclosures and letting them roam free.

Quilty's antics began to get out of hand...

The shelter created their very own kitty solitary confinement to stop Quilty from releasing his neighbors and to teach him some "real manners".

Friends For Life have been documenting Quilty's sentence on social media...

"Quilty's review with the parole board was denied, so he released himself of his own recognizance," the shelter posted on its Facebook page.

Quilty is a very stubborn feline...

"He felt that confinement had nothing more to offer him. He has been returned to solitary. Quilty will not be contained. And he has no shame," they went on to say.
"His roommates missed him while he was banished to the lobby. They enjoyed their nighttime escapades around the shelter."

According to Friends For Life, Quilty would pull the same stunt at his old home...

"If someone out there is looking for a clever cat that gets along with dogs but does not get along with closed doors, we have someone they really need to come and meet," they continued.

And a fan page in the stubborn feline's name has even been created!

The account, which goes by the name @free_quilty, was created to embrace the feline's quirky behavior, and it is also a message to potential cat owners that Quilty isn't going to be changing any time soon.

Quilty now even has his own fan base...

And more and more people are falling in love with the grumpy feline, leaving comments such as, "I love him so much," and "Somebody PLEASE let that boy out, he needs to be free!"

A lot of people have put their names down to adopt Quilty...

And he has been to a lot of sleepovers with potential families, so fingers crossed that this mischievous moggy will find a new home very soon!