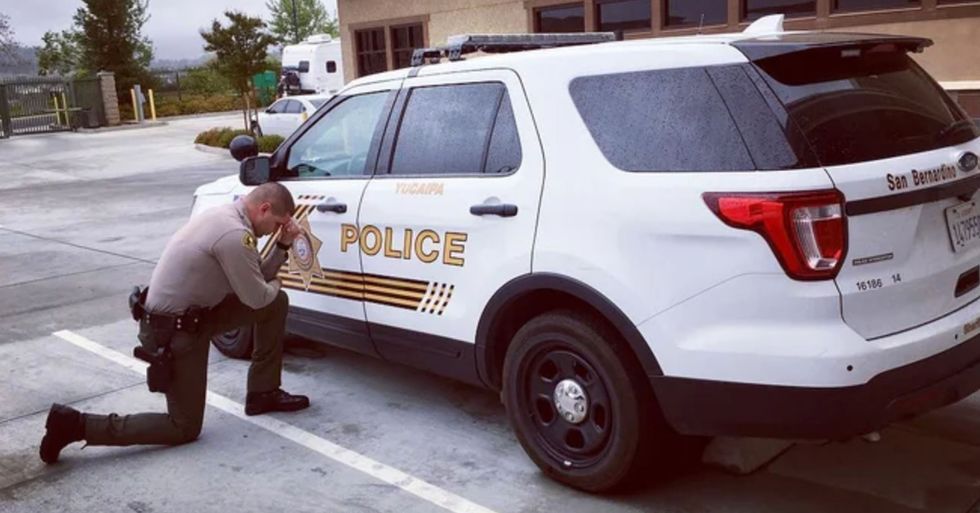 We are living in dark and uncertain times.

The rapid spread of COVID-19 has caused mass panic and people have been turning to God more than ever.

The Deputy Wedge of Yucaipa Police Department was recently spotted praying by his truck before his shift and unbelievably, it has caused a lot of backlash.

This is the worst pandemic our world has faced in decades.

The rapid spread of COVID-19 has caused global panic, and millions have been left living in lockdown.

An alarming number of people have died in the last few months...

44,228, to be precise. A further 886,108 people are currently infected with the virus globally, and the United States currently holds the highest number.

And it's safe to say that people are terrified.

President Trump has declared a state of emergency...

And he has warned residents that the upcoming weeks will be extremely tough. "I want every American to be prepared for the hard days that lie ahead," he said at his latest briefing from the White House, "This is going to be one of the roughest two or three weeks we’ve ever had in our country... We’re going to lose thousands of people."

People have been coping in different ways...

And many have been turning to God during these difficult times.

People's faith is now stronger than ever...

I have some amazing news. I’m leaving the Ulster Hospital. I want to thank everyone for their prayers. I want to th… https://t.co/fjWYdqcCQ0
— Mark McClurg (@Mark McClurg)1585501447.0

And it has been getting many through these unimaginable times.

And even the power of prayer can make a huge difference to someone's day...

Lord Please have mercy on the nations of the world. Let this corona virus come to an end in the name of Jesus. I pr… https://t.co/4GOTqXHytX
— P.Daniel Olawande (@P.Daniel Olawande)1585576465.0

Even if they aren't strongly religious.

Some people are putting themselves in more danger than others...

People who work for local authorities and the emergency services are putting themselves on the line every single day to assist their local communities and help those in need.

Police officers have been working around the clock worldwide...

And many completely underestimate the risks that these people are putting themselves in every day.

The Yucaipa Police Department in California is, of course, stretched to its limits.

This morning we caught #YucaipaPD Deputy Wedge in the parking lot of the station. He was kneeling in front of his P… https://t.co/4eQJcfvcF3
— Yucaipa Police (@Yucaipa Police)1525205276.0

But recently, the department came across a photograph taken in 2018 of Deputy Wedge kneeling down on one knee beside his PD vehicle.

It is truly moving to see...

He was praying before his shift started, asking God to keep his partner and community safe. A co-worker happened to witness this moment and moved by the deputy’s faith and dedication to his work, they decided to snap a picture and post it on Twitter.

People have been left touched by the picture...

@YucaipaPD @sbcountysheriff May Deputy Wedge..and SO many others who serve our communities, our country, and the wo… https://t.co/5Y34QIF8Uq
— Kerry couch (@Kerry couch)1525215187.0

And are especially touched after seeing it resurface during these difficult times.

People (somehow) had a problem with this reposting.

Some users online began to express their shock at the department for using a religion-based photograph.

"I support his right to pray if he wishes, but I also feel this post is inappropriate for a government agency to be making," one Facebook user wrote.

Some people decided to get political...

And many vented their anger and frustration - none of which had anything to do with the officer personally.

Many also believe that Church and State should be treated separately.

"What about separation of Church and State? I don't have a problem with this deputy praying before his shift, but I think it's inappropriate for you to post this," another Facebook user wrote.

Well, we personally think this is a beautiful message to send...

And there is nothing at all inappropriate with spreading this message of positivity. Keep scrolling to learn about the police officer who spent his lunch break sharing pizza with a homeless woman...