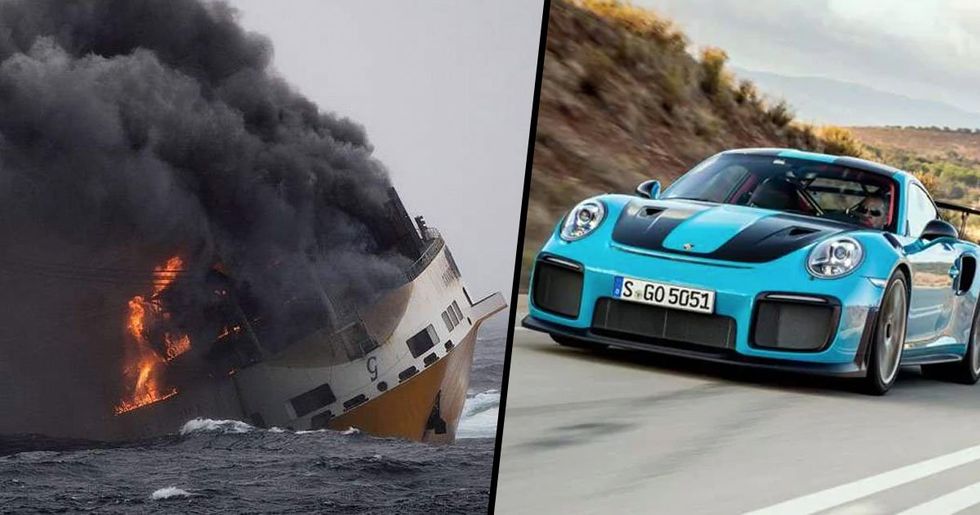 It's the story of The Titanic all over again - only this time, its main victim was our ocean...

A cargo ship carrying thousands of cars sank near the coast of France over a week ago. Some of Porche's most popular models were among those that literally hit rock bottom. Audi was affected, too. The damage was worth billions of dollars!

Luckily, the heroes of the story, the Royal Navy, happened to be nearby at the time of the fire, and they came to the crew's rescue. Working for hours in the middle of the night, they managed to save everyone. However, most of them had experienced smoke poisoning, while others required medical attention.

The fuel that spilled from the sinking cargo contaminated the ocean and atmosphere with hydrochloric and sulphuric acid. Environmental groups are planning to file a criminal complaint about the damage it caused.

Meanwhile, some found the story quite funny.

The Italian ship was carrying around two-thousand cars.

Around thirty-six of them were Porches, Daily Mail reports. And not one survived the fire.

The cargo ship sank near the Atlantic coast of France.

Twenty-seven crew members were on board at the time of the accident. Luckily though, the British military managed to rescue every single one of them.

The French quickly got to work, trying to contain it before it started to spread.

Porche has confirmed that 4 of the thirty-six cars that were on board that day were of the popular 911 GT2 RS model.

Since February, these cars are no longer being produced.

But Porche decided that the best option in this unfortunate situation was to make another 4 to make up for the lost ones.

The company wrote apology letters to the customers waiting for the cars, letting them know that they were being reproduced for them. Talk about customer service!

"We are sorry to inform you that, due to a fire, a Grimaldi group ship, that was transporting your vehicle, sank on March 12, 2019," the letters said.

"And for that reason, your GT2 RS cannot be delivered." Sounds like a "my dog ate my homework" kind of situation...

The letter continued, "As you may know, Porsche ended the 911 GT2 RS production [in] February 2019 and under normal circumstances, it wouldn’t be possible to give you another car."

"But, due to the nature of the situation, and considering that you’re a loyal and highly valuable customer [How many Porches can you afford in a single lifetime?!] for our brand, Porsche has decided to resume the GT2 RS production in Germany, and your vehicle will be produced in April, with delivery scheduled for June."

"We recommend that you contact your local Porsche Center for further information."

Among them were seven-hundred and eighteen Caymans, Boxters, and Cayennes.

Thirty-six cars were lost in total - that must be around eleven million dollars of damage for Porche! We bet its executives had headaches for days!

Audi also had a number of cars on board of the Grande America.

As the many vehicles sank, a Royal Navy vessel came to rescue the crew from one-hundred and fifty miles away.

The crew had tried to put out the flames, but to no avail.

Eventually, they were forced to abandon it and board a lifeboat - all in the middle of the night. Poor things.

But the lifeboat's engine had been damaged in the fire.

The damage meant that the crew couldn't get away from the flames and were left "bobbing around like a cork in a bathtub."

Once HMS Argyll received their mayday message, they moved towards the sinking ship's location across difficult sea conditions.

Those men were real heroes that night. I wonder if Porche gave each of them a car... Probably not.

Lieutenant Commander Dave Tetchner of HMS Argyll said, "It was pretty awful for [the cargo ship's crew] – they’d had to fight a fire in dreadful seas."

"Every one of them suffered smoke inhalation. Then they faced the prospect of abandoning ship and then their lifeboat failed. It was pretty awful all [round] and they were shocked."

"You see container ships like this every day when you’re sailing around the world."

"What you do not see is one in flames – it was a dreadful sight," he added.

The twenty-seven men were taken to the port of Brest.

None of them incurred any life-threatening injuries. But a few had to be taken to the hospital.

As for the Royal Navy men, they couldn't wait to get back home to Plymouth.

Turns out, that night they were coming back from a 9-month long trip, working with allies in the Asia-Pacific region.

Meanwhile, Grande America was on their way from Hamburg, Germany, to Casablanca, Marocco.

"I commend her crew," he added.

"This rescue demonstrates that even on the final leg of a challenging 9-month deployment to the Far East, the Royal Navy's sailors remain vigilant and professional at all times."

But although everyone survived the accident, the extent of damage done to the environment is unbelievable.

Two-thousand, two hundred tons of fuel made its way into the ocean. BBC says that Grande America was carrying three-hundred and sixty-five containers. Forty-five of them contained "hazardous materials."

This was 10 tons of hydrochloric acid and seventy tons of sulphuric acid!

Head of the regional maritime authority, Vice Adm Jean-Louis Lozier, said that because most of those materials had already burned, the damage was expected to be "very localized" and "would not have serious consequences for the environment."

But Christian Buchet, the director of the Centre of Ocean Studies, Catholic Institute of Paris, disagrees:

"Everything that burned - the containers, the drums of hydrochloric and sulphuric acid - that doesn't disappear. It goes up into the atmosphere," he said.

The cause of the fire is still unknown.

Experts believe that it must have been a fire that first started on the car deck, then moved to one of the containers.

An investigation has been opened.

But Robin des Bois, a French environmental campaign group, is planning to "file a criminal complaint [about] the spill's environmental damage."

"It's a car crash at the bottom of the sea, representing hundreds of tonnes of toxic materials in an area very rich in fish, plankton and marine animals," said the group's spokesperson.

BBC says the spill that Grande America caused was the first one to affect France since 2011.

While they were happy that no one was seriously injured, some found humor in the story.

Jason wrote, "The British naval officers were rushing to the scene in the hope of picking up a few cars and claim them as theirs under maritime salvaging rules."

Daveyk15: "Luckily, no British made cars were on the boat, oh wait we don't make any."

Mike T. "Now I have video proof of what happened to my wife's birthday gift. Shesshh!!! Can't win."

Accidents like this one really make you think about how silly it is to get attached to expensive material things.

They're too easy to lose. And usually, there’s nothing you can do but watch them sink.