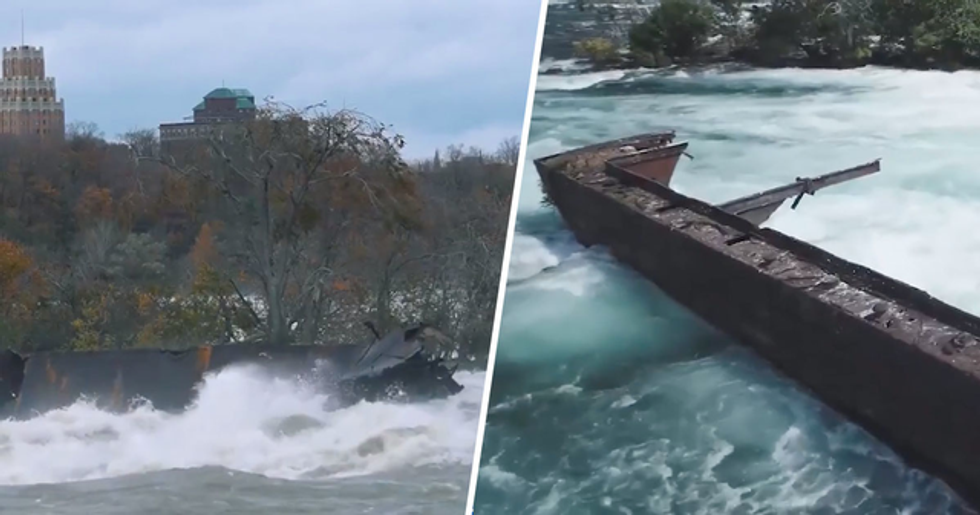 For over one hundred years, a ship called the Iron Scow has rested on a rocky perch on top of Niagara Falls. After a dramatic rescue of crew members back in 1918, the ship came to a halt on a piece of rock where it remained, just above the Horsehoe Fall. Until now.

After heavy rains and dramatic storms over the past week, officials have confirmed the ship is making moves. The shift is small - but it's the first movement it's seen in one hundred and one years. Will the boat finally plunge over the edge of the falls? Only time will tell.

Niagara Falls is one of the true wonders of the modern world.

Located on the border between the USA and Canada, these magnificent waterfalls are as beautiful as they are slightly terrifying.

And, indeed, they are a site of danger.

Over the years, they've claimed many boats - but one, in particular, has gained fame. Likely because over one hundred years later it can still be seen.

Known as the Iron Scow, it represents a near-tragedy.

Plus, a truly heroic rescue. In 1918, Gustave F Lofberg and Frank Harris ended up in real bother when their boat floated scarily close to the edge of the massive Horseshoe falls.

The men were rescued, but the boat remained in place.

It ended up on a rocky bed, and that's where it stayed for over a hundred years. In fact, last year, Niagara Falls celebrated the anniversary of the Iron Scow accident.

And it seemed as though that's where it would stay.

The boat seemed pretty stable, and for many was a memorable landmark of the Falls.

Or so we thought.

Because over the past month, Niagara Falls has seen some of the worst weather in years. While it's no stranger to perilously cold temperatures, the heavy rainfall has caused havoc.

And last week, on the spookiest night of the year ...

The record-breaking amount of rainfall had a pretty frightening effect. Twas a dark and stormy night, indeed.

The heavy storms had a surprising impact.

The huge amount of rainfall meant the river was far deeper, and thus the currents of the area became stronger than ever.

And with these currents came a bigger issue.

For the first time in a century, it seemed the Iron Scow was on the move. Senior manager of heritage Jim Hill said, "It has been in place for over 101 years but it appears that last night, on Halloween, that the scow shifted."

“We think it turned and twisted in the very heavy current and flow of the river."

This means the ship is making moves towards the very edge of the falls - and could even end up going over.

As Jim Hill put it, the Scow "appears to have sort of flipped on its side and spun around."

But even a small movement has big implications.

The Scow hasn't moved in the hundred years since it was marooned there - so the fact it's made any change is pretty big news.

The move is around one hundred and fifty feet.

But it now means the Scow is closer to the edge than ever before - which is pretty scary stuff!

"Will it stay in place?"

“It looks secure at the moment; however, if there’s severe weather that comes along, it may shift it some more." Want to see more of Niagara Falls? Scroll on for the breathtaking images of the falls when they froze over and turned into a total winter wonderland.