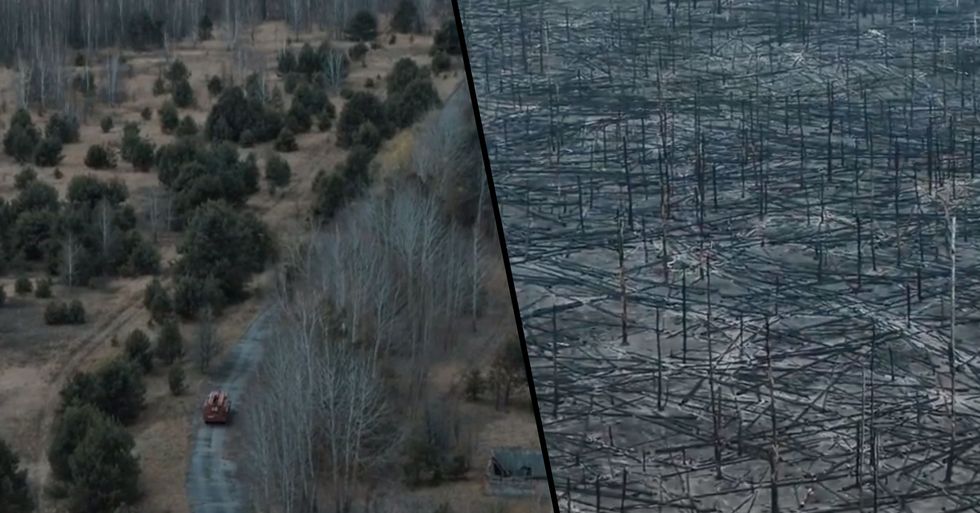 The Chernobyl disaster made history across the world and remains a chilling topic to this day. But, over the last couple of weeks, it has found its way into headlines once again after forest fires began burning near the exclusion zone.

Keep scrolling to witness the shocking drone footage that has been captured of Chernobyl this week...

The area, which has been overgrown by nature and wildlife since it’s abandonment, is no stranger to large forest fires. But, this time, it seems to be getting truly out of hand.

And if you thought matters couldn't possibly get any worse...

Just a week after the radiation spike was discovered, the fires are reported to be getting dangerously close to the nuclear reactor.

If they get too close to the reactor, the ramifications could be huge.

If the blazes reach the reactor, there are growing concerns that there could be radiation contamination.

These are tense times for people living in the surrounding areas...

And now, drone footage has emerged showing just how severe things are at Chernobyl.

And along with his friends, he took his drone to the exclusion zone of Chernobyl where the fires have been raging for the last 2 weeks.

The footage he captured was breathtaking.

Huge areas of land can be seen completely devastated by the fires...

And blackened trees are standing lifelessly together, which paints a dark picture of what has taken place here over the decades.

At one point, a lone fire engine can be seen making its way through the deserted roads...

And even though many of the fires have now been extinguished, the damage seems to be irreversible.

Kapralov said he wanted to fully capture the atmosphere in the area following the fires - and it's safe to say he has succeeded in doing this.

He went on to explain that the surrounding areas have been slowly healing since the Chernobyl disaster thirty years ago, but the fires have brought this to a complete standstill.

It is truly devastating to see...

Watch the harrowing footage for yourselves here. Keep scrolling to read about what scene the Chernobyl [TV series] creator cut out because it was just "too horrifying"...