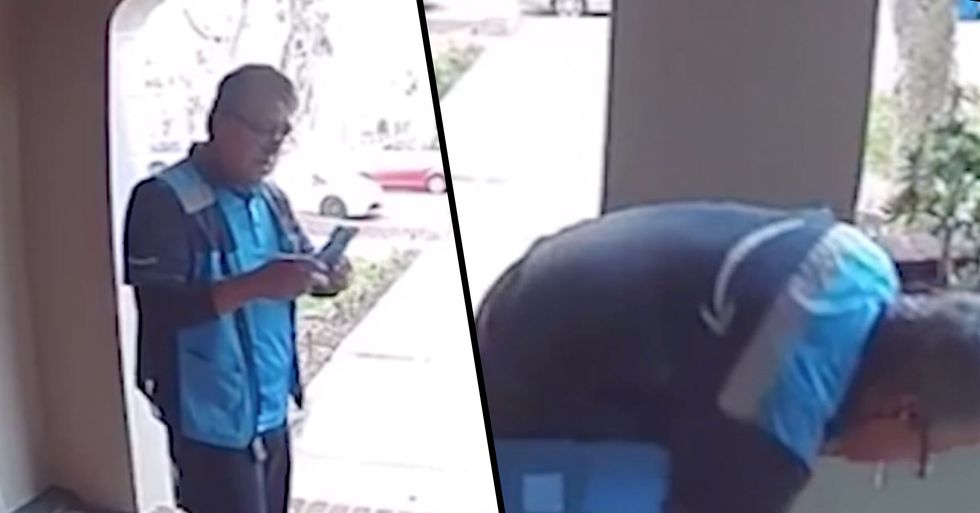 An Amazon delivery worker has repulsed the world, after footage of him spitting on a customer's parcel went viral.

Keep scrolling for the full story, and to watch the horrifying video for yourself...

We are living in strange and uncertain times.

With the deadly COVID-19 sweeping the planet, millions have descended into mass hysteria.

But some people have no consideration when it comes to hygiene.

Meaning that people are now afraid to shop in their own supermarkets.

Gerrity's Supermarket branch in Pennsylvania shamed one of their shoppers on Wednesday.

It is simply terrifying.

And more people than ever before are avoiding shopping in their local supermarkets as a result of the incident.

People are opting to shop online during the pandemic...

As it is a safer, less contagious way to stock up on supplies.

Today, horrifying footage of an Amazon delivery worker spitting on a customer's parcel has emerged, and people are repulsed.

Just when you thought online shopping was the safest option - This happens.

The worker was caught committing the disgusting act in a doorbell camera...

In the footage, which was obtained by TMZ, the delivery man can be seen placing the box by the doorstep in L.A.'s Hancock Park neighborhood and then spitting into his own hand.

He then gathers his spit and wipes it on the box...

Before calmly scanning the code and continuing with his job.

#AMAZON DELIVERY GUY DELIBERATELY #SPITS ON #PACKAGE! How y'all reacting if you caught him doing this to your packa… https://t.co/O6uwHJznwq
— Brandon Costanza (@Brandon Costanza)1585323767.0

Though be warned, you may not want to shop with Amazon ever again. Luckily, the homeowners were notified of the incident by a neighbor who witnessed the full thing. They have now contacted an Amazon rep to take the matter further. For more on Amazon, keep scrolling to hear how the CEO, Jeff Bezos, has sparked outrage regarding his stance on the COVID-19 crisis...