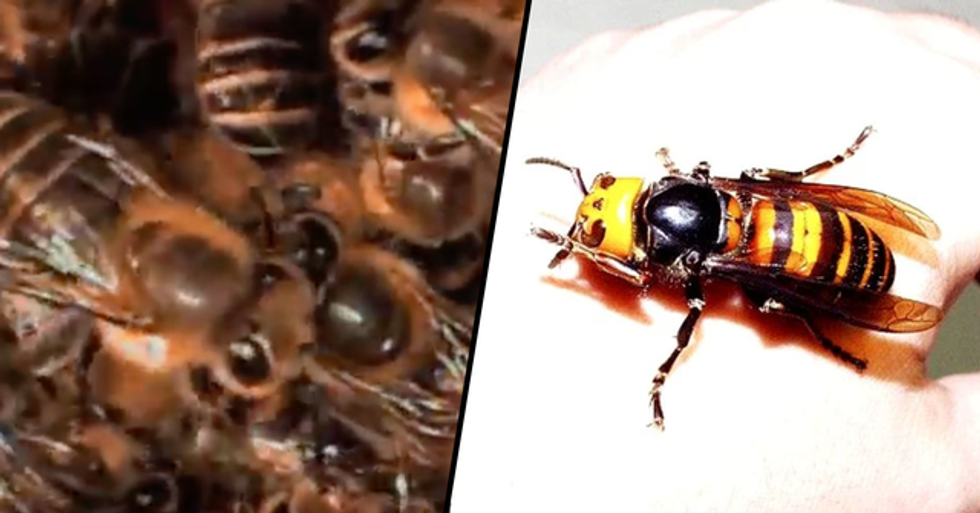 Horrifying footage has gone viral today that shows a hive of Japanese bees working together to "cook a murder hornet alive."

Though I can imagine these murderous insects were asking for it...

Keep scrolling for the full story, and to watch the shocking video for yourself.

The world comes under siege by a plague of deadly "murder hornets."

Okay, a "plague" might be a little bit of an exaggeration...

But these deadly hornets, also known as the Asian giant hornets, have been steadily spreading across the globe, and are now making a beeline for the US (pun fully intended).

Just before the pandemic, the first of these perilous hornets were spotted in Washington state.

They first appeared in the state in December last year, but generally don't become active until the spring, researchers from Washington State University said in a post published in early April.

And, now that spring has arrived...

Okay but, THERE ARE MURDER HORNETS IN WASHINGTON NOW. they can actually kill you. Wtf is happening
— desirey (@desirey)1588752439.0

People are starting to become steadily more anxious about the influx of these deadly hornets.

They can be incredibly dangerous.

The insects, which can grow to be larger than 2 inches in length, have been proven to be deadly to humans.

Multiple stings by one of these hornets can result in death.

In Japan, the insects typically kill between thirty and fifty people per year. And, during one particularly bad hornet season in the Shaanxi province in China in 2013, they killed forty-two people.

A murder hornet was even filmed single-handedly killing a mouse.

These “Murder Hornets” have made their way to America for the first time and what you’re seeing here is one hornet… https://t.co/QdPRD6bPqK
— Modern_Rock (@Modern_Rock)1588631060.0

Yes. An insect, fully killing and devouring a mouse. Understandably, the footage of this horrifying attack was quick to go viral, only spurring people's fear further.

Obviously, experts have advised people to be extremely cautious if they are to encounter one of the notorious insects.

"Don't try to take them out yourself if you see them," urged entomologist Chris Looney from the WSDA. "If you get into them, run away, then call us! It is really important for us to know of every sighting if we're going to have any hope of eradication."

But things may not be as bad as they seem...

Because their interest in wiping out the human race is apparently very low. Their main target, according to the Washington State Department of Agriculture, is the hives of honeybees, which they attack and often will destroy, largely by decapitating the bees in the hive.

It is a truly brutal process.

"The Asian giant hornet attacks and destroys honeybee hives. A few hornets can destroy a hive in a matter of hours. The hornets enter a 'slaughter phase' where they kill bees by decapitating them," the department explained.

The hornets then take over the hives of the slaughtered bees.

"They then defend the hive as their own, taking the brood to feed their own young. They also attack other insects but are not known to destroy entire populations of those insects."

And, with their numbers already dwindling across the globe, the added threat of murder hornets really isn't what they need.

But it seems that some bees have started fighting back.

Footage from Japan has emerged this week which shows their bees fighting valiantly, yet rather violently, back against the notorious murder hornets.

Researchers have been observing the behavior of Japanese honeybees...

And have found that, when attacked by a murder hornet, they fought back in an impressive, yet brutal manner.

A National Geographic video has recently shown their process in action.

A solitary murder hornet can be seen approaching a honeybee hive as a means of scouting out the hive and marking it with a pheromone that will allow fellow hornets to find it.

But things don't go quite to plan.

The unsuspecting hornet is suddenly swarmed by the bees, who were evidently ready for its attack.

The hornet is engulfed in a ball of bees...

And the thermal photography reveals that the honeybees begin to rapidly raise the temperature within the bee ball.

The hornet is then slowly roasted alive.

The bees continue to swarm the hornet until it is eventually killed by the heat.

So they may have to come up with their own defense mechanism against the murder hornets... Because, so far, their fate isn't looking great.

You can watch the full video from the brutal attack here...

Our honeybees really need to up their game. For more on the importance of our bees, keep scrolling to read about the pretty important title they were awarded last year...