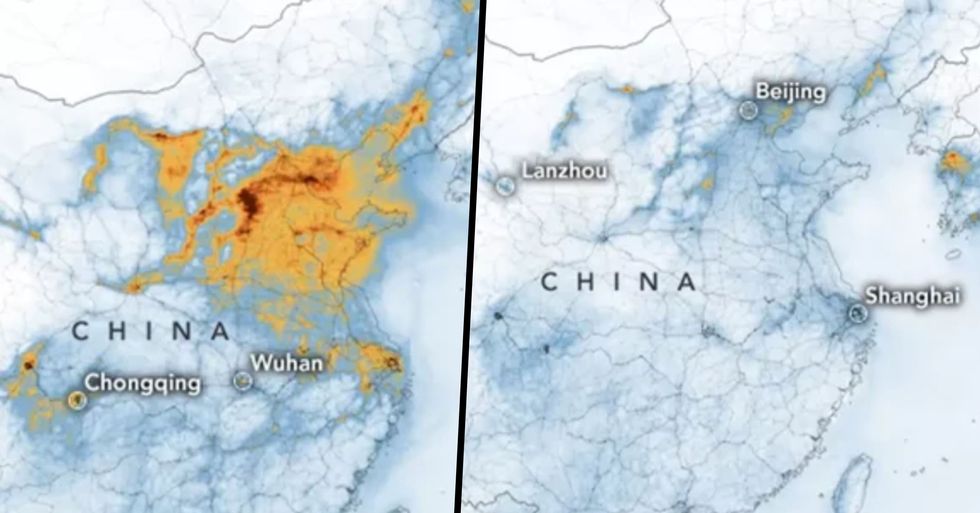 Despite the rising death toll and the mass hysteria the coronavirus has brought with it, the deadly disease has seemingly brought a little bit of accidental good to the world - It has lowered China's alarmingly high pollution rates.

Keep scrolling to see the astonishing evidence for yourself...

It has been confirmed by Worldometer that 3,069 people have now died globally, with the majority being in mainland China. A further 89,842 have been found to carry the virus and be infected.

And now, the first case of the virus was officially confirmed in New York.

New York's supermarkets have been swamped by panicked shoppers over the weekend...

Who, in scenes not unlike zombie apocalypse movies, were frantically stocking up on supplies.

It was truly chaotic scenes.

Footage from one of the city's Costco's showed people rushing to stock up on toilet roll, bottled water, disinfectant wipes, and hand sanitizers.

Similar scenes were seen in one of the city's Chinese supermarkets...

As panicked shoppers flushed the store of groceries.

Evidently, the coronavirus has been causing people to suffer from serious panic...

The coronavirus has actually caused some good... Kind of.

The virus outbreak has seemingly helped the environment...

It sounds ridiculous, but it's true.

China has long suffered from dangerous levels of pollution, which has resulted in tens of thousands of premature deaths every year.

And, because China has been on lockdown for several weeks now...

The pollution, that was once at alarmingly high levels, has now subsided dramatically.

Major cities in the country have been left resembling ghost-towns...

As residents quarantine themselves to their homes in valiant attempts at avoiding the virus.

And now, satellite images have demonstrated this dramatic improvement.

The photos, which track how much nitrogen dioxide there is in the atmosphere, demonstrate the vast decline in these levels over the time period of 2 months.

And, as you can see, they really do speak for themselves.

Within weeks of the quarantine sanctions taking place, the levels of nitrogen decreased dramatically, leaving the map at a safe and satisfactory color of blue.

For scientists, this pollution drop is a world first.

“This is the first time I have seen such a dramatic drop-off over such a wide area for a specific event," said Fei Liu, an air quality researcher at NASA’s Goddard Space Flight Center.

But, regardless of the good the virus has done for the environment...

A cure still needs to be found before it claims the lives of even more people. The coronavirus situation is currently developing, and we will be posting regular updates.