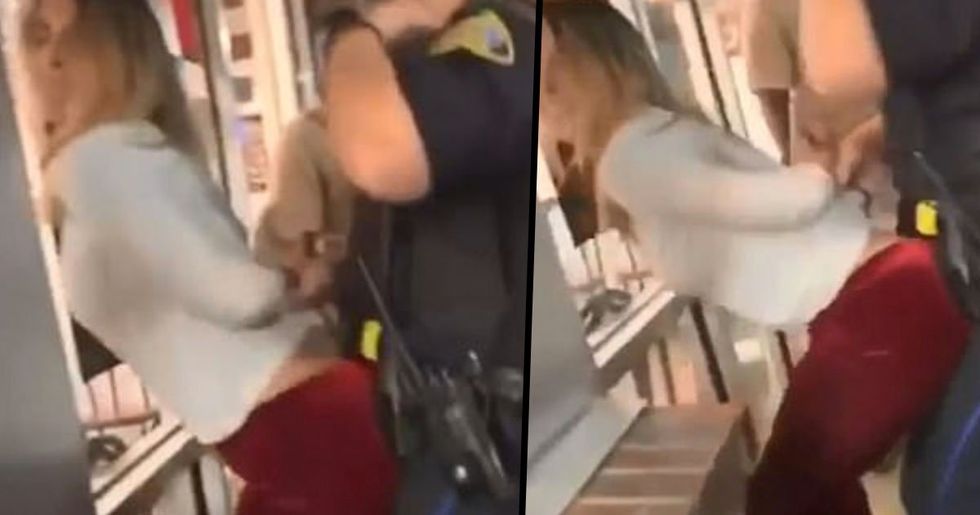 We've all been there when it comes to doing some pretty stupid stuff when we're drunk.

Whether that's eating our body weight in take-out food or missing the toilet by a few centimeters when throwing up, it's a pretty common occurrence after having one too many drinks.

But getting arrested when drunk is certainly not something to laugh about, and one woman is now facing global embarrassment after a video of her grinding on the cop arresting her has gone viral.

Keep scrolling to find out more about the drunk antics that she most certainly regretted the next day...

We all like to have the occasional alcoholic drink every now and then...

But what happens when we have one too many cocktails or tequila shots?

Despite alcohol being fun and just tasting so good, it negatively affects millions of people around the world who don't know their limits.

Alcohol can have a catastrophic impact on behavior.

Alcohol influences behavior in many ways and excessive drinking can be extremely dangerous both physically and mentally.

Studies have found that after heavy drinking, most people’s attention is only allocated to their immediate environment. This explains the attention-related mistakes people make while intoxicated, such as impaired driving. Heavy alcohol consumption also affects our concentration and awareness.

For some people, alcohol can make them very aggressive and angry towards others. We all know these people... they are usually seen getting into some altercation at a bar or yelling angrily over something relatively insignificant.

Self-awareness completely goes out of the window.

When intoxicated, people quickly lose their ability to monitor their behavior successfully and eventually, the attitude changes from being aware and responsible to “who cares?"

This is exactly what happened to a severely intoxicated woman recently...

The unidentified blonde woman was filmed over the weekend at an unknown location being arrested for being way too drunk.

The woman was behaving erratically.

The clip was shared by Barstool Sports, and it shows the police officer pushing the woman, who is wearing a white top and red pants, against a wall in order to handcuff her arms behind her back.

It is also unknown as to why the woman was being arrested...

But it is clear from her absurd behavior that it is certainly alcohol-related.

The woman begins grinding up against the cop...

Spectators are heard guffawing as the handcuffed woman presses her face further up against the glass and utters inappropriate words such as "you like that?" while bending her knees to encourage her behind to protrude toward the officer.

Her behavior was totally inappropriate.

The cop is seen to continuously ignore the out-of-control woman and repeatedly calls for backup.

And she continues to push herself up against the unfortunate cop and writhe around in protest of him arresting her.

The crowd around the woman can be heard laughing...

But despite many finding the clip funny, others have slammed the woman for her drunken behavior.

Gender was brought into the equation...

"This is why I don't want a girl!" one Instagram-user commented.

Will the woman even remember how she behaved?

Another predicted: "She's gonna be the one that files for sexual harassment!"

The clip has gone viral.

But another social media user replied: "Luckily she can't because it was caught on video."

More than 3 million people have viewed and shared the clip.

It is yet unknown as to what happened to the drunk woman, and whether or not she was charged for her inappropriate sexual behavior towards the police officer.

Sexual harassment should never be tolerated.

She should face the consequences of her behavior towards the police officer as if that was an intoxicated man behaving that way towards a female cop, the reaction would be completely different.

The police officer did well to maintain his composure.

And he showed nothing but professionalism and dignity.

Keep scrolling to learn about the woman who was arrested on a beach for wearing a bikini that was too skimpy...