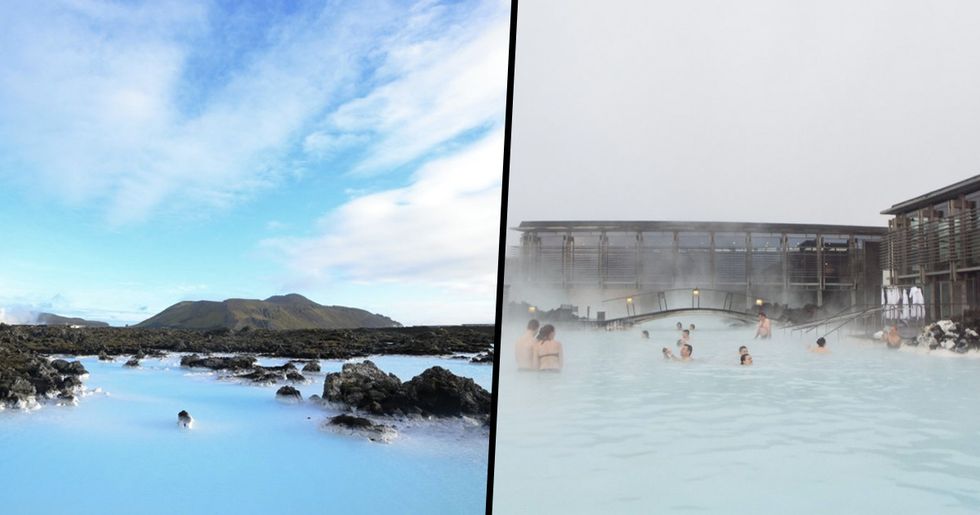 There's a spa in Iceland that people have been losing their minds over for years. It's picturesque beauty and the pinnacle of relaxation, plus, it's in Iceland, so who's even going there in the first place?

Iceland is like the most underrated countries as far as beautiful countrysides are concerned, and this legendary lagoon turned spa is the culmination of that beauty and relaxation. Or at least that's what we were told. But new pictures have surfaced online showing off exactly what this place is, and well, it's not good.

Come see for yourself, and make a decision. Would you pay the hundreds of dollars to visit this once-in-a-lifetime location? Or is it just another tourist trap filled with selfie sticks and drunk bachelors? Maybe a little of both. Read on to see what we mean.

You may have heard of this resort in Iceland.

I'm home for the holidays, and my mom knew exactly what this place was. So, pro tip. If you're home with family right now, ask them if you're not in the loop.

But I can fill you in too.

According to its owners, the Blue Lagoon is a spa in a "volcanic landscape". Maybe that's why it's warm 365 days a year. And like really hot whenever a volcano erupts.

People flock to this place from all over the world.

And it makes sense, I mean look how gorgeous this place is. While I was writing this article, I almost booked my flight.

But there's more to this spa then meets the eye -- and that's not a good thing.

The owners are doing their best to make this place look like an Icelandic paradise, but in reality, it's just another "resort" with a lot of promise and a whole lot less delivered.

It does make for a good totally candid selfie though.

If I wanted to become Insta famous, I know exactly where I'm heading first.

But if selfies aren't your bag, I'm sure you can get someone else to take your photo for you.

Yeah... that above pic isn't unusual for this resort. As with any "beautiful paradise" location that's not going to put you into more debt than you already are, this place is freaking PACKED.

But hey, maybe you can escape it with a nice bungalow?

It's a little extra, but hey, maybe it's worth it for a nice place to finally catch up on your 50 Shades of Grey. I know that's a dated reference, but I'm not super up on my trashy romance novels right now. Work's been crazy.

Where were we, oh yeah, those nice robes.

Good luck finding yours! Everyone gets a robe! It's like Oprah's only favorite thing in 2018 was white bathrobes.

At least it's beautiful. Like don't ruin its beauty for me.

After all, it's Iceland. Isn't the old saying, "Greenland is icy and straight garbage, and Iceland is a green lush paradise"? Or at least something close to that?

Iceland certainly wants you to think that.

Flights to Iceland have cost like $15 for First Class in the past few years. Okay, obviously that's a joke, but at time of writing, a flight from NY to Iceland is only $260.

And it's supposed to be beautiful.

I say supposed because I've never been there and I'm an immediately skeptical person.

The spa, at the very least, is surrounded by factories.

Didn't show you these in those promo pics!

You may be thinking to yourself, "of course they didn't, they're not idiots, it's marketing". Fair enough! But they still uglyyyyy.

Whatever. I can come up with plenty of reasons to still go.

It's crowded, who cares? I love people. It's "ugly"? Well not if I stand in this very specific spot. Still seams peaceful to me!

Okay, but one thing you haven't considered.

The children. The "spa" is family friendly, and when I go to a spa, I want a glass of white wine and exactly 0 children running around.

So that's our piece.

All this work to convince you not to do something. Worth it? Maybe not...

But! We thought it would be funny to share some negative reviews with you. Because that's always fun!

So buckle up, buttercup. Trip Advisor has us covered.

There are groups of loud, drunk dudes splashing and rough housing in the water. If you can get away from the rowdies, you have to dodge the dozens of people wading around intent on filming themselves on their selfie sticks. Some tourists even film themselves in the locker rooms. There should be more control over drink limits.

Okay, not actually. At least I'm not dumb enough to film myself in a bathroom.

Why they decided to allow people to take their phones into the lagoon I will never know. This place is so over rated, in a country of endless natural beauty, don't waste your time here. It is overcrowded, overpriced and full of selfie taking lunatics.

Okay so the selfies are a problem.

Massively over crowded, luke-warm pools with piles of wet towels and shoulder to shoulder selfie-takers. Check-in resembles O'Hare airport at Thanksgiving..and the rest is downhill.

From... the heaters or...? Like I know that water isn't naturally that blue and milky, but is it to cover something up?

Three friends visited the Lagoon for the 7pm session on 11th October. As advised we did not wear our glasses as the lens are likely to be damaged by the silica in the water. We left the dressing room separately as we did not realize that we would not be able to find each other again. We spent over 2 hours roaming the pool looking for each other to no avail. The light is too dim to see especially if one normally relies on glasses. Signposting is practically invisible. It was a horrible experience.

They tell you to take your glasses off and there are no lights at night! These people seem kinda incompetent, but that sounds like a recipe for a lawsuit.

Great title. We stayed 15 minutes, then we went out to shower. And here again, there is no shampoo, just conditioner...I mistakenly wet my hair with the lagoon water.....no way to put my finger in...my hair was full of knots...it took 4 shampoos and a half bottle of conditioner to rescue it.

Beware of your hair.

This person either has insane hair, or there's a troll in the lagoon that's tangling tourists' hair for sport. No other options.

Dont bother with the advice that you have to shower before getting in, the water in the lagoon is basically being ruined by people drinking alcohol, getting drunk, and spilling all their drinks into the water. I didn't have to shower before getting in, they didnt care, but funny enough was yelled at for not showering before trying to change after getting out of the lagoon. Maybe they know its not clean water anymore.

So they don't sterilize the water at all. And there are hundreds of people (and kids!) a day who get in without showering first. I don't want to visit anymore...

But what about you?

The pictures are beautiful! Are you still intrigued or are you totally put off by this place? Have you been before? If so, let us know what your experience was. We'd love to hear.