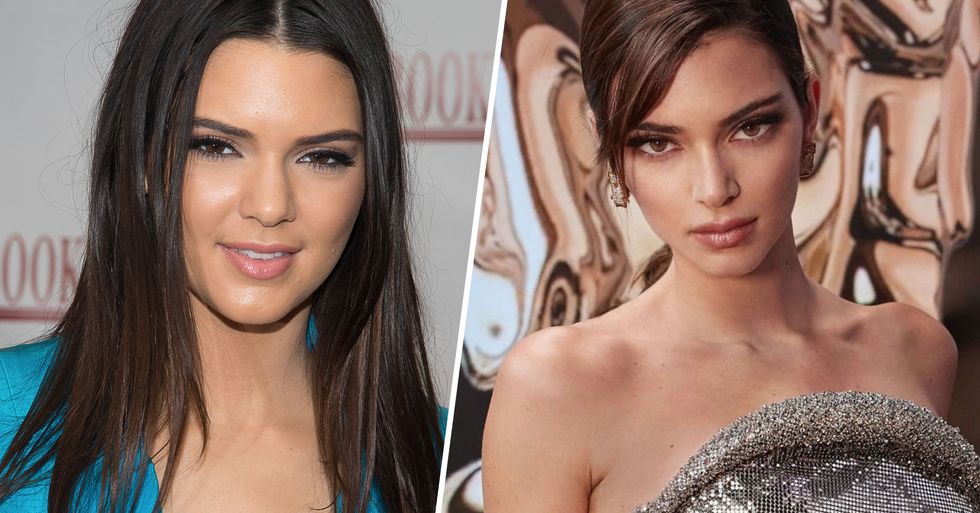 Being a celebrity is difficult when you're constantly under the watchful eye of the media, as well as your own fans. It starts becoming a difficult task keeping up with the pressures of being the "perfect" role model.

This is why a lot of our favorite stars have turned to cosmetic surgery to rectify their "imperfections." One particular Instagram account collects before and after photos in order to compare the apparent differences. We've compiled a list of some of the best ones for you so you can decide if you think the work has been done.

In no way, shape or form do we think any of these celebrities are unattractive, or less worthy because they have had "work" done. This is simply a comparison article for those of you who are intrigued.

Here are some before and after shots of Liam Hemsworth after having his nose re-shaped.

Fans couldn't help but point out that the American singer-songwriter looked completely different from her initial audition tape.

In her most recent photo (on the right), it is said that Eilish has also had a small nose job, but she's also had lip fillers too.

From her jawline to her nose to her eye shape, Carson has undergone a few little surgeries to "enhance" her look.

"I think she had some very obvious work done on her eyelids. Her eyes used to be hooded, now they are open and the eyelids are way bigger. I suspect a tiny nose job too since her nose bridge seems to be thinner."

After a slightly botched rhinoplasty and some botox fillers, she has given herself a different look. However, she's always had good features.

This one was a difficult one for the Instagram account to decide on because apparently the "amount of makeup" she wears now distorts the features.

Another little nose job just to reduce the bridge and the tip.

Hill's had obvious lip fillers, but she's always been beautiful.

"Jennifer Aniston before and after. Jen has admitted to a nose job, although not to a cosmetic one. She said she only fixed her deviated septum. It's clear that she had a tiny cosmetic nose job, i also see some fillers at the jaw, they filled in the jaw so the chin seems to stick out less. Her lips are thinner due to aging."

Priyanka has had a nose job in order to reduce the point she had on the tip.

Grande's before and after shots show that she's had an eyebrow lift, lip fillers, a nose job and possibly some work done to reduce her smile lines.

Here's another Ariana comparison shot for you.

"So as you can see, Angie's lower lip became smaller. A lot of you said it's because of aging because when you age, you loose volume from your lips. But then how is it possible that only her lower lip lost volume and her upper lip didn't. Meanwhile her upper lip actually got bigger and wider. I'm a 100% sure that Angelina had her lower lip reduced surgically. Yes, by aging you loose volume in your lips but not that much and your whole lip shape isn't going to change just by loosing volume. Surgical lip reduction is totally possible, it's a very short and quick surgery under local anesthesia. I'm sure Angelina had it done besides top lip fillers to make her lips more proportional."

"The next thing is the jaw and chin area. As you can see she had a rounder face when she was younger, then it became angular. A lot of you have said that the change is because of losing baby fat. But please, just because you lose baby fat you're bone structure is not going to change..."

"Your face might become more bonier but not that much...How is it possible that her chin is bigger and her jaw is located lower on her face? How is it possible that her jaw sticks out so much nowadays? I think there's only one good reason. I'm convinced she has a chin and jaw implant. It's possible guys....look after. Back in the days fillers weren't a thing, that's why I think she had implants."

From 2010 (left) to 2018 (right), Kesha's had a few surgical procedures done: Lip fillers, cheek fillers and an eyebrow lift.

"We all know Emilia's had lip fillers but has she also had an eyebrow lift?"

Obviously, we all know the Jenners like a good cosmetic enhancement or two. Kylie's had almost every feature on her face re-done. From a nose job, lip fillers, a chin reduction, the re-shaping of her eyes, and a very noticeable and permanent fake tan.

We can't forget the other member of the Jenner clan, can we? Kendall's had lip fillers, a nose job, an eyebrow lift and some chin fillers to reduce her jaw size. She's also had her teeth re-done, but who hasn't right?

Apparently, a lot of fans dislike her nose job...

"The tip of the nose is less wide now, I see a subtle nose job. Agree?"

Even the all-time greats have had a little job done here and there.

"Do you realize how much higher her eyebrows are? And her eyes are less hooded too."

Others had their own opinions claiming that she also has lip fillers and jaw injections.

Madison's been through a few procedures from an eyebrow lift to a nose job, to lip fillers. She's always been gorgeous though.

Some people commented about how she fell into the whole "Kardashian" trend, but if that's what she wanted, it's her choice.

Though Demi's look hasn't changed much over the years, the owner of this account believes she's had little jobs done over time.

"Honestly I think she had a nose job and a blepharoplasty. As you can see, her nose bridge is thinner, the tip is smaller and more refined. It's definitely not the contour. Her eyelids are less hooded, more open and more visible. Makeup can't remove the excess skin. Focus on her eyes and nose here on the first picture."

A lot of the comments under this post suggest that fans think she "looked better" before, but who are we kidding? She always looks good.

We can see a slight nose job here, but it seems to be a consistent trend in the world of female celebrities.

"I know a lot of you would say she has top lip fillers but, at the time, lip fillers weren't a thing. She definitely had silicon top lip back then."

"Her nose is smaller and her eyelids are bigger. What do you think?"

I really can't see much of a difference here. I think age is a big factor in Dakota's sharper features.

And hair and make-up are everything.

The Pretty Little Liar's star had had some enhancements on her eyelids to make them bigger and more visible now. Her lips are also thicker and when she smiles her jaw is not angular anymore, it's oval. I'm sure there's some botox involved there.

A fan mentioned that she's starting to look a lot like Courteney Cox. It's a good thing they're both beautiful women, so it's definitely a compliment.

"The best job I've ever seen. She's had a lot of work done yet she still looks natural." I totally agree.

These photos don't capture Britney in the best light, but her nose job looks to be pretty extreme.

A definite nose job and lip fillers. But what about a blepharoplasty? Many fans are convinced she's undergone that procedure too.

Olivia's had a few procedures too, from lip fillers to a nose job but the highlight has to be those cheekbones! I'm here for it, even if you aren't.

Many fans are debating if Jen's had a nose job or not. From what I can see, she hasn't. I think her contour game has gotten stronger, but what do you think?

A nose job, but other than that, Johanson has always looked really good.

One fan commented this: "I really feel like this rhino was unnecessary. her nose suited her perfectly and there was nothing “wrong" with it. She’s lost a little bit of character." They do say your nose defines your entire face.

It seems as though a lot of celebrities aren't happy with the shape or size of their nose. Blake's also had a nose job, but it wasn't a massive one.

Fans suspect that Jennifer's had some botox in her forehead as well as the typical nose job to adjust the bulb.

Makeup always makes a difference so these pictures can't be accurately compared, though the most obvious change has to be her nose.

There's some botox work done here and there and lip fillers, but Hailey looks pretty much the same since her debut into the celebrity world.

Ciara hasn't aged a day. Her face shape has changed a lot and her nose has definitely thinned out so she has had some cosmetic work done.

Some fans believe she looks like a completely different person, but to be honest, the difference isn't too extreme.

From these pictures, her nose has been thinned out a lot.

Lea's nose job saw her reduce the tip immensely as well as color the bridge so that it fits the new shape better.

If there's one woman who has aged beautifully, it would be Kelly Rowland. Fans believe that she's had a little bit of botox, but that's pretty much it.

Another nose job and eyebrow lift. It seems as though a lot of women go through the process to give them a slightly less "droopy" appearance.

Here's another Camila comparison shot. So what do you think? Did anyone surprise you? Either way, work or not, these celebrities are all beautiful.