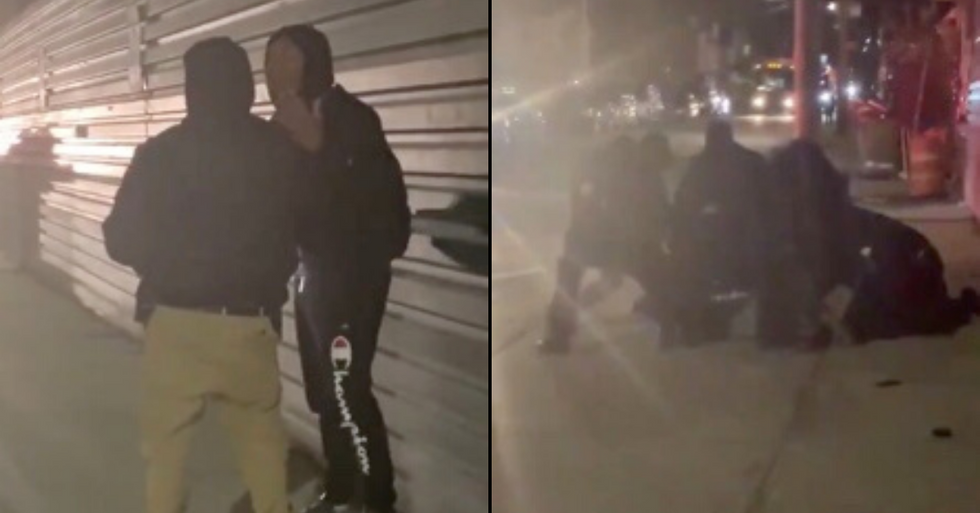 It's no secret that police brutality against black people has truly gotten out of hand over the years.

More and more innocent people are being harassed and tormented just because of their race, and nothing is being done to put a stop to this unnecessary violence.

A video has emerged online this week of an innocent black man being stopped by the police who inflict some inexcusable violence upon him.

It is a devastating fact that being shot by a police officer is a leading cause of death here in America.

"That 1-in-1,000 number struck us as quite high," said study leader Frank Edwards, a sociologist at Rutgers University. "That’s better odds of being killed by police than you have of winning a lot of scratch-off lottery games."

This makes black people twice as likely to die at the hands of a police officer than white people...

And nothing much has been done in the last few years, despite these harrowing statistics.

It has been predicted that around 1 in 65 deaths will be a black person at the hands of the police.

"This epidemic is disproportionately affecting black people," said Brittany Packnett, an activist and member of the White House task force on policing. "We are wasting so many promising young lives by continuing to allow this to happen."

The police use racial profiling from criminal records...

And this is why black people are more likely to be randomly handcuffed, searched, and detained than white people.

The majority of black people targeted by the police are innocent...

And it is terribly sad that the police force are stereotyping these young people who have so much potential.

So growing up in America as a black person is not easy...

And sadly, nothing seems to be changing.

A video has surfaced online this week...

Criminal Defense Attorney Dr. Rebecca Kavanagh, who regularly campaigns for the rights of black people in America, posted the shocking footage on Twitter this morning and it truly outlines our country's biggest problem at the moment.

The video was filmed in Brooklyn, New York...

And it shows an unidentified young black man being stopped by a plainclothes officer because he was (apparently) in a park shortly after its 9 pm closing time. The young man can be heard saying, "I didn't commit any crimes so can you get off me" as the officer pushes him against a wall.

The woman filming can be heard telling him not to worry and to try and stay still...

The officer continues to push the man further against the wall as he protests, with him continuously saying, "I didn't do anything" and asking, "what did I do?"

A police car with its lights on soon turns up to assist...

The man continuously asks why he is being arrested and what he has done wrong, and it is clear that he is gradually becoming more and more distressed... which is when things begin to go downhill.

Other police officers are seen running to the scene...

Which is completely unnecessary as this poor man is innocent and he hasn't done anything wrong.

This poor man is then forced to the floor by 4 police officers...

He is heard to be screaming and protesting as they forcefully push him down. "Let me go!" he was yelling as the officers get even rougher with him as they restrain him - even though he wasn't resisting at all.

Dr. Kavanagh posted a second video to show even more police officers piling up on the man...

The woman filming is clearly shocked by what she is seeing, and she can be heard repeatedly saying how the man has done nothing wrong at all.

The man is now screaming for help...

And it is very difficult to watch. The man ends up being laid completely flat on the sidewalk with around 6 officers sitting on top of him and restraining him completely as he wails in pain.

It is utterly disgusting to watch...

Dr. Kavanagh tweeted: "This young man is clearly terrified because he is being held at gunpoint by a cop (who doesn't even identify as a cop). Like anyone would be. But he is fully cooperative. He doesn't do anything that would have needed more than one cop to calmly arrest him."

Sadly, this is nothing new...

"I often think that police brutality against Black and Brown people on NYC subways has really just made more visible this sort of police violence that has always existed in Black and Brown communities. White people are now more cognizant of it. But it is nothing new," she went on to say.

Thanks to the magic of social media...

The woman who was filming the ordeal was tracked down on Twitter. Her name is Velvet, and she spoke out about how she sadly didn't know who the man was.

She is angry over this horrific situation...

And she outlined how unnecessary it was for the police officers to wrestle the man to the ground when he wasn't being violent, he didn't commit a crime, and he wasn't armed with a weapon.

People are furious with the NYPD...

And they are calling them out for ignoring and abusing the rights of black people.

The NYPD is yet to comment on the incident...

And it is currently unknown as to what happened to this unfortunate man. We sincerely hope and pray that this exposure to the way police officers here in America treat the black community will eventually make some sort of difference.

Watch the harrowing video for yourselves here...

Make sure to keep scrolling to learn about how a Family Matters clip from twenty-five-years-ago about police brutality is still shockingly relevant today...
20%