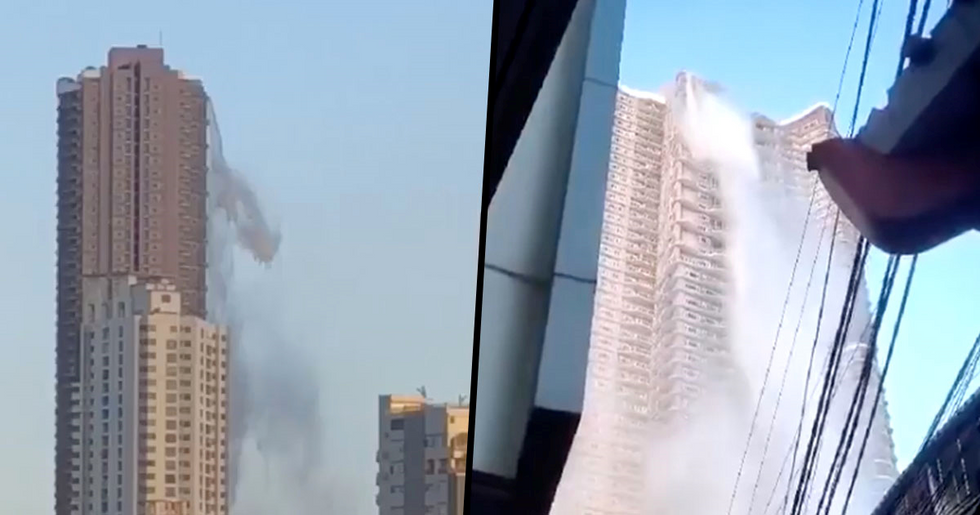 A powerful earthquake struck the Philippines on Monday causing masses of devastation and destruction. The earthquake tragically killed at least eleven people.

The quake, registered as having a magnitude of 6.1 on the Richter scale, hit the province of Pampanga the hardest. It was here in which a four-story building in the town of Porac collapsed and trapped up to ninety people underneath the rubble.

Rescuers across the region have fought heroically to free those who have been trapped, but it's feared that the death toll will continue to rise.

Distressing images have been released both as the earthquake happened, and of the aftermath. One of the videos that has particularly shocked the internet shows a rooftop swimming pool turning into a real life waterfall.

Scroll to the bottom of the page to see the video - it has to be seen to be believed - but, first, here's a little background information.

We all know what an earthquake is, even if we haven't experienced one personally.

Most likely, the first thing that comes to mind is the shaking of the ground. But earthquakes can also cause landslides, tsunamis, ground ruptures and liquefaction. Fires are also common occurrences in the aftermath of an earthquake.

We bet you didn't know this fact...

It's estimated that millions go unrecorded! This may seem like a lot, but earthquakes with a magnitude of two or less can occur several hundred times a day across the world. In fact, an earthquake that measures at a magnitude of three or lower is so weak that nobody even feels them.

But what actually causes earthquakes?

An earthquake usually occurs when rock underground suddenly breaks along a fault. It is the sudden release of energy that causes seismic waves that makes the ground start to shake.

Where are they most likely to happen?

Indonesia and Japan are situated in very active seismic zones meaning that they are both prone to earthquakes. In the U.S, Alaska registers the most earthquakes, with Oklahoma coming in second place. Florida and North Dakota are the states with the least number of registered earthquakes.

The most powerful earthquake ever recorded was in Chile in 1960.

This epic earthquake struck the area of Valdivia and had a magnitude of 9.5 on the Richter scale! The tremor caused tsunamis that severely battered the Chilean coastline with waves that were recorded up to twenty-five meters high.

And the deadliest was in China way back in 1556.

The earthquake in question had a magnitude of around 8 which is not one of the strongest ever recorded, but it did result in the largest death toll. A tragic eight-hundred and thirty thousand people were killed in this earthquake with damage stretching as far as two-hundred and seventy miles.

The Phillippines is also known for having frequent earthquakes and volcanic eruptions.

This is because it is situated on the Pacific Ring of Fire, an area within the basin of the Pacific Ocean. Around 90% of the world's earthquake eruptions take place along the Ring of Fire.

Tsunamis have also previously occurred there.

The strongest tsunami in the Philippines took place in 1976 and it reached a height of nine meters! And if you think that is high, just wait until you see the rooftop waterfall which cascades down a six-hundred-foot skyscraper...

There have been several catastrophic earthquakes over the years in the Philippines.

Most notably, one that took place in 1990 on the northern island of Luzon. More than two-thousand four-hundred people were killed by this earthquake which had an estimated magnitude of 7.8,  making it one of the strongest tremors to have ever occurred in the Philippines.

And then, in 2013, another major earthquake hit.

The earthquake had a magnitude 7.1 tremor which killed more than two-hundred and twenty in the center of the Philippines.

And, on Monday, another powerful earthquake struck the Philippines.

The earthquake of 6.1 magnitude struck the Northern Philippines, leaving a trail of destruction in its wake including a lot of damage to Clark International Aiport. At least seven people were injured there.

The province of Pampanga was hit the hardest.

There have been eleven fatalities and over one hundred injured so far, and the rescue mission still ongoing.

She said: "They can be heard crying in pain. It won't be easy to rescue them. The rescue is ongoing, they are still hearing a sound, no one can say how many were still trapped."

The country's capital was also affected.

The earthquake struck sixty killometers northwest of Manila, but still managed to cause damage and destruction in the capital. Residents were forced to flee from buildings and many were injured by falling debris and rubble.

Hundreds of people were also evacuated as a precautionary measure.

As well as in Manila, people were also evacuated from Quezon City, Mandaluyong City, Pasig City, Taguig City and Makati.

Rescue crews are currently assessing the level of damage across the region.

They fear that they could find further fatalities within isolated hamlets that have lost their power and means of communication.

One of the main areas being searched is the town of Porac, which is located around sixty-seven miles northeast of Manila.

A four-story commercial building collapsed within this town and seven people have since been rescued, but the search for more survivors is still ongoing.

According to the Mayor of Porac, trapped people could be heard screaming from the building.

Mayor Condralito Dela Cruz explained how brave rescuers struggled to save those stuck under the collapsed building who were understandably terrified.

Onlookers could be seen watching the rescuers with fear in their eyes.

As you would expect when a building has just collapsed with nearly a hundred people inside it!

The Saint Catherine Parish Church in Porac was the most badly damaged religious building in the region. Its bell tower had collapsed and the head of one of the statues had also been destroyed.

It has been revealed that the quake was caused by movement in a local fault.

Renato Solidum, who is in charge at the Philippine Institute of Volcanology and Seismology, confirmed that a local fault at a depth of eight miles near the town of Castillejos in Zambales had caused the earthquake. He also went on to explain that it was not powerful enough to cause a tsunami.

And as if one earthquake wasn't enough...

A second quake hit the country the following day near the Eastern Samar Province, but, thankfully, this one was less powerful and resulted in no casualties or serious damage.

It has been confirmed that the two earthquakes are not related.

Renato Soildum has confirmed that the two earthquakes are not connected. He said: "The ground is hard in mountainous Castillejos, while the soil in Pampanga towns of Porac, Floridablanca, Lubao, and Angeles are soft due to lahar deposits."

Local people have taken to social media to show the extent of the damage caused by the quake.

Buildings were destroyed and places of worship were damaged, but one resident really had it bad... He said: "The clothes hanging on our line was really swaying. My dog dropped flat on the ground." Really?...

The ground was literally ripped apart.

One resident shared this shocking picture from their home in Porac. Just imagine if you were standing on that spot when the earthquake struck.

And in this video recorded in Porac, you can actually see the shaking of the quake.

The destruction that was inflicted on the local people and their homes is clear to see in this video.

And in what is one of the most shocking images...

Water from a rooftop pool can be seen falling six-hundred feet down a skyscraper in Manila following the powerful quake. It literally has to be seen to be believed and we have not one, but two videos below...

The residential skyscraper in question is called the Anchor Skysuites.

And can be found Manila's Binondo district. It is one of the tallest buildings in the area, which makes what happened even more mesmerizing to watch.

As you can see in this first terrifying video, the water only makes it halfway down the building.

Before it becomes little more than a wind-swept mist... We bet that those looking on got a bit wet!

In the second video, credited to Michael Rivo, you can see the full scale of the building and the epic amount of water cascading down it.

Thankfully, the region did not experience a real tsunami; the destruction caused by one of those would have been a lot worse...