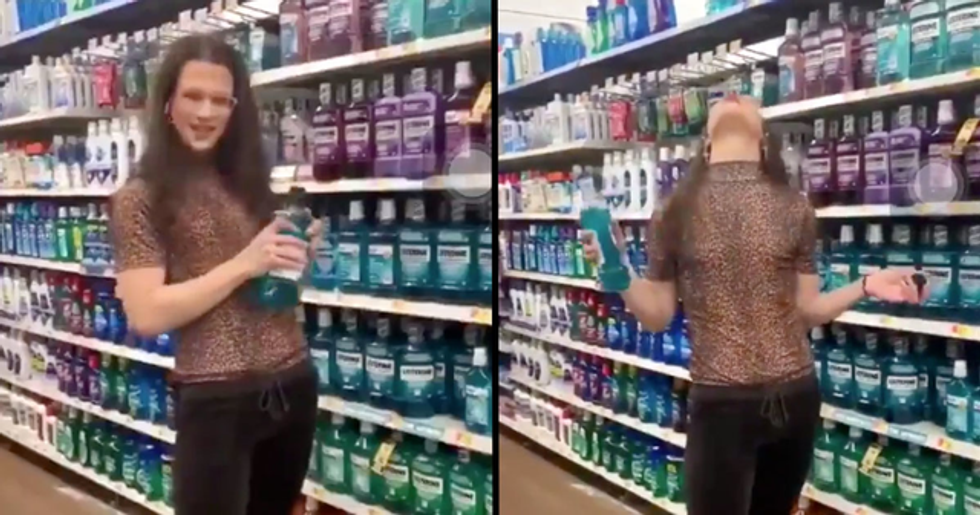 Shopper Gargles Mouthwash, Spits in Bottle and Then Returns It Back to the Shelf

What is it with 2019 and viral videos of people messing with products in supermarkets?

This year has seen an influx of people filming themselves tampering with food and drink in supermarkets and then placing the items back on the shelf for innocent and unsuspecting shoppers to purchase. Just... Why?

Anyway, a new video has gone viral this week showing a shopper in Wallmart striding up to a shelf of Listerine mouthwashes, opening one, taking a gulp from it, gargling it and then spitting it straight back into the bottle. Yeah, I can't make this stuff up.

The video has, of course, gone viral, and people are speculating whether the girl did it for real, or whether it was just a stunt for a taste of viral fame. Either way - not cool, girl.

This year, we have seen a rise in viral videos of people contaminating supermarket food and drink...

By either licking, eating, or drinking them and spitting it back out. Oh, and then putting the contaminated items back on the shelf for other shoppers to purchase and, eventually, consume.

Because this is the world we're living in, folks.

I don't want to live in this world anymore. People are becoming so desperate for a taste of fame, or simply have so much time on their hands, that they will do quite literally anything to go viral.

Like the guy who decided to eat a tub of ice cream without actually buying it.

Twitter user, LARZ, was filmed marching up to a freezer, opening a tub of ice cream and literally clawing ice cream out like a frenzied animal, and then hastily eating it with his bare hands.

He claims that he started the viral trend.

So you have this guy to thanks for this god-awful new trend, ladies and gentlemen.

The police were quick to get involved.

It's unclear whether he was actually reprimanded, but he joked about it on Twitter later that day, tweeting that he had "just left the police station," but had "too much clout to care." You stay classy.

And we all remember the girl who licked the ice cream tub...

This video caused a whole lot of outrage when it went viral last week. A young woman was filmed in the Bluebell ice cream section selecting a tub, opening the lid, and quickly licking the top of the ice cream.

And, just to add salt to the wound...

With the encouragement from her friend who filmed the full thing, she put it back in the freezer and ran away giggling, leaving the contaminated tub to sit in the freezer ready for some poor soul to take it home.

Though these pranks carry with them serious consequences.

The Lufkin Police & Fire Department posted an appeal on their Facebook post in an attempt to identify the perpetrators and informed their followers that the girl in question is facing a second-degree felony for tampering with a consumer product. Yikes.

Sadly, the trend hasn't stopped there.

This week, someone else's pathetic attempt at going viral has, well, you guessed it... Gone viral.

But, this time, there was no ice cream involved.

A shocking turn of events, I know. The video in question was filmed in a Walmart (exact location is unknown), down the dental hygiene aisle.

The product of choice was mouthwash.

Bit of a change from ice cream, but, hey, to get viral you need to do something a little of out the box, don't you?

Twitter user, Bameron Nicole Smith, posted the video on her feed last week, which showed her striding confidently up to a shelf of Listerine mouthwashes.

Then, things got gross.

Smith went on to grab a bottle, unscrew it, take a large gulp, and gargle it, commenting "Mmm, nice and minty and fresh."

She then spits it back into the container.

I didn't know that such levels of disgusting even existed. And, sticking to tradition, she places the bottle back on the shelf and struts off, waving at the camera and saying smugly "thank you, guys."

The video, which was captioned with, "you bitches with no oral hygiene could take a hint," has now reached over seventeen million views and has, understandably, caused a bit of a stir online.

Walmart has since spoken out about the incident.

Speaking to the Daily Mail, a Walmart spokesperson said on Friday: "We are investigating this incident. If someone tampers with a product and leaves it on the shelf, we will work with law enforcement to identify and prosecute those found responsible to the fullest extent of the law.'

Though the prospect of arrest didn't seem to faze Bameron...

The following day, she shared a picture of herself posing with a bottle of Listerine and matching blue eyeshadow. And her sass didn't stop there. One social media user commented: "Another one for prison. Hope you have fun with your new inmate friends," to which Smith replied: "I LOOKED IN THE CELL NEXT TO ME AND ITS THE ICE CREAM GIRL."

Though homophobes and transphobes alike were quick to use the video as an excuse to hurl abuse at Smith.

the video has nothing to do with me being trans. so when im getting called all sorts of slurs then yeah its transph… https://t.co/Z9RMbTlwOM
— clown doll (@clown doll)1562206412.0

A person's sexuality or gender identity really doesn't have anything to do with this gross prank, does it?

Though the whole thing may have been staged...

@bameronkaii This is clearly staged, why is that the only bottle without a seal? Regardless all these consumer prod… https://t.co/gVVBEQtuvr
— Ross is trans™ (@Ross is trans™)1562193245.0

Some eagle-eyed Twitter users noticed that the bottle that Smith picked up had no seal, as she was able to open the lid straight away. This could suggest that she had bought the bottle prior to making the video.

Smith herself may have provided the evidence that we all needed...

The day after the video exploded online, Smith posted a selfie while holding up a Walmart receipt, captioning it with: "I love mouthwash and ice cream." Though the receipt is too small to read, we hope that this is the proof that she had bought the bottle of mouthwash, and it wasn't left for some unfortunate shopper to pick up and use themselves. But, moral of the story - Just don't tamper with supermarket products, kids. It isn't funny, it isn't cool... And it could land you in prison for a very long time. For more on the ice-cream girl, keep reading.