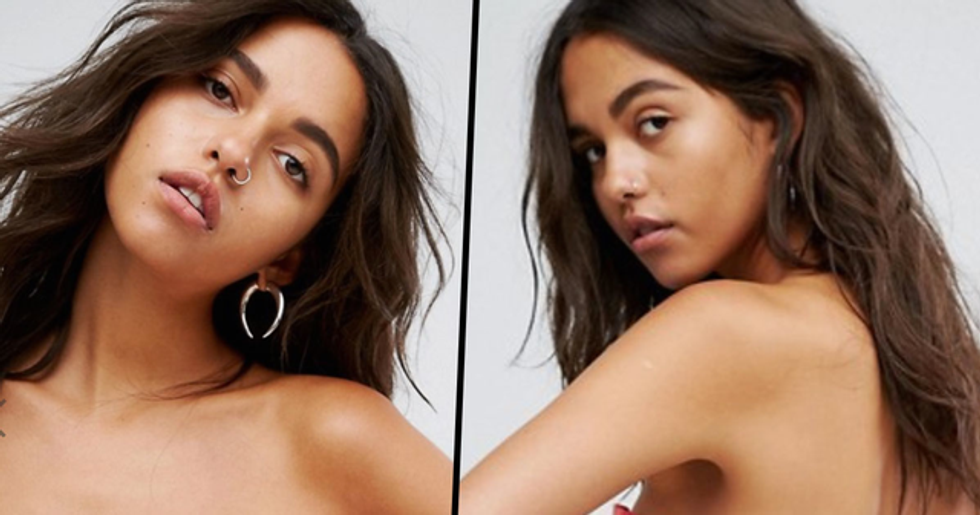 The world of fashion is one that is constantly evolving with trends popping up left, right and center, and I just can't keep up with it all. Once I'm on the bandwagon with something, the trend is suddenly not in fashion anymore and I'm just left to complain about how I never wanted to be part of it anyway.

There are some things that I can put up with, but there are a lot of things that are just too ridiculous to turn a blind eye to... Like dresses that resemble a sack of onions.

Literally. There is a dress that looks like a sack of onions.

One Twitter user has shared her opinions on a slightly questionable looking dress featured on the shopping website, ASOS. And, hilariously, she isn't wrong. The dress literally resembles the red netting that onions come packaged in. I love the internet sometimes.

Keep reading to see the incriminating dress... Oh, and a few other of my favorite fashion hiccups, just because they're too damn hilarious.

I'm not saying that there's anything wrong with these tops, but... well, I am. These should not be a thing and I will not support any male that wants to be a part of the crop-top movement.

It's the pockets that don't do it for me. What are you supposed to keep in there? Your keys? And the price really isn't going to work out for me either. These boots are currently being sold for $1,600.

These might be a bit weird, but it's one of the only items on this list that I am loving. When no other shoes will match with your outfit, these will always have your back. Practical and stylish, what's not to love?

Just when you thought that crocs couldn't get worse - they do. And these ugly shoes will cost you over 500 dollars. Save your hard-earned money and go get yourself a pair of flip-flops.

For block-color lovers like me, this has to be my worst nightmare. This kind of dress is not for everybody, so purchase with caution.

Imagine walking down the street and stepping in a puddle with these on. Soggy sheepskin shoes. How appealing.

I might as well mention this while I'm out here talking about fluffy trends. Fluffy eyebrows weren't too bad until people tried braiding them. Then it all became messy.

This is another one that you either love or hate. After crocs with socks, we obviously have to mention socks with sandals in general, because the trend is well and truly a thing in society now. After seeing these sheer socks paired with cheetah print platforms, honestly, I'm sold.

Balenciaga has been known for its weird fashion trends, but it doesn't get much weirder than this. Car mat skirts. It's a no from me.

Double denim is already quite risky, so why the hell would you want to wear these out? And for $500?!

That's it, just the sleeves. For those summer days when you're missing winter.

Would grown adults buy themselves a pair of these? ASOS seems to think so.

Metallic meggings (leggings for men) have made a comeback and we still aren't here for it.

Credit where credit is due, this is pretty artistic. And it's good for adding an extra foot to your height. But I don't think that I'll be walking around with flowers on my head any time soon.

This fashion trend made a comeback late in 2018 and has managed to seep through into 2019. I was never a fan of bucket hats in general, but it's a trend that is slowly growing on me.

If you're not going cycling, stay away from these shorts. And never wear them with heels. Ever. They're not as cute as you think.

These handbags are cute and trendy and, just like the transparent shoes, I will be getting myself one of these. The only thing that I won't be doing is carrying what I usually carry in my non-transparent bags.

I'm just going to leave this here and move on... Lace shorts for men are an actual thing and they come with a matching lace shirt for all of you that want one!

Are they shorts? Are they pants? I think they're meant to be a bit of both... Joggers are supposed to be the comfiest piece of loungewear, but I can hardly imagine sitting in a pair of these with the detachable straps digging at my legs. I really do love you, Rihanna, but these are a no from me.

This one is definitely not for winter. I wonder what possessed the designer to cut out the shoulders from this jacket? It seems a bit impractical, but I guess it might be good for the beach? But, to be honest, I would advise against purchasing one altogether.

Yes, you read that right. Muddy jeans. Jeans with mud on them. You'll be happy to know that it isn't actual mud, just a design. But that doesn't make them any better. Why on Earth would you spend four hundred and thirty-seven dollars on dirty jeans when you can probably by a pair for ten dollars and roll around in dirt? It's basically the same thing.

If you find yourself loving the jeans, here's a matching jacket for you, so you can get the full muddy look. Don't be shocked, both items are currently sold out on the website. Yes, there are people out there actually paying 500-odd dollars for these fashion disasters.

You really thought that I was done telling you about ugly shoes? Because I'm not. I present to you, the Ugg Sandals by Ugg and Teva, the ugliest shoes to ever grace the planet. I would rather wear a pair of Crocs (with the socks!) than walk out of the house in these and that's saying something.

When you can't decide if you want to wear a skirt or a pair of jeans, why not wear both? I'll tell you why, because it looks horrible. These are currently being sold on the Topshop website for fifty-eight dollars.

This is the swimsuit that had the whole world talking. Imagine walking to the pool and seeing everyone wearing one of these. I do get the comedic value behind it, but, overall, I'm not a fan and I don't think that anyone else is either.

There's more than one thing wrong with this outfit and you could probably name all of them from a quick glance. First of all, neon green is a color that should only be reserved for Hi-Vis clothing. Secondly, I think we already established that mesh print needs to go out of fashion, right now. And don't even get me started on the flares...

If you want to walk around looking like a big marijuana enthusiast, then I would highly recommend buying this suit for a hundred bucks. Don't wear it to a job interview though, it might give off the wrong impression... You don't want to look like an idiot, do you?

Ugly shoes are just ugly shoes, no matter who designed them. Imagine paying a thousand dollars to have your toes separated in the most uncomfortable manner. Doesn't sound too appealing, does it?

And, for the one you've all been waiting for...

The onion dress. Okay, it isn't actually a dress made from onions. But it definitely resembles the red net packaging that white onions are sold in.

To refresh your memory...

Just in case you haven't purchased white onions in a while.

The garment in question is the Elissa Poppy Lacetex Slipdress, which was originally put online for $553, but is now in the sale for $331. As you can probably see, the dress is made of a strange red mesh material, which has been compared to red onion bags. I mean, just look at it.

And a different angle doesn't improve it.

Nope, still looks like a sack of onions... Just with a lace-up corset added to it. The dress is apparently not too easy to wear, with the website recommending that wearers apply talcum powder if they want to get the garment on with ease.

People were, quite understandably, baffled.

One bemused Twitter user, Jay Sharif, shared the picture of the incriminating garment and contrasted it with a picture of a sack of onions... You know, just for contrast. He wrote: "350 for a dress that looks like onion bag sack allow that. #dress #wtf #asos #onalevel #ripped." Note: "Allow" is London slang for "leave it alone" or "don't worry about it". Allow that!