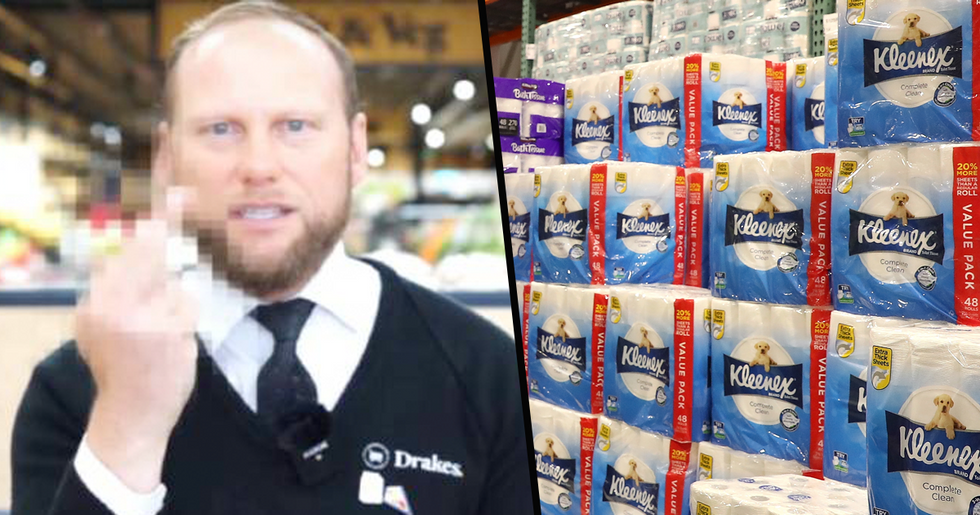 Despite people turning to social media to shame those selfish enough to be stockpiling supplies, this still seems to be a problem, especially in Australia.

One customer even had the gall to waltz right back into the store after doing the unimaginable, but he wasn't prepared for the response he got.

Stockpiling is still happening in certain parts of the world.

It seems as though people aren't understanding that simply buying a month's worth of groceries won't help you survive compared to other normal folks who have opted not to panic buy.

And as the virus continues to infect the globe...

People seem to be getting selfish.

Amid all the panic and hysteria...

Shopping and stockpiling seem to have shifted into the same meaning.

People seem to think that buying a years' worth of toilet paper will protect them from the virus...

Oh, alongside thirty cans of tomatoes. Because that makes total sense, right?

Mothers with no diapers. The elderly with no food. It just simply isn't right.

People have taken to social media to express their disgust.

And it seems to be gradually making people think twice about panic buying.

Although there's always going to be ignorant people out there.

Looking out for themselves before thinking about others, which is the worst thing you can do at a time like this.

Some even tried to make a profit from it...

That's right, people have been price gauging to make a profit out of the essentials people need.

That's what one Australian shopper did, and now he wants his money back!

He went into one of South Australia's Drakes' supermarkets and tried to make a deal.

What he wanted was crazy...

The supermarket director said: "He said he wanted to get a refund on 150 32-packs of toilet paper and 150 units of one-liter sanitizer."

Mr. Drake said he couldn't believe his ears when the shopper asked to return the items he had purchased.

The receptionist called Mr. Drake over to deal with his request.

The customer wasn't expecting this response from Mr. Drake, which can be seen in the video.

Drake said: "This sort of behavior is disgraceful. He is the sort of person that's causing the problem in the whole country."

But that didn't stop the shopper from trying to make a deal.

He came in the next day to try his luck. Drake said: "He had all the receipts, he came back and offered me a 30 percent discount."

It's been revealed that the shopper would have had to come into the store 150 times to make the purchases.

Mr. Drake continued: "We're all about supporting the local community. I want products bought here to stay here but this is ridiculous."

Mr. Drake's brutal response is everything...

It has been discovered that the man had been working with a whole team of shoppers to buy the high- demand items to sell on at an inflated price. Keep scrolling to check out the brothers who hoarded over 17,700 bottles of hand sanitizer. This behavior is abhorrent...