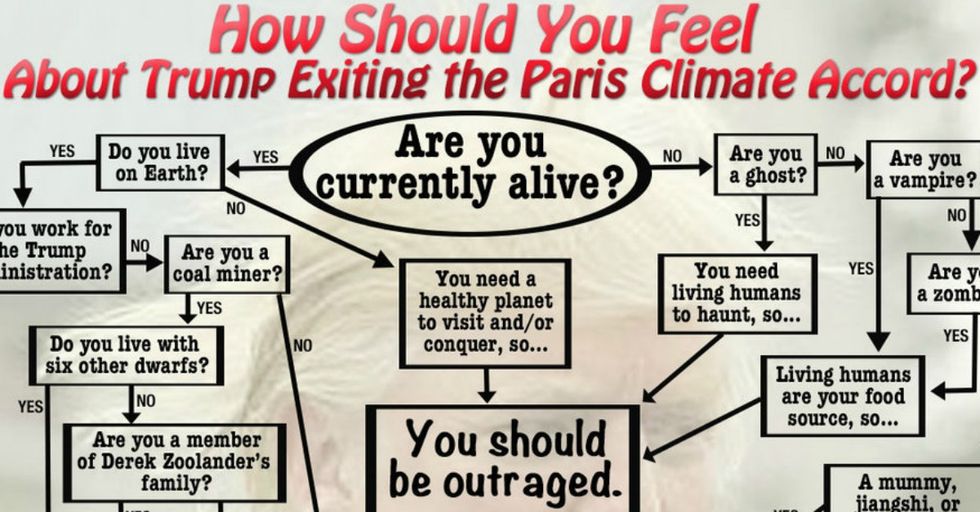 Should You Care About Climate Change? This Nifty Flowchart Will Tell You.

As Donald Trump pulls out of the Paris accord and Al Gore releases An Inconvenient Sequel, we as a people are confronting a dilemma. Ninety-seven percent of scientists and Al Gore are telling us that "climate-warming trends over the past century are extremely likely due to human activities," meanwhile, the leader of the U.S. is spreading inaccurate information about the Paris Agreement and crying about how the vast majority of nations pledging to help save planet Earth is unfair to the United States.

Quite a quandary. Luckily, comedian Josh Greenberg has provided us with a comprehensive flowchart that helps you decide whether or not you — yes, you — should be outraged by Trump's exit from the Paris Agreement. Whether you're alive or dead, a member of the Trump administration or a vampire (or both...), there's an answer for you.

Climate change deniers exist, but it's becoming increasingly difficult to defend the claim that our planet isn't heating up. Consensus: This is not fine.

The argument that remains is whether or not human activity is to blame for the rise in the Earth's temperature, and what we should do about it. The Paris Agreement seemed like a good first step. It said, "Hey, we nations of the world realize that we might be harming the very ground on which we live and the air that we breathe, and we realize we may not be around much longer if we don't try to do something about it." But Donald Trump, our president, wasn't having it, and he announced on June 1 that the United States would start the grueling, years-long process of pulling out of the Agreement.

Should you be mad about Trump's move? Is climate change worth getting all up in arms about? Josh Greenberg's hilarious flowchart has the answer.

Basically, unless you are a fictional character, you should be outraged about Trump's decision. Yes, even if you're dead.

So get angry, folks. And ghosts. And zombies. And "miscellaneous demon entities."

Climate change is real. It's here. Many cities and states around the country aren't giving up on the planet just because Donald Trump is. It's not too late to fight the good fight. Start by turning that light off. The one that you accidentally left on when you exited that room and have been too lazy to go flip off. How did I know? Simple. I know everything. Go on. It'll take two seconds. Then, if you can, donate. Planet Earth needs you.