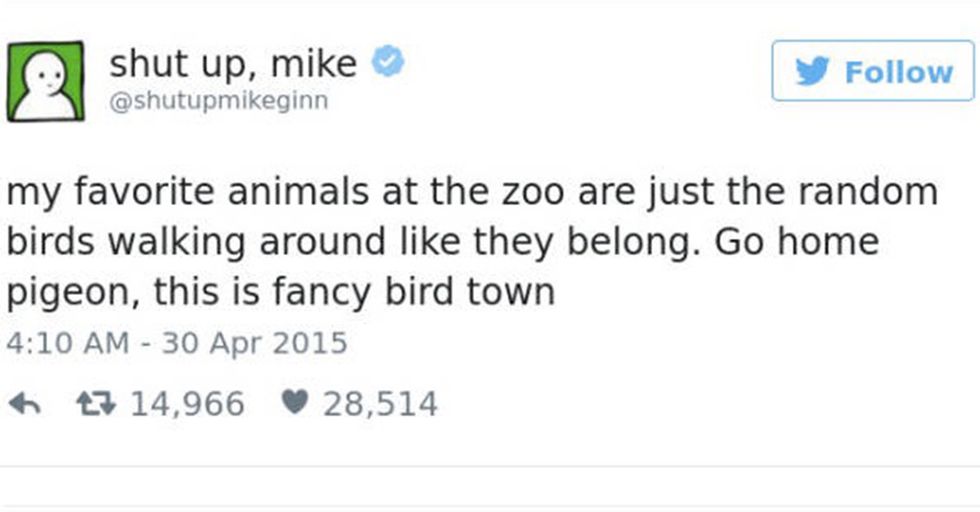 Twitter can be a pretty strange place. Without the photos and features of Facebook, and a 140-character word limit, it's often used as a dumping ground for all sorts of random thoughts.

Sometimes those thoughts are funny. Other times, they're flat-out weird. The prolific account "Shut Up, Mike" always manages to be both. We don't know who "Mike" is, but we get an up-close look at the workings of his weird mind thanks to his many hilarious tweets. It's pretty clear from the tweets below that if Mike gets a thought popping into his head, it's going to be funny...and he never seems to run out of ideas.

That is NOT fun.

They raised the bar too high.

Dress for the meal you want...

Finding beauty where others don't...

I agree with this sentiment. It's not always laziness.

You knew what that was, IE.

Life has a way of whittling down your expectations.

A strong sense of community there...

This would drive a person mad.

The pessimist of the bunch.

But who built it?

Turn the convention on its head.

Poor pup. It's doing its best!

Congrats on outlasting them.

That makes two of us.

Time makes fools of us all.

The world is chaos.

It's a new hobby!

Through trial and error, you'll find your sweet spot.

It makes you feel like you're doubling your value!