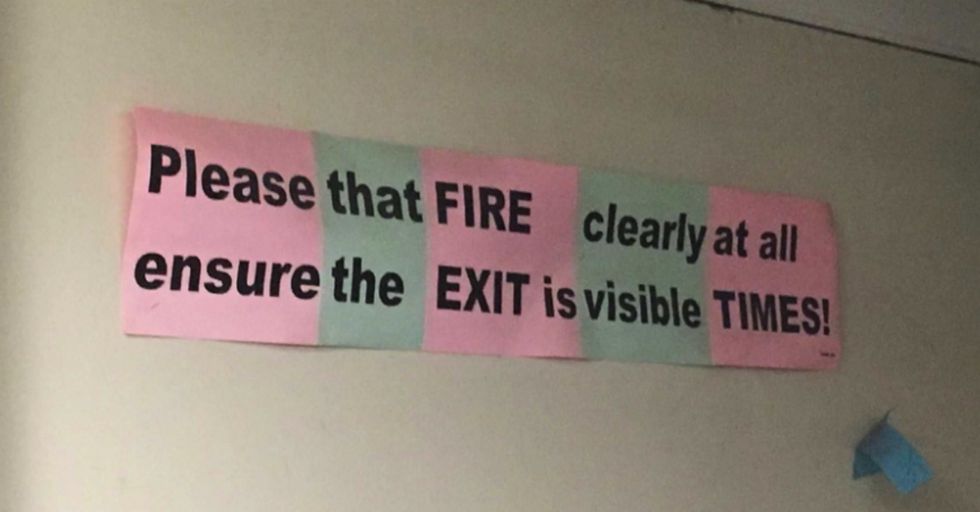 Language is an ever-evolving tool. Over the past few years, we've seen that the word "literally" can actually mean "figuratively," that something can be "a thing," and that some people "can't even" — all words and phrases that would make zero sense even 10 years ago.

That being said, we've collectively agreed on a few rules of the English language that probably shouldn't be messed with. I don't mean to sound like a grumpy old prescriptive grammarian or anything. I'm all about finding new words (and new ways to use them)!

That being said, I really think we should stick with the whole tradition of reading English from left to right and from top to bottom. It just makes sense. We've been doing it for so long that it seems silly to stop now, right?

Otherwise, it just gets too confusing.

Don't believe me? Well, then take a look at these signs. If you don't get a headache, you're doing much better than I am.

I'm not totally sure what this means, but I'm thinking we should probably honk, right? I do think my is truck!

I think this banner is having some sort of existential crisis. Where belong everybody? Where BELONG everybody?!

"All Love You Is Need All Is You Love Need"

So deep. So profound. So poetic.

"Do Not Under Stand Load"

Honestly, neither do I. I'm glad you said something first.

They don't own any property, but this is where you would enter if they did. Isn't that nice of them?

There's too much to unpack here.

Although to be honest, even after separating these into the way they're meant to be read, it still makes exactly zero sense.

If you need a job, you're gonna wanna find yourself some hiring people. If they're great? Even better.

"I've Better In Ash Some Butts An Tray" Mm. Indubitably.

You can't just switch up how you do the text between the top and bottom of the same image. What is the Prectimewiza?!

Quick, say the title of your favorite Stephen King book three times fast. IT, IT, IT!

Whatever you do, make sure the fire is pleased. I don't care what it takes.

I know what it's trying to say, but I still can't help but feel somewhat threatened. Is that what they were going for?

Gee, no way this could possibly be misinterpreted, right? Good thing it's not an important message or anything.

"There Will Definitely Be Blood Maybe"

Well?! Will there be blood or not? This affects my plans.

There's nothing quite so painful as an unfunny sign presented in a confusing fashion. Even if you could read it, you wouldn't laugh.

"You are than you seem"

Thank you. I think.

"Left No Turn Right Only Turn"

Left? No. Turn Right! Only Turn.

Attention! You are not our trollies! (Whew. I was worried for a sec there.)

There's so much going on here that I'm not even comfortable talking about, really. Let's just move on to the next one, shall we?

"Where Middle Students Are The School From?"

I have to assume this bulletin board was created by space aliens who haven't quite figured out how to communicate with humans.

I give up on this one.

I've been staring at this for the past 15 minutes and I feel like it's only gotten more confusing. Please send help.

Did know order any you words put just you can in? True! It's

I'm not sure what beef beans are, but you've sold me, Hormel. I will buy your product.

"Please Do Not Take It Home Leave Litter Here"

Aw, isn't that nice? A designated place to put all your litter!

OK, I'm gonna save you some trouble with this one. I think it's supposed to say "Of course, after the bad ones, good days will surely come." But it doesn't. It doesn't say that even a little bit and I hate this whole thing with my whole heart.

"Does my come from?"

Ah, of course. "Where does my electricity come from?" All you have to do is read from bottom to top, to right, to bottom, back up to the top, and to the right. Just like we were taught in school.

Beer corn sounds like it'd probably be delicious. Pong hole? I'll take a rain check. Share this with someone who could use a laugh today!