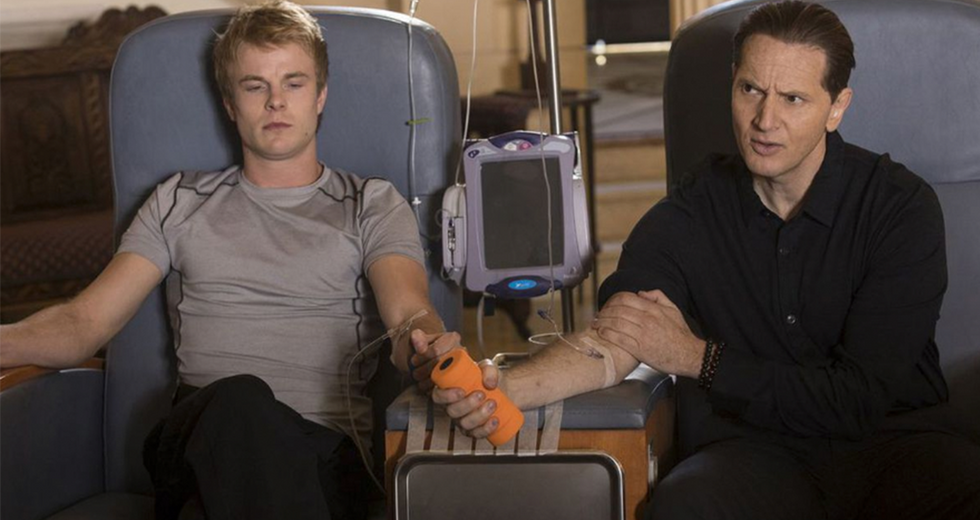 Death is a natural process that everyone must experience at some point, right? Right.

Yep. You read that correctly. Rich people are literally paying money in order to escape death. Or, anyway, they're trying to do that. And if you ask me, their methods are more than a little questionable.

There have always been those who wish to delay or skip it altogether. Since no one knows exactly what happens after you die, it's perfectly natural to be a little put off by the whole idea of completely ceasing to exist.

Thanks to a startup company in California, you can now do away with pesky aging completely! All you need is a lot of money and a little bit of blood from a teenager. (Yep. You read that correctly, too.) But don't start siphoning off that lifeblood just yet! The FDA just released a warning about the practice that you'll definitely want to read before you begin your Blood Boy journey.

This just in: Rich people can be pretty eccentric.

As humans age, their bodies become weaker and their brains process things much more slowly. It's a totally natural thing that happens to everyone. Unless you have enough money to put an end to it, apparently. Some rich people have chosen to invest in different ways of keeping their bodies younger for longer.

Basically, they want to be as strong and powerful as Arnold, here.

Even if they happen to be much older than the Governator. The idea of being young and strong forever sounds pretty great, but there's a catch. Of course, there's a catch. There's always a catch! So, how are these older people expecting to live forever?

And not just any blood. The blood of young people. Because it's better.

If you want to loosen your definition of the term "vampire," then yes. These people are vampires. Youth vampires. Here's how the whole process goes down:

Step One: Young people give their blood to the cause.

On the bright side, nobody's getting their blood sucked out from the neck. It's all very professional and medical. Also, these young people are paid for giving up their lifeblood. So if you're young and you have blood, this might be a good moneymaking opportunity for you!

Step Two: Older people get the blood put into their own veins.

Apparently, the new, young blood is supposed to slow down the aging process and allow the older person to feel and act younger than they actually are.

If you're a fan of Silicon Valley, this might all have started to sound familiar.

In one episode of the show, Gavin Belson gets some blood from a "transfusion associate" named Bryce. If you watched the episode, you probably dismissed the transfusion as one of those bizarre things that only exist in a fictional TV show. If only that were true.

The startup company Ambrosia made the whole process possible for real people.

Back in 2016, Ambrosia started looking for older volunteers to inject young blood into their bodies so they could study the results.

The company actually received quite a bit of flak for this study, as it wasn't exactly scientifically sound. For instance, there was no control group, and the "older volunteers" didn't actually have to be that old — people as young as 35 could participate.

Also, the volunteers had to shell out a chunk of change for the "privilege" of being injected with young blood — about $8,000 each.

Remember what we said earlier about rich people being eccentric? Yeah, well, 100 of them willingly signed on for this bizarre study. At this point, you're probably wondering if there's even any scientific basis for the theory that young blood can slow the aging process.

The answer is yes...kind of.

OK, so here's the thing. There have been studies that show that injecting plasma from a younger mouse into an older mouse results does, in fact, rejuvenate the older mouse's brain.

But that's in mice.

Obviously, it's quite the leap to assume that everything that happens in mice would also happen in humans. Not only that, but there are plenty of non-transfusion activities you can do to "rejuvenate your brain." Like eat healthier and exercise.

Plenty of people receive blood transfusions every day, but they're not trying to become younger — they're just trying to stay alive. Imagine shelling out your hard-earned money and being hooked to an IV on the off chance that it might make you feel younger?

Now. If for some strange reason you are still interested in the Young Blood Treatment, there's something you should probably know.

As it turns out, when you make claims about being able to reverse or halt the aging process, the Food and Drug Administration sometimes gets involved. That's exactly what happened this week. And folks, the news wasn't good.

The FDA is now officially discouraging people from participating in "young blood" procedures.

As Dr. Scott Gottlieb (commissioner for the FDA) points out, there is no compelling evidence showing that plasma transfusions from young people have any benefit to older people.

They went from fully operational in five different cities, to becoming the subject of a warning from the FDA. That's not really something you come back from.

Ambrosia has announced that it is no longer performing the Young Blood Treatment as a result of the warning from the FDA. Well, this is awkward.

If you're disappointed by the news, maybe take what Nancy Carignan has to say:

@ArmstrongDrew Courage is required to grow old gracefully. Courage and a great sense of humor. These people have neither.
— Nancy Carignan (@Nancy Carignan)1550680177.0

Wanting to "cheat death" is understandable, but it's not really how the world works. Sure, maybe scientists will figure out how to do it someday, but for now, growing old gracefully is a pretty good goal to have.

It's not like most of us could have afforded the young blood, anyway.

Maybe this whole FDA warning thing is actually a blessing in disguise. At the very least, it's a good excuse to save your pennies. And maybe just start a retirement fund instead. Share this with someone who would totally consider using a Blood Boy!