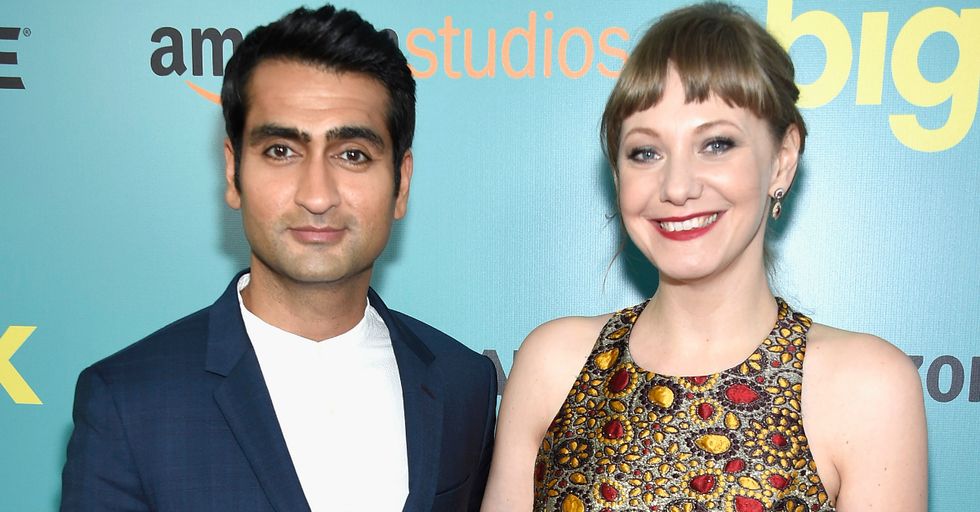 If you haven't seen The Big Sick, then you're missing out on one of the the best movies of 2017. Seriously - get thee to a streaming service and watch that movie ASAP. It's sweet and moving and hilarious and everything we need in movies right now, quite honestly.

Perhaps the most unique part about the film is that it's based off of Kumail Nanjiani and Emily V. Gordon's life. The married couple wrote the film together, and Nanjiani stars in it as himself. To say it hits close to home would be an understatement. It is their home.

It's a biographical romantic comedy written by Emily V. Gordon and Kumail Nanjiani. It chronicles their relationship from meeting each other, to breaking up, to dealing with Gordon's sickness as well as the cultural differences between the two.

Around mid-morning on Wednesday, The Washington Post tweeted out an article with the headline, "Kumail Nanjiani opens up about his wife’s illness, the inspiration for 'The Big Sick'."

The article covers a recent Twitter thread the comedian wrote upon finding the real-life hospital badge he had when he visited Gordon. "Looking at it, I got pulled right back into that moment," he said on Twitter. “And the strongest feeling I felt was this kind of fearful floating. Emily’s condition & disease at that point felt so big & unknowable."

Pretty quickly, Nanjiani responded to The Washington Post's tweet, taking issue with the phrasing of the headline.

He pointed out that they wrote the film together, and asked that the publication include Gordon's name in the headline. They only referred to her as his "wife" and as providing "inspiration" for the film.

Other Twitter users also tweeted at the publication with their issues regarding the headline.

One user questioned what was wrong with the writers, and others joked about how Twitter desperately needs an edit function. One wrote, "Seriously? You really need to acknowledge her by name! Emily Gordon, Co-Writer! Women are not just 'muses'. Give your heads a shake!"

People were NOT happy.

And when people aren't happy on the internet, they tweet. There were tons of responses on the social media platform. You can probably guess that The Washington Post caught wind to what was going on...

Which is why they responded directly to Nanjiani.

"You're right," they wrote. "We've changed the headline." Claps and finger snaps all around, please.

And just in case anyone wasn't aware, they issued a second tweet further clarifying that the headline to the corresponding article was updated.

The new headline reads, "Kumail Nanjiani opens up about his wife Emily V. Gordon’s illness, which inspired them to write 'The Big Sick'." Yep, that one works much better.

Nanjiani responded, retweeting the headline change and adding the caption, "Thank you. You rock. Continue your awesome work. We need it."

Watching the exchange on Twitter has given us hope that not everything that happens on social media is overwhelmingly bad. In fact, a lot of good happens and we're thankful for it.

Nanjiani is great. Gordon is great. The Washington Post is great.

It also provides a pretty nice layout for how to call out something effectively and actually see change happen. Can we use this strategy in everything going forward? Yes, please.