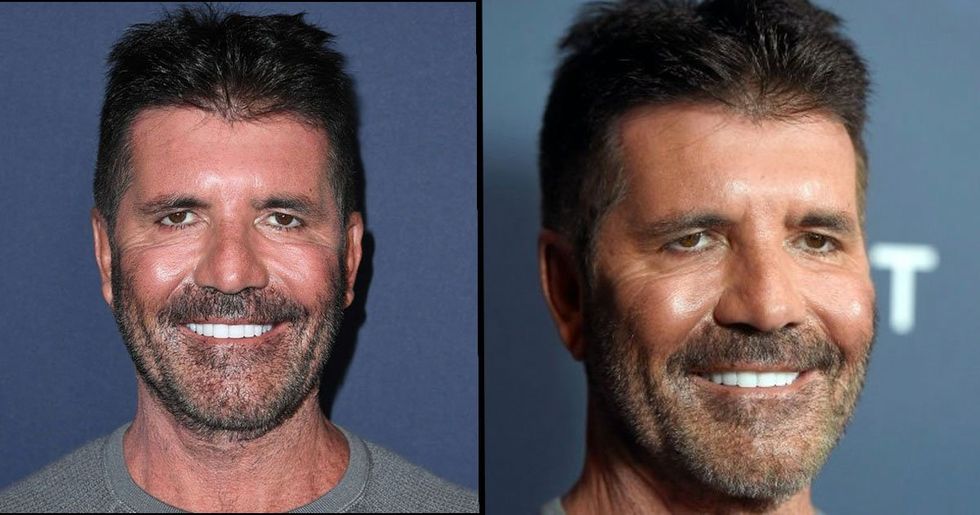 And now, Simon has finally spoken out about his botched face and has finally revealed what actually happened to make him look so drastically different.

But, despite the high-quality memes born from Simon's bizarre face...

We want answers. What the heck happened?!

He has tried blaming his vegan diet for his dramatic new look...

But I, for one, refuse to believe that exercise and lots of vegetables did this to him. Simon famously transitioned to his vegan diet a couple of years ago after a health scare and regularly promotes the green lifestyle.

It's a far cry from his old life.

The fifty-nine-year-old was forced to make changes to his lifestyle after falling down the stairs in the middle of the night in October 2017. He was rushed to the hospital and told that he had to stop binging on sausage rolls, hamburgers, and his favorite sweet treats made for him by his personal chefs.

And, now, he has finally admitted to the real cause of his drastic new face...

And, believe it or not, his new appearance isn't a result of his vegan diet. Shocking!

He admitted to having a facelift.

And he has finally admitted to using "too much botox."

You don't say! Simon has now said that he and his Britain's Got Talent co-judge, Amanda Holden, may have gone too far during the so-called "Botox Years."

He has said that he and Amanda went a little overboard with the botox.

The music mogul also told The Mirror that he's been left in hysterics by old clips of him and Amanda, forty-nine, sporting their significantly smoother complexions.

And he's admitted to finding amusement out of his old looks.

Speaking ahead of the latest semi-final for Britain's Got Talent: The Champions, Simon said: "I love watching 'the Botox years.''' All of us are like, '"Christ, we had a lot that year. Not so much that year… maybe a bit too much that year.'"

Simon has always been a big fan of Botox.

Evidently. And he has been open about using Botox in the past, even reportedly gifting his co-stars £350 vouchers for the treatment. What a great friend...

"You know, the old clips of us are hysterical, Amanda's always like, 'What was I thinking?', I said, 'Well, I don't look a lot better.' I look all right now, but certain years it was like, 'Wow, I don't know what was going on.'" Let's just hope that he won't be getting more, I don't think that his face could physically hold it...