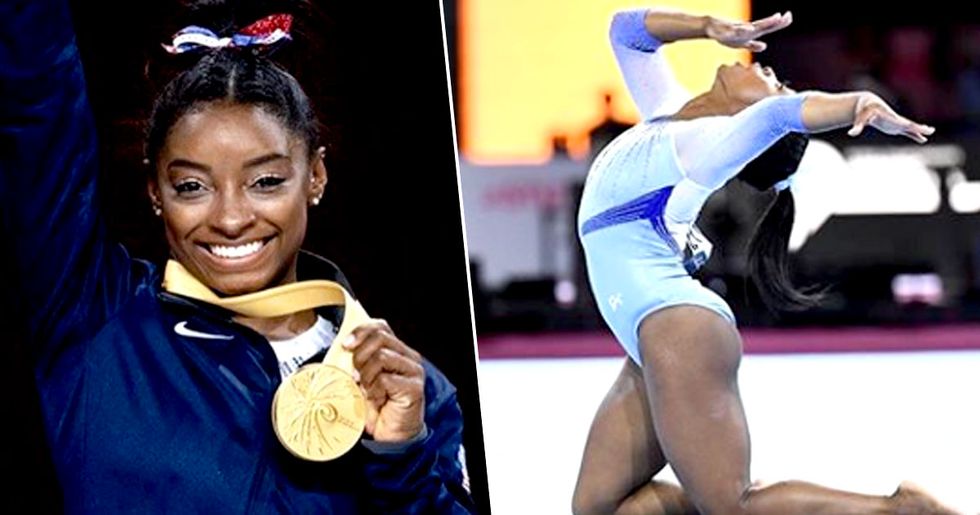 You may or may not have heard, but Texan gymnast, Simone Biles, continues to make history.

For as long as I can remember she's been smashing records and making new ones. A while back she became the first-ever gymnast to attempt, and successfully land, a double-double dismount from a high-beam. Then she became the first woman to ever land a triple-double in competition during her floor routine. All in the same week.

And now, she's done it again. She's made history by winning 25 gold medals SO FAR to become the most decorated gymnast of all time.

And then, the gymnast returned to our headlines.

Commenting on her incredible victory, Simone said: "It wasn't as good as in training. I'm just happy that I landed it because I feel like after night one my confidence got shot down. So I was really worried about it going into today, that's all I could worry about. So I was really happy."

And others felt that an apology was in order.

We are not worthy!

And it doesn't stop there for Biles.

Today Biles became the most decorated gymnast in history, after smashing the record and achieving 25 gold medals - ALREADY!

I know we've said this already. But for God sake! SHE'S 22. And is ALREADY the most decorated gymnast in world history. OMG. I'm also 22. The hardest decision I made today was whether or not I should order KFC. The hardest task I partook in today was eating said KFC. Where's my gold medals?

When she won her 21st medal earlier today, Biles overtook Russia's Svetlana Khorkina for the women's record. She then overtook Vitaly Scherbo - who's held the record for almost 30 years - to become the world's overall most decorated - including both male and female gymnasts.

She's likely to break her own record every time she's out this week.

Biles is looking likely to break records almost every time she is in action this week but the 22-year-old still feels the pressure on the world stage. Speaking to the Olympic Channel, Biles said:

Sometimes, I wish I would quit because the other day we walked out there, and I was like, ''I literally hate this feeling. I don't know why I keep forcing myself to do it." But you know, we love the thrill of it. It reminds me to never give up because, one day, I won't have the opportunity to get that feeling.

And we're feeling very confident for the 2020 Olympics...

If Biles has anything to do with it, America is going to be bringing home that gold.