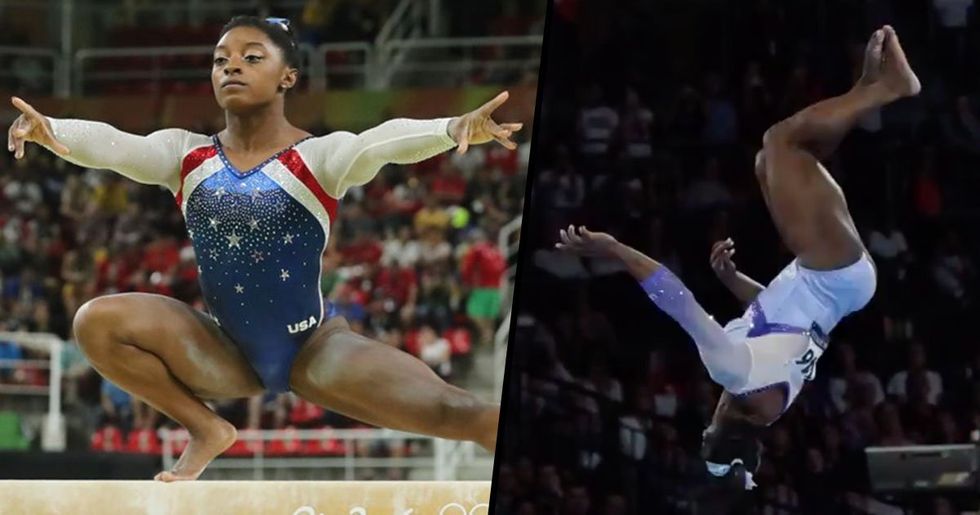 You may or may not have heard, but Texan gymnast, Simone Biles, made history this year when she became the first-ever gymnast to attempt, and successfully land, a double-double dismount from a high-beam. Oh, and she also became the first woman to ever land a triple-double in competition during her floor routine. All in one week.

And since that footage emerged online, which shows one of her routines in super-slow motion we've been left completely shocked. Thankfully, the world of gymnastics realizes just how incredible Biles is and has decided to honor her by naming more than just one skill after her. Wow.

Keep scrolling to see the all-star in action.

And, the gymnast returned to our headlines during the 2019 Gymnastic Championships...

The very next day, Biles went on to become the first woman to perfect the triple-twist, double-flip move in her first pass on floor. Wow.

According to Team USA, the rule stated, if Simone replicates the double-double dismount from the balance beam at the international meet in October, the move will be named after her.

Commenting on her incredible victory over that weekend, Simone said: "It wasn't as good as in training. I'm just happy that I landed it because I feel like after night one my confidence got shot down. So I was really worried about it going into today, that's all I could worry about. So I was really happy."

And now that we've finally hit October, it's show-time!

Team USA competed in Stuttgart, Germany at the Artistic Gymnastics World Championships 2019. The competition is home to some great talents, showcasing the best of what gymnastics has to offer. And for Simone, it's a very important moment in her career to leave her mark on the sport forever.

And, of course, there was only one star of the show...

Obviously, it was Simone. The sports superstar made history (again!) on the second day of the competition during the qualification round when she had two skills named after her.

What an absolute honor.

The star managed to pull through. Firstly, she was awarded "The Biles" on the beam, alluding to her signature "double-double" dismount. No one will ever refer to it as the "double-double" ever again. Thank God. I think we were lacking in creativity when that one was initially named anyway.

And then we have "The Biles II."

In terms of her floor routine, the "triple-double," again, not very creative, will now be referred to as "The Biles II" because she already has another floor skill named after her as well as one in the vault too. God, what a talent!

She said this right before it was time to showcase her talents.

"...I feel like I still wanted to go out there and get it named after me, for myself. And then we'll see what happens." And she managed to pull through for herself, if not anyone else.

She showed everyone who's boss...

The twenty-two-year-old managed to qualify first in every single final during the Stuttgart games. We didn't expect anything less if we're being honest.

With six days left, we're ready to see how these games pan out...

But one thing remains true, and that's the fact that Team USA is looking powerful and dominant over its competitors. That can only be a good thing as Tokyo looms over.

We are feeling very confident for the 2020 Olympics...

If Biles has anything to do with it, America is going to bringing home that gold, I can assure you. Though she isn't the only gymnast who has made headlines of late. Katelyn Ohashi, from UCLA, caught the world's attention earlier this year with her stunning routine, which some have argued gives Biles a run for her money. Keep scrolling to see, and to decide for yourself, who the real champion is.