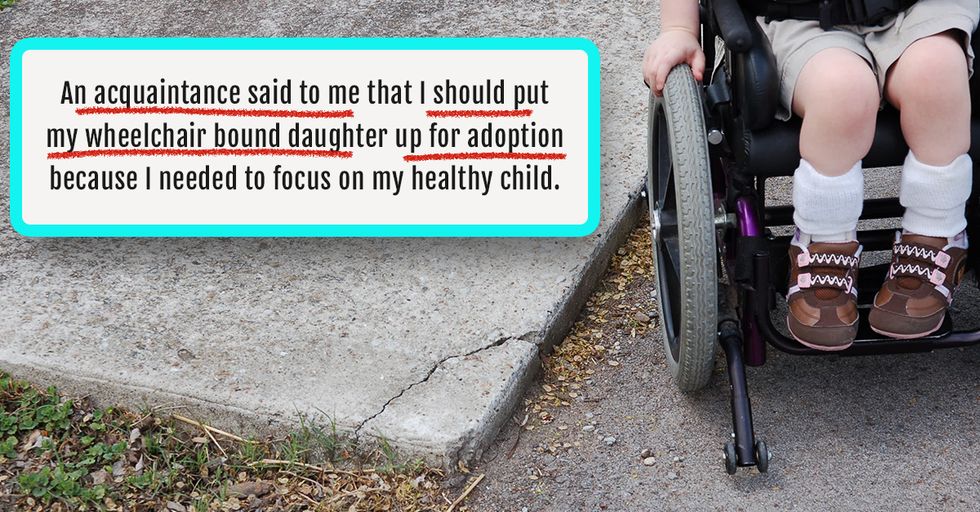 We all know someone who just can't help but put their foot in their mouth. A talkative aunt, a nosy coworker, an annoying acquaintance you can't just help but wish would go away. Usually, their comments are cringeworthy but bearable.

Then, of course, there are the outliers – the comments so grossly offensive, they made everyone hate that person immediately.

Here are a few of the choicest ones.

We don't even know how to start with this comment, it's so outrageously offensive. First of all, what kind of person devalues an entire human's life just because they're disabled?
Secondly, what kind of monstrous psychopath suggests to a parent that they give up their own child for adoption? We literally can't understand this.

Really? Is a bagel really that serious?
And the worst thing is, she didn't even back down, she just changed direction. Who knew bagels could be so incendiary?

Okay, we've heard about horrible bosses, but this one takes the cake – "it's not our fault that she was born with a cleft lip?"
Seriously? We can't even.

4. Come back to work

Why are some bosses so callous? No, seriously – why?
What kind of human being is so lacking in empathy that they don't understand how horrifying it must be to know a parent is in such a vulnerable state?

This right here is the type of thinking that puts people's lives in danger. Don't believe in mental illness? It literally affects millions upon millions of Americans a year.
This is basically the same thing as saying I don't believe in car accidents or the war in Iraq. Just because you don't witness it doesn't mean it's not happening.

So kids are the only important family relationships a person has to honor? What kind of twisted idea is that?
Agains, this boils down to simple empathy. This Director has none.

Pyramid schemes are the worst... and they're even more painful when they come at you courtesy an old acquaintance.
Here you are thinking they want to catch up, but no, they want to sell you "youniqe" makeup. What the heck is youniqe makeup anyway?

Ooof, this is a painful one. The kind of callousness and evil in this one sentence is just so traumatizing, we feel it in our gut.
And from his own father? He was right to cut that monster off...

This person is a psychopath. No, really. One of the trademarks of psychopathy is callousness and a lack of regard for life.
This person stated they'd like to kill a cat, and then proceeded to do just that. Dear commenter, the next time you see this person coming – run.

After reading this comment, we understand, in part, why the husband is abusive – because he has an enabler for a mother.
What type of person blames a victim of abuse for their abuse? It's literally beyond the pale. Who is this woman? Why is she so hateful? These are all serious questions...

What sort of godawful piece of human scum is this? Serious question.
We don't even know how to approach this, there are so many levels of wrong here. So many. We need a hot bath to wash just the memory of this off.

How does that even make sense? How does being gay mean a person wants to "kill and destroy humanity?" We're literally at a loss here. Also, this person is an idiot of epic proportions.

Ooof, this is painful. But also a humungous good thing. Why, because this person's ex is a psychopath.
They not only admit they cheated, they casually admit that they did so "countless times." Not once, not twice, but COUNTLESS times. You dodged a bullet there, buddy.

Where do we even begin? We have to gather our thoughts for a moment here.
Okay, assuming this kid is 16 or below, we blame the parents, because how does your child swan through life with such aggressively entitled ignorance? Also, this is kid the worst.

Oh, my god, the rage we're feeling right is now just – whoo!!!! What kind of festering garbage dump of a human being says such a gross thing to another?
Does this child even understand the word "empathy?" Is this child even human? We can't. We just can't.

Here's a prediction – in 12 years, this guy will be arrested for insider trading or malpractice or lying to the feds, but he'll get off because his cousin's cousin bribed the judge.
Even then, everyone will know he's a crook, and they'll judge him for it and hate him silently because he's that slimy guy and will always be that slimy guy. Douche.

But you're not in high school anymore, are you? Douche.
We can't help but wonder what this particular person is up to these days, because we know the glory days they're reminiscing about are long gone, and they're sad, disgruntled shells of their former selves.

Good for you, girl, good for you. This person, whoever he is, did not deserve a single other moment of your time. In fact, imagine what it would be like if you had completed your date, and become *gasp* significant others.
Anytime you ate, he would have made snide comments like "are you sure you want to eat that?" and then he would have eventually started saying things like "you were so much thinner when I met you," even though you're actually the same weight.

"Poor people are only poor because they want to be." We have to sit with this one for a moment because we're flabbergasted here.
Other than priests, monks and nuns, who would choose to be poor? No, seriously, who would look up one day and say – "gee, you know what I really want to be? Poor." This person needs to take a flying leap.

We're just gonna hazard a guess that this woman is the same type that pinches your arm and says, "Whoa, getting a little fat there, aren't you?" The whole family can kick rocks.

We've all experienced these types of people in our lives, the naysayers, the ones that put you down. They're the worst, and they're usually operating from a place of jealousy.
They tell you all the things you can't do because they can't do them, and don't want you to show them up in the process.

This person has the right attitude, because this girl, whoever she is, has fumes of toxic insecurity just rolling off her.
Anyone who says something like this probably doesn't like themselves and thinks you won't either, so they're putting up a brash front to fool themselves and you. Walk away from this person and never look back.

23. The literal worst thing ever

Whoever this person is, we hurt for them, we truly do. What kind of person would say such a horrible thing to anyone, much less their own child.
We hope that this person gets all the counseling and support that they need, and usually we would say that we hope this mother burns in the deepest, hottest pits of hell, but we can't help but question what turned them into this cold, evil person.