Here's How a Simple Stray Hair Can Accidentally Kill Your Infant, and How to Stay Vigilant | 22 Words 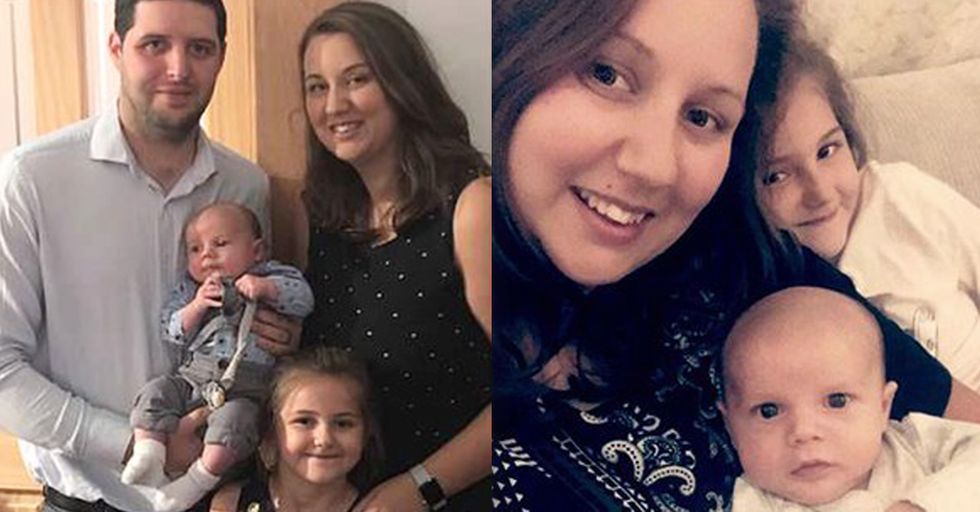 Here's How a Simple Stray Hair Can Accidentally Kill Your Infant, and How to Stay Vigilant

While becoming a parent can be a dream for many, there's also a ton of stress that goes along with it. After all, you're responsible for someone's life. Just the thought of that gives me anxiety, which is probably why I'm not a parent yet.

There are so many things to think about when you have a baby. Are they hungry? What does that cry mean? Are they cold? Why aren't they sleeping? When can I sleep?

And not to stir up any crazy fears in anyone, but there are certain things that are super dangerous for babies that never even cross our mind. Like a stray hair accidentally killing your infant.

Yes, this is a real thing that can happen. But by staying aware and vigilante, it can be easily avoided. Here's how it almost happened for one mother.

The circulation was cut off for at least 12 hours, and baby Ezra almost lost four of his toes. Ezra had to go to the hospital because of the severity of the situation.

You would never think that a strand of hair could cause danger to a baby.

It would seem like a piece of hair wouldn't harm a child, but that's not the case at all; it could be extremely harmful.

Baby Ezra woke up his mother with his crying, but he wouldn't drink any milk.

That was the first clue that something was seriously wrong. But there was something else that Upton noticed.

She noticed that four of Ezra's toes were super red and swollen.

That would cause any parent to become stressed. This incident is particularly scary because the baby couldn't communicate what's bothering him.

Upon closer inspection, Upton realized the cause of her son's swollen toes.

The young mother saw that a strand of her own hair had wrapped itself around Ezra's toes, causing the circulation to be completely cut off. The baby had absolutely no circulation in four of his toes.

The discovery was disturbing.

“It must have been on there for 12 to 14 hours because I only noticed it in the morning," Upton explained. “I pulled at it and realized how tightly it’d wrapped around his toes. It tangled around three or four of them. I felt awful."

Removing the hair from the toes proved to be a difficult task.

With the aid of some tweezers, Upton spent about 15 minutes trying to cut the strand of hair from Ezra's poor toes. Finally, she was able to free them.

Upton took Ezra to the hospital after she freed his swollen toes.

There, a doctor gave Upton some antibacterial cream to treat the injured toes. The poor kid!

She explained how she was terrified that Ezra would've lost his toes if she hadn't found the hair in time. Talk about the stress of being a parent!

She also said that Ezra is back to his normal self, thank goodness. What an ordeal for such a young fellow!

Upton also had advice for parents of young children.

Upton advised that it's always good to check for hair whenever you're changing your baby, putting on their socks or removing them for the bath. After all, it's quite easy to miss something as small as a stray hair.

If a stray hair wraps around a baby's toe or finger, it can act as a sort of "hair tourniquet."

Which is as disturbing as it sounds. “Hair easily gets stuck in things when they’ve been in the washing machine too, so it’s important to check," Upton also advised.

Believe it or not, there are quite a few things that can put your baby at risk.

For instance, back in 2011, it was reported that "crib bumpers" could be dangerous for your baby. There were cases where the bumper had caused a child to die from suffocation or strangulation.

As if being a parent wasn't stressful enough!

But it's super important to be knowledgeable about these things, even if it's anxiety-inducing. According to pediatricians, here are a few other things to watch out for and avoid.

Allowing your baby to fall asleep in a swing.

Even though waking up a sleeping baby can seem like the ultimate danger, it's worse to let them snooze away when in a swing. Having a baby sleep in a sitting position is dangerous.

If they're sitting up too long and sleeping, they are at risk of not getting enough oxygen.

The same is true for car seats. If your baby falls asleep in the car seat, that's fine, but when you arrive home, take them out and put them in the crib.

Basically, don't carry the car seat inside and continue to allow your child to snooze away in a seated position.

"Staying in a sitting position might make it hard for your baby to breathe, plus it might contribute to a flat spot on the back of your baby's head and worsen reflux." Being a parent is not for the faint of heart, that's for sure.

Speaking of car seats, don't rush your baby to a bigger one too early.

CPSaftey has guidelines on how you move your child up car seat sizes.

There are also products that you should avoid having around your baby.

I know, it seems as if the stress of parenting never ends. I feel like it just comes with the job.

Pediatricians apparently think walkers should be banned, so why are we still using them? Sure, they give your kid independence, but they also make them susceptible to major injuries and reaching dangerous things.

Well here's the good news: they aren't legal anymore! The side can drop unexpectedly, and a baby can just roll right out of the crib. It used to be the wild wild west back then.

Don't use a bath seat for your baby.

Bath seats can make parents feel as if they can leave their child unattended in a bath. Some infant deaths have even occurred when the seat has tipped over in the tub.

Even though they may seem like they're helpful, these baby sleep aids can cause suffocation if a baby rolls over.

They have a fun name, sure, but these things are dangerous. It's the same with a bath seat - if left alone, the baby can tip over and get seriously hurt.

They look like a ton of fun, but if they snap and break a baby can get really hurt. Better to be safe than hurt!

Car seat toys that don't come with the car seat.

When toys come with a car seat, they've been tested to make sure they're safe in the event of an automobile accident. There's no way to tell if other toys are safe if they haven't come with the car seat.

It may seem comforting to sleep in the same bed as your baby, but it can be very dangerous. A parent can roll over and suffocate their child.

When using a baby sling, it's extremely important to make sure your baby is properly secure. Babies have fallen out of slings and fractured their heads. It's important to find one that measures up to safety standards.

You would think a crib tent would be ideal since it prevents children from crawling out of their cribs. However, babies can get caught in the fabric, and sometimes the tents have collapsed onto the baby.

Now, that you're fully stressed out, take a deep breath.

This list isn't meant to scare you, especially if you're a new parent, but instead to keep you informed! Share this with a friend who slept in a drop-side crib as a baby.