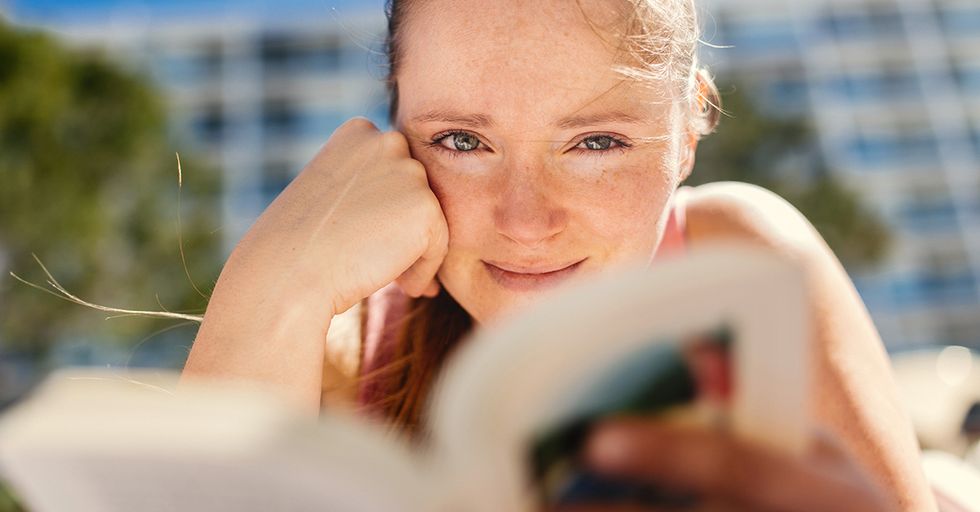 Endorphins are the human brain's au naturel drug of choice.

Our bodies release these feel-good neurochemicals when faced with high levels of stress, fear, or pain.

Once released, endorphins then attach themselves to specific receptors in your brain, creating a chemical response that diminishes your perception of pain and increases your overall sense of well-being.

When it comes to endorphins, there's usually a catch; no pain, no gain.

Hence, why exercise often leads one to experience a sense of euphoria, AKA the "runner's high." And while, sure, we all want to be healthy and feel good, some of us will just never be pumped about exercising.
And that's okay. But if you want your brain to reward you with feelings of happiness, you've got to prove to your body that you've earned it. OR, at least, make your body think you have. Here's where we come in.

We're here to help you manipulate your own brain into believing that you deserve to be happy.

Since the discovery of endorphins a mere 40 years ago, we've learned a few ways to persuade our own brains into hooking us up with a quick fix of happy. Here are 18 simple, natural, easy ways to get those endorphins flowing freely and instantly feel happier.

They always say "laughter is the best medicine," and apparently, 'they' are onto something as modern science tends to agree. Apparently, laughter is such a powerful antidote that even the expectation of laughter can cause one's body to increase endorphin production. Research conducted by Lee Berk with Stanley A. Tan of the Oak Crest Health Research Institute revealed that the anticipation of “mirthful laughter" causes two separate hormones to be released: beta-endorphins which are known to decrease depression, and human growth hormone which increases immunity.  So when you're waiting for your co-worker to drop that terrible punchline to the inevitably inappropriate joke their sharing with you, don't be so annoyed. Even the slightest possibility that it may end up being funny is enough to make you feel a little better about life in general. P.S. I'd like to credit this study for inspiring my latest endeavor; bringing the word "mirthful" back into colloquial circulation.

Everyone knows that excessive sun exposure can lead to skin cancer, wrinkles, melasma, and premature aging. But the sun really gets a bad rap these days. Not only does your body needs a sufficient amount of vitamin D, AKA the sunshine vitamin, to properly regulate your mood, new studies show that ultraviolet radiation from the sun causes your brain to release beta-endorphins, which result in feelings of euphoria. So while you should keep wearing your sunscreen, you also shouldn't be afraid of the sun's rays. As with all good things, moderation is key.

While we doubt this one comes as a surprise, it's still worth mentioning that spicing up your love life doesn't just burn extra calories and give you that extra dose of 'exercise endorphins.' Endorphins and oxytocin are released during sex, creating feelings of intimacy and relaxation leading to improved sleep, decreased physical pain, and an increase in immunity. So next time your husband tries to get frisky when you have a headache, take him up on the offer! You may just feel better afterward!

It's the reason why nurses immediately place newborn babies on their mothers' bare chests. Skin-to-skin contact is proven to be an extremely effective way of releasing oxytocin in the brain, AKA "the bonding hormone." Holding hands, hugging, or even getting a massage decreases cortisol levels, reduces stress and has even been shown to lower blood pressure and heart rates, according to research done at the University of North Carolina.

Rainy day? No lover? No jokes? No worries. And no, you don't need a treadmill either. Just bust out those dusty photo albums and take a stroll down memory lane. After engaging in a little nostalgia, you'll find yourself flooded with serotonin and feel better in no time at all. But be careful, this one is a double-edged sword. Be sure to look at photos of happy memories, as the not-so-happy memories will leave you feeling, well, not-so-happy.

While listening to music is an effective way to boost endorphin production, making music is an even more effective method of increasing endorphins. So turn things up a notch and belt out a ballad or bang on a bongo! You'll be feeling better before you know it.

Spicy foods sort of make your body freak out for a moment. Your brain responds to the heat in the same way it responds to pain. Cue instant release of endorphins. Enter happy feelings. Recover. And onto the next bite. And you don't need to be a hero to be happy- have some water handy.

Just like sunshine, moderation is key when happy hour hits. According to a 2012 Science Translational Medicine study, partaking in an alcoholic beverage or two causes your brain to release endorphins in the specific areas of your brain responsible for inciting pleasure. While the fact that alcohol intake leads to pleasure is no news-flash, at least now you can scientifically defend your evening cocktail[s].

Duh. This one's a no-brainer. Chocolate cake is the only universally accepted prescription for a broken heart. Rocky Road revenge and tiramisu tears are the only way to survive a break-up. But chocolate shouldn't be exclusively reserved for times of heartache. Nope. According to studies, cocoa contains certain mood-enhancing substances like phenethylamine (which gives your body an endorphin boost) and theobromine (which suppresses pain and increases pleasure). Not too thrilled about your outfit today? Grab that chocolate doughnut in the breakroom. You'll be feeling fashionable again in no time.

It may feel counterintuitive to willingly insert dozens of tiny needles into your body... but according to Uncle Science, it works. Not only does acupuncture work, it works well. You may have never heard of enkephalins, beta-endorphins, endo-morphins, and dynorphins, but if you've ever felt utterly relaxed, you can thank them for that stress-free feeling. Acupuncture releases of all four of these magical mood-boosting chemicals in your brain at the same time. Personally, I've practically floated out to my car after leaving acupuncture appointments in the past.

A 1995 study compared the neurochemical releases in two different groups of people. 11 elite runners and 12 highly trained meditators and the results revealed something shocking. The meditators experienced a higher increase of endorphins than the runners. Simple practices like meditation can be surprisingly difficult for our hyperactive, stressed-out minds to engage in. We tend to often feel as if we're wasting valuable time when we aren't thinking about all the things we need and want to do in our daily lives. But it's true that we get far less done when we obsess and worry about these things. In reality, when we calm our minds, we can stop thinking so much and start actually doing things!

It may feel silly to look in the mirror and give yourself a good pep-talk, but affirmations are actually a powerful method of re-wiring our brains to think about our lives in a more positive, productive way. By repeating affirmations, you actually change the neural pathways that lead to repetitive negative thoughts and thus open up new pathways leading toward positive thinking.

The smell of vanilla and lavender have been proven to increase the production of endorphins. Spray some lavender mist on your pillow at night or throw an essential oil roller in your purse and you'll be all set next time you're sitting in traffic.

Eggs contain tyrosine and tryptophan, B vitamins and vitamin D- all of which contribute endorphin productions. Who knew scrambling some eggs could de-scramble your mind?

Brazil nuts and sunflower seeds are the richest sources of selenium available and are known to have positive mood-affecting properties. Next time you feel as if you're verging on a nervous breakdown, go nuts. Not like flip-out nuts- but like Brazil nuts. You get it.

Avocados are a source of choline, known to boost both serotonin and dopamine. Not to mention, the N-Acetyl-Cysteine and B5 found in eggs will leave you feeling energized and focused!

Bananas are good for more than just tripping your co-working and entertaining monkeys. Apparently, they're pretty darn good for our brains. Bananas contain l-tryptophan, a pre-requisite for serotonin production, and also contain B6 which aids in this conversion process.

We do it all day, and yet we think nothing of it. But our breathing throughout the day often consists of heavy sighs and frustrated huffing and puffing. But conscious and concentrated breathing awakens the branch of your autonomic nervous system, releasing endorphins into the body. By just taking a few minutes to sit quietly and focus on your breathing you're actually restoring and repairing your frantic, nervous system and thus allowing your brain to hit the reset button on stress. It really is the little things that have the biggest impact on our minds and in our lives. So take a break, have a banana and just breathe. It's going to be okay. And don't forget to share this with someone who could use a little boost today!