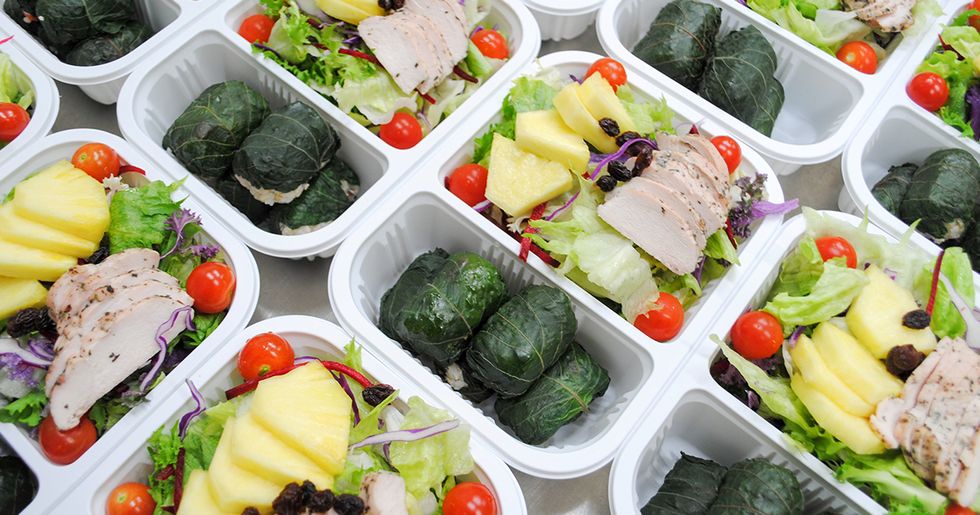 Meal prep is like a whole weird lifestyle subculture, and it can seem overwhelming and intense.

But really, these tips are for regular people like you and me who just want to make their lives a little easier. Implementing even one of these hacks will do just that.

Meal prep 'til the sun comes up!

If you've ever visited a cooking blog, you've probably seen the words "meal prep" a million times. Prepping your meals each week seems like a great idea until you're eating soggy salad for the fifth night in a row. But not all meal prep tips are garbage. Some are actually useful. Don't do all of these because that would drive you insane. But maybe try some until you find the one or two that work for you!

Make breakfast the night before.

I don't know about you, but eating breakfast is important for me to kick off my day. However, there's never enough time in the morning to craft yourself a hearty, healthy meal. Prepping it the night before can be a lifesaver, whether it's overnight oats or a frozen breakfast burrito.

A big chunk of the time and annoyance that comes with cooking is in washing and chopping veggies. That's why it will cut so much stress out of your life to do it either right when you get home from the grocery store or at another time you set aside to specifically wash and chop. Then, you have all your veggies ready to go! All you have to do is pop them in the oven when it comes time to cook.

Do double duty with your sauces.

If you're making a big batch of turkey meat sauce, slap it over some pasta or zoodles one night and stuff it into a pepper or a sweet potato the next. Voilà! Two different, yet equally tasty meals.

Precook your grains for the week.

Whether you're making quinoa, rice, farro, or pasta, cook all your grains for the week at once. They're easy to reheat, and honestly, grains like quinoa and farro are also super yummy to eat cold in salads and stuff. The next one might just blow your mind.

Put an egg on it.

Any dinner leftover can be eaten as a delicious breakfast the next day when you put a fried egg on top of it. Test me.

Think about it. If you don't mind eating leftovers, a great way to ensure you have lunch the next day is to make too much for dinner.

Chopping veggies in a processor takes seconds and cuts precious time off your meal prep that you can then use to sit in front of the TV and watch Amy Adams be sad in Sharp Objects.

Plastic, glass, whatever! Make sure they're high quality, useful sizes, and don't be afraid to label them with some masking tape and a Sharpie. Put the date on those suckers!

Meals made of different components mean those components can be used in other meals.

If you have a bunch of your friends’ shows and work happy hours that you committed to that week, don’t buy $100 worth of groceries that you’re going to end up throwing in the trash. I am totally guilty of the "plan for a week and then only make two sad dinners" thing. It’s not pretty.

Use one pan to make your whole meal.

Newsflash: Chicken and veggies can all be baked on one sheet pan. The ease of cleanup from one pot or one pan meal cannot be overstated.

Grilled chicken is great, but it can get super boring if you use the same spices/marinade all the time. Try an Asian-inspired soy sauce marinade or get savory with a spicy paprika blend.

For example, if you are making a big batch of salad with avocado, you know avocado isn’t going to last once it’s cut up in the fridge. Keep ingredients that spoil easily out until you’re ready to eat.

As long as there’s no added icky stuff, frozen produce can actually be more nutritious than the fresh stuff. Yeah, you heard that right. The next one is a piece of advice for the ages.

Create a master list of recipes that you can always reference.

These are tried and true dishes that you like to eat that always work that are easy and reliable when you don’t feel like making something extravagant. The list will take time to come up with, but it’s worth it. You don't want to have to think of a brand new meal every time you go to cook. Sometimes you just don't have that kind of energy, and that's OK.

Don't be afraid to freeze leftovers.

Cooked food will generally keep for about three or four days in the fridge, but it’ll last much longer in the freezer!

Use aluminum foil to divide pans into sections.

This way, you can cook differently-spiced meat or veggies at the same time!

Frittatas are awesome because they're so easy and you can literally put anything in them that you want. For a great portable option, make mini ones in muffin tins and freeze!

Seriously. They're more convenient than you think, but there's an order you have to stick to. It is: dressing on the bottom, sturdy veggies (your cucumbers, your peppers, etc.) on top of that, then grains/beans/nuts, then leafy greens, then cheese. Share this with someone who needs some help with meal prep!