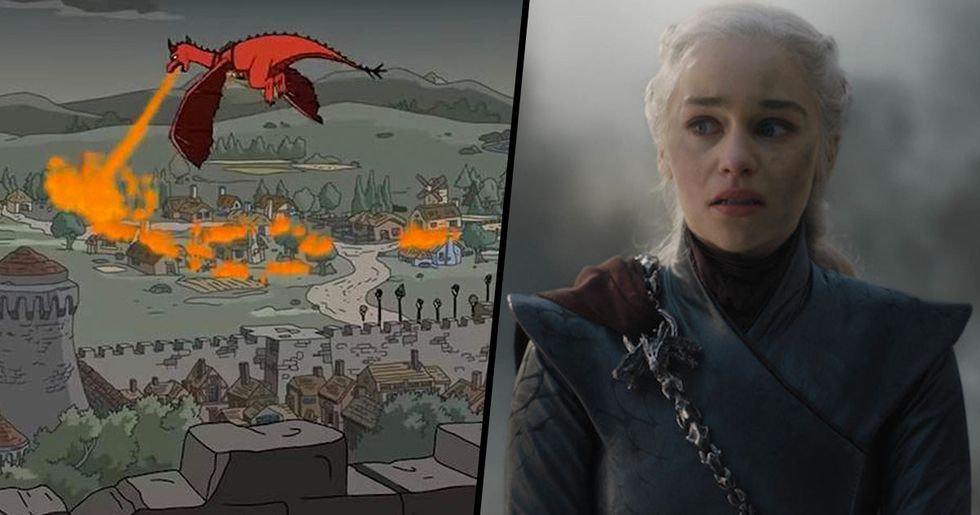 'The Simpsons' Predicted the Battle of King's Landing Years Ago

Ah, The Simpsons. We’ve loved them for so long for so many reasons: their collective vignette into the absurdity of American domestic life, Homer’s doting ineptitude, Lisa's moral guidance, Bart’s loving chaos, Marge’s extended breakdowns. We love them for the nostalgia that they provide us, the genius comedy writing and, for some time now, the prophecies.

The Simpsons has remained on the air for an amazing thirty years now, and over that time they’ve had a lot to say - much of which has turned out to have prophetic value. But it’s as the old principle goes - with enough monkeys working away at typewriters for enough time, they’ll eventually type the entire works of Dickens. "It was the best of times it was… the blurst of times!? Stupid monkey!!"

Keep reading to hear some of The Simpson's prophecies, including this most recent one, which concerns our other favorite show, Game of Thrones.

Fans have stuck with The Simpsons through thick and thin.

A ten-year-old child who had watched the pilot of The Simpsons on the day of its release would now be forty years old.

It’s recognized all over the world.

Homer’s bald head and funny mouth have graced the airwaves in almost every country around the world.

Matt Groaning and his team have been labelled America’s "cultural pulse" consistently over their 600 episodes.

It seems that they’ve been given the gift of foresight.

The Simpsons have made a bizarre amount of correct predictions.

They range from the mundane to the historically relevant.

From the Trump presidency, to team USA’s curling win.

Who remembers Siegfried and Roy?

Siegfried and Roy were a long-running Las Vegas duo, popular throughout the nineties.

In a 1993 episode in which Mr Burns opens a casino, characters, Gunter and Ernst (stand-ins for Siegfried and Roy), are mauled onstage by a white Bengal tiger.

Roy is mauled by a tiger while on stage! The attack left him partially paralysed and ended his career.

Auto-correcting technology is now an established facet of daily life, but that, too, was first predicted on The Simpsons.

In a 1994 episode, Kearney sends a memo asking fellow bully, Dolph, to "beat up Martin" using his "newton". The message auto-corrects to the instruction to "Eat up Martha".

We all use FaceTime - be it to break up with our partners without actually having to be in the room, or catching up with our digitally illiterate parents.

During the 1995 episode, "Lisa’s Wedding," Lisa chats to Maggie over a distinctly FaceTime-looking digital platform.

Fifteen years after the episode, in 2010!

Back in 2012, there was a stir when a faulty Pennsylvania voting machine was recorded swapping a vote from Obama to Romney.

The Simpsons aired a clip of Homer attempting to vote for Obama as a machine repeatedly changed his vote to McCain.

The real voting machine was taken out of commission after that.

"The Wizard of Evergreen Terrace"

In this 1998 episode, Homer is pictured in front of a chalkboard with an equation written on it. According to Dr Simon Singh, the equation is remarkably close to the genuine mass of the God Particle.

The God Particle wasn’t discovered until...

In 2014, the Ebola virus ravaged huge swathes of the third world. But long before that, something curious happened on The Simpsons.

In a 1997 episode, Marge takes out a book, offering to read it to Bart. The book’s title is "Curious George and the Ebola virus".

This is most likely the most famous precision that The Simpsons have got right. The election of the Commander in Grief.

When Bart goes forward in time to adulthood, he finds that Lisa has become president, after assuming power from her predecessor, Donald Trump. Lisa tells the cabinet, “The country is broke… How can this be?"

When asked about it…

Writer, Dan Greaney said, "That just seemed like the logical last stop before hitting bottom … It was pitched because it was consistent with the vision of America going insane."

And now, Game of Thrones is becoming a part of the story.

If you haven’t seen the newest episode, you shouldn’t be reading this.

The most recent episode of GoT, "The Bells", sees everyone’s favorite dragon queen finally fall to the madness of her father and go on a rampaging killing spree, massacring the citizens of King’s Landing as they try desperately to surrender.

A 2017 episode of The Simpsons called "The Serfsons" - complete with all parodic borrowings of Game of Thrones - ends with a family looking out across the city as the dragon burns it to the ground. Spooky huh?