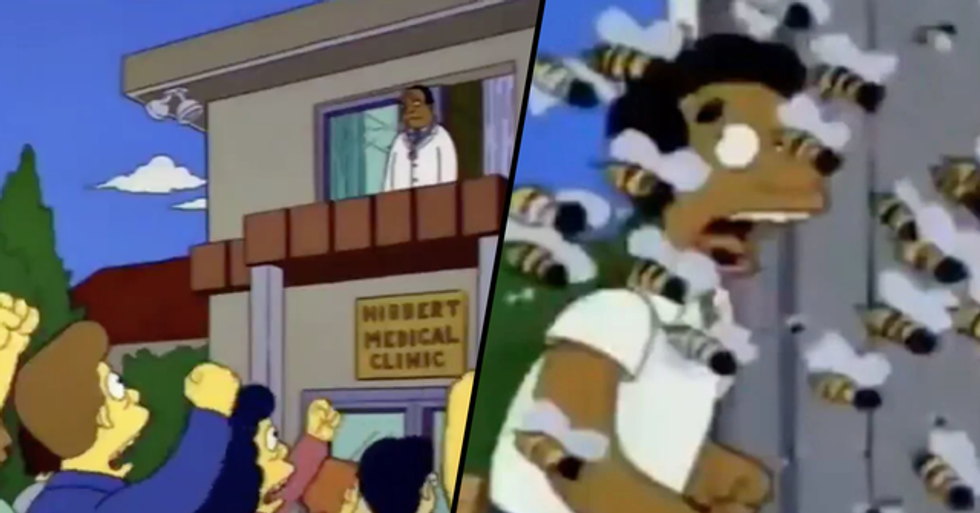 After decades of eerie predictions, one of the writers of The Simpsons has come forward to admit that one of the episodes somehow predicts the "whole of 2020."

Keep scrolling to read about the spooky episode, and to hear what the writer had to say on the matter...

The Simpsons have seemingly predicted the whole of 2020 in just one episode.

From the tragic death of Kobe Bryant to the ongoing medical pandemic, there isn't much from this dreadful year that The Simpsons hadn't already covered years before.

But the iconic cartoon has been dropping these spooky predictions for years.

For decades now, The Simpsons have been eerily predicting major world events years before they actually happen. For example...

Back in 1995 in their sixth season, The Simpsons introduced the idea that one day, you would be able to use your watch as a cell phone. The futuristic episode, titled "Lisa's Wedding" was aired twenty years before the release of the Apple Watch. Spooky, right?

They depicted the infamous horsemeat scandal years before it happened.

In this 1994 episode, Lunchlady Doris used "assorted horse parts" to make yet another disgusting lunch for the students at Springfield Elementary. 9 years on from the episode, the Food Safety Authority of Ireland found horse DNA in over one-third of beefburger samples from supermarkets and ready meals. Yikes.

The Seigfried and Roy tiger attack happened on The Simpsons before it did in real life.

The Simpsons parodied entertainers Siegfried & Roy in a 1993 episode called "$pringfield". During the episode, the magicians are viciously mauled by a trained white tiger while performing in a casino. In 2003, Roy Horn of Siegfried and Roy were attacked during a live performance by Montecore, one of their white tigers.

They predicted the Ebola outbreak, too.

In a scene from the episode, "Lisa's Sax," in the ninth season, Marge suggests Bart read a book titled "Curious George and the Ebola Virus." The virus wasn't particularly widespread in the 1990s, but years later in 2014, it was the top of the news agenda.

Disney take over of 20th Century Fox was The Simpsons' dream before it was Disney's.

In the 1998 episode from the tenth season, "When You Dish Upon a Star," Ron Howard and Brian Grazer produce a script Homer pitches. The script is being produced at 20th Century Fox, and a sign in front of the studio's headquarters reveals that it is "a division of Walt Disney Co." On December 14, 2017, Disney purchased 21st Century Fox for an estimated $52.4 billion... Nineteen years on from the episode.

And they knew about our notoriously faulty voting machines before we did.

In this 2008 episode from the twentieth season, we watched as Homer tried to vote for Barack Obama in the US General Election, but the "faulty" machine changed his vote. 4 years later, a voting machine in Pennsylvania had to be recalled after it kept changing people's votes for Barack Obama to ones for his Republican rival, Mitt Romney.

And, of course, they predicted Trump's Presidency.

Okay, this is a big one. In an episode called "Bart to the Future," which was broadcast in 2000, Lisa has been elected as his successor and quips: "We’ve inherited quite a budget crunch from President Trump." In an interview with The Hollywood Reporter, writer Dan Greaney called the episode "a warning to America."

As for this year?

Well, the cartoon has stuck firmly to tradition by predicting an awful lot of the events that have occurred in 2020.

In just one episode, the cartoon apparently predicted 3 major events from 2020.

The outbreak of the ongoing medical pandemic, the swarm of "killer bees", and the death of NBA star, Kobe Bryant.

Yep, a 1993 episode seemingly predicted it all.

The episode, titled "Marge in Chains", shows how a virus called Osaka Flu spreads through Springfield after residents order juicers from Japan.

2 Japanese workers can be seen packing juicers with one of them saying, "Please don't tell the supervisor I have the flu" before coughing into a box.

And, when the town begs for a vaccine...

Murder bees show up, which is scarily alike to the arrival of the murder hornet here in the US.

And, in the same episode...

Kobe Bryant's death was apparently predicted. As the town ends up in a state of panic because of the outbreak, a news reporter in a helicopter repeatedly says the phrase "going around and around" which theorists claim is a direct reference to what happened to Kobe Bryant's helicopter before it crashed. Okay, I'm not too sure about this one...

But, regardless of the legitimacy of these predictions...

The Simpsons are from the future. They have predicted everything that has happened to us. Like trump becoming pres,… https://t.co/JhhRXH5IJC
— dankhomer (@dankhomer)1580579130.0

People have been going crazy about the resurfaced episode.

And now, one of the writers has weighed in on the spooky coincidence.

For years now, we have been heavily debating the secret behind The Simpsons predictions - Are the writer's psychics? Do they have a time machine?

But it turns out they're just regular people.

And many of these spooky predictions have been credited to a funny team with hundreds of different jokes and storylines. "You're in a room with ten to twenty really funny people," The Simpsons writer Al Jean told the BBC last year.  "So maybe the best thing is when Trump does something stupid and you've got a lot of people who can make jokes about it right away."

But one of the writers seems to be keener on the psychic idea...

And has recently admitted to "predicting" 2020's awful events.

With a simple, "ok fine I guess we did." Brilliant.

Though some Twitter users had some stern words for Bill...

When will they give us a break and start predicting some happier, more positive events?! For more on the iconic cartoon, keep scrolling to read about when the show will sadly be coming to an end...