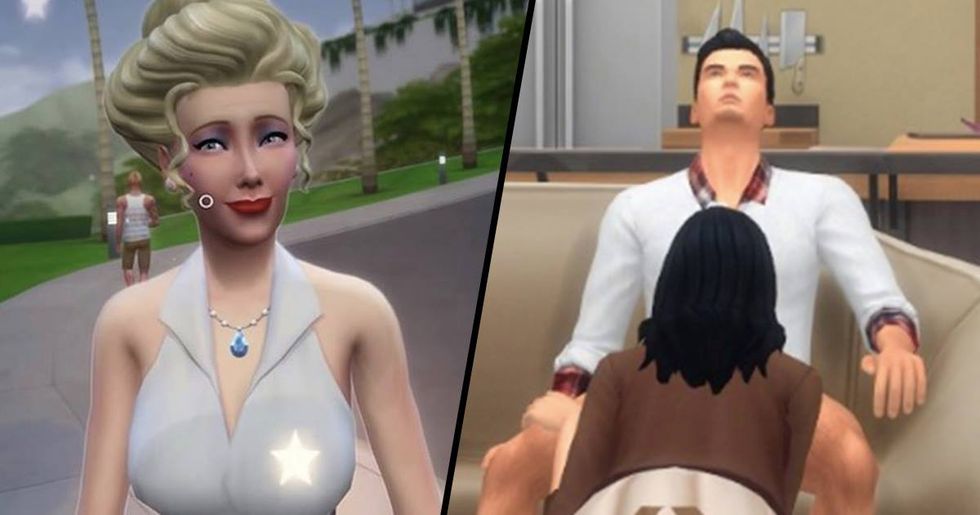 ‘The Sims 4’ Getting A First-Person Mode, Players Are Already Plotting Nasty Things

Electronic Arts (EA Games) has announced that it's adding a first-person mode to The Sims 4.

The news came during a recent livestream on Twitch from developer EA Maxis, where the team showed off a new first-person camera for the game.

It's a total game changer...literally

According to Maxis, the first-person mode has been a long process in the making, and had to undergo numerous revisions and refinement before it was not only in a state that didn't break the game, but was an enjoyable addition to the game.

It's a dangerous business these video games...

Apparently, not only getting the mode to properly work in the game was a hassle, but the initial version was causing people to get sick. Turns out, The Sims 4 wasn't really designed to ever take in from the first-person perspective. "We know this is not for everybody; it's just weird and fun and quite random."

Anything free is good, right?

One tweet from @awkardgzb said "finally, I can watch my sims f**ck in first person". The whole of Twitter tutted at this crude tweet, fully well knowing this will be the first thing they try and do with the update.

Exciting times in The Sims world

Sexually explicit computer gaming has been first on all of our agendas and now finally we have our wish...or maybe it's just me...but these are exciting times ahead.

It's sure to get you flustered

Just imagine this scenario but in a pixilated & computerized version...makes you hot under the collar, hey? Again, that could just be me.

The game was good...but not perfect

Sure you could live vicariously through it, falling asleep in the middle of the street or taking a dip in the swimming pool only to have the ladder removed so you're unable to get out...but now you can do all that and more in the first person.

It's good to know technology has come a long way...what next, they'll invent something which allows us to get up, get out and do these things for real, like shoes.

That all virtual sex talk aside (for the time being), previous versions allowed for things almost as good, like someone dressed as a Lama dancing Gangnam Style.

It's in our nature to want control people

We all want to take control of as much as we can, but unfortunately it's too difficult and stressful to in the real world and that's why we take it all out on our self-made characters.

Playing God can be fun from time to time.

It's probably healthy for each and every one of us to pretend to be the controller of our own little universe every so often...either that or it's slowly turning us all into maniacal, power-hungry psychopaths...

Fed up of watching TV?

Well there's no worry, just re-create your favourite TV show using Sims. We all want a lower quality, less funny and more laboursome version of our fave TV show out there.

Quit your job and just get one in The Sims. Virtual money and families are way better than the real thing.

Why have real sex?

When you can play with your partner in The Sims and have virtual relations instead...no risk disapointment, well, unless your laptop battery runs out.

But maybe try not to take it TOO seriously...

It's not life or death whether your garden gets tended to in the game.

Don't let it affect your relationships

Being caught getting up to no good in the world of The Sims could have bad repercussions. The new update of first person could only mean bad things if you're caught by your other half up to no good.

It's addictive and can be tempting to play at work

Don't get caught by your boss playing games at work, especially if your boss is wearing a Panda costume - he's clearly insane as it is, let alone after catching you playing games on work time.

Vent your insanity through the game

Ever felt like setting fire to the pizza and staring manically at someone while you do it? Well don't risk your reputation, have your avatar do it on your behalf.

It can keep you company

On the bright side, if you're a lonely person, you can create friends and enjoy the time you spend together.

Unless you choose to recreate your real life identically and just create your identical lonely avatar who runs around alone. At least now you can experience it from a first person perspective. Every cloud...

Or you could try to get out more

Maybe try to recapture your youth and find a nice slide to go down in a glamerous fashion.

Or you could find a new activity that you've not done before and will most likely never ever do again.

Don't be inspired by a game

We must always remember that not everything in computer games translates into the real world. Never jump on a tortoises back or eat wild mushrooms and never put a baby in a BBQ

Everyone just wants to get famous, well what better way to put on the training wheels and try it virtually first? Maybe you'll even get famous for being that one person who played for 100 hours straight and your hair fell out because of it? Fingers crossed!

Nothing says having fun like sitting down and watching other people live their lives. I say nothing but what does say "fun" more than just that is being in total control of them.

But at the end of the day it'll be one of those things you'll be glued to for all of eternity. Just accept it and embrace it.