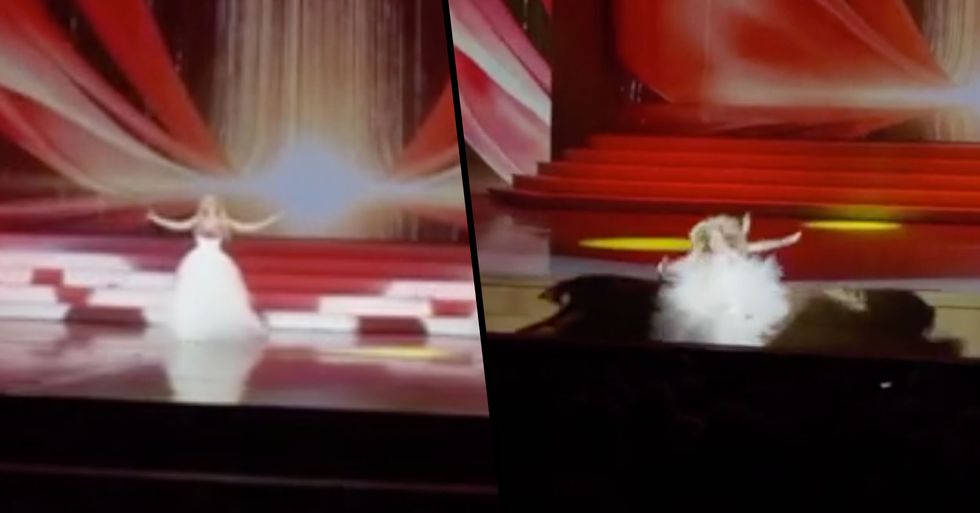 Falling on stage is probably up there with one of the biggest fears when it comes to performing in front of an audience. And sadly for one singer, this fear became a reality last week - after she plummeted ten feet mid-show.

Although after the footage emerged online, viewers were quick to point out something very unusual about the fall...

Keep scrolling to see for yourself.

Getting up on stage is a nervewracking experience for anyone.

Stepping out and performing in front of a crowd is probably one of the most daunting things you can do.

And of course, you don't want to deliver anything less than a perfect performance.

So, when things go wrong... it can be catastrophic.

From nasty tumbles to all-out fails...

There hasn't been a shortage of on-stage mishaps.

Remember when Pink! took a painful-looking tumble during her funhouse tour?

The star's acrobatic displays are nail-biting as it is, but this proves just how dangerous they can be.

As you probably guessed... Gaga well and truly lost.

Even Rhianna isn't immune to an on-stage mishap...

This is the last thing you want while you're strutting your stuff on stage. Ouch.

And of course, who can forget this?

Madonna at the Brits is probably one of the most brutal-looking falls we've seen... and she carried on performing! Props to her on that one...

It seems that last week, yet another singer has fallen victim to the dreaded on-stage fall...

And we have to say, it's one of the worst we've seen yet... Keep scrolling to take a look.

Russian singer, Anastasia Vishnevskaya, was performing on stage on Friday.

The thirty-year-old took to a theater stage in Krasnoyarsk, Siberia to deliver a performance to a strong crowd of 1,375.

The singer dramatically fell off stage...

The stunned crowd was unable to see what happened to her at first...

Especially since, remarkably, she continued to perform while lying on the floor of the pit.

Things were much more serious than they initially appeared.

The star attempted to stand back up and continue singing before a member of the orchestra helped her onto a chair. The pit was also raised to allow the audience to see for the end of her track titled "100 hours of happiness."

The singer was rushed to the emergency room and later learned she has sustained some serious injuries...

She was told she had fractured her foot and suffered major bruising. No wonder she couldn't stand...

But, after the footage emerged online, eyebrows were quickly raised.

Many viewers grew suspicious of the fall for a number of reasons.

Some accused the whole thing of being planned.

via: The Sun comments

Seems like a pretty painful thing to yourself through just for a bit of attention though, right?

Others came up with a different theory...

Many claimed that her fall, and the fact she continued performing while on the floor,  proved she wasn't singing live and had been lip-syncing the whole time.

Anastasia has since hit back at these claims.

Posting from the hospital after emergency surgery, she wrote: "I didn’t notice the edge of the stage and fell into the orchestra pit on the musicians who were preparing for the next number." "I was lying on my tummy singing the song… Spiteful critics only discuss the fact that I continued to sing despite the trauma – and blame me for not singing live."

"I wish there was less hatred and envy around us. On the video I don’t sound as clear as I wish I did." "But since this was definitely live please enjoy it as it is." Concert presenter Roman Bogdanov also chimed in: "I am certain that very few artists in the world would be able to finish singing in such an extreme situation after falling into an orchestra pit, breaking a foot and getting bruised." "Some in the audience (wrongly) believed it was pre-planned."

What do you think? Horrific accident or some kind of pre-planned stunt? Of course, this is far from the only jaw-dropping fall off stage. Keep scrolling to watch the moment a fan drops Lady Gaga off the stage and the unexpected thing she does after...