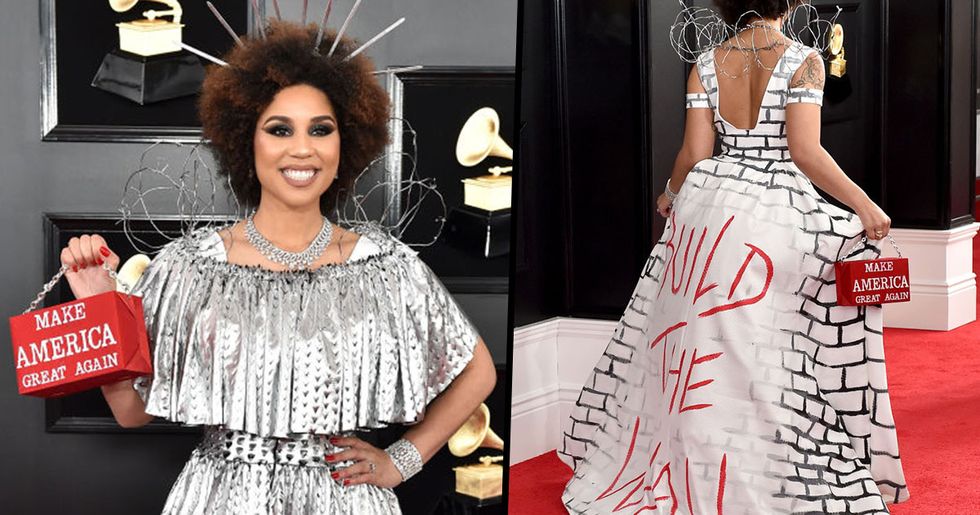 Singer Wears 'Build the Wall' Dress to the Grammys

The Grammy Awards happened last night, and, as ever, celebrities showed up dressed to impress. Celebrity outfits are always a valuable source of gossip, but no one stood out more (or for quite such terrible reasons) as singer Joy Villa.

The strident conservative didn't want to look pretty - her aims were far more politically attention seeking. Villa's dress was a paean to right-wing ideology and one particularly racist policy in particular. Her "Build The Wall" attire came complete with barbed wire shoulder pads and a Make America Great Again purse, and the internet is understandably angered.

Villa is hardly a household name in terms of her music - and it seems clear that this dress is an ill-advised and unnecessarily cruel grab for attention by any means necessary. Luckily, the internet appears to have seen through the publicity stunt, and it seems any headlines Villa has grabbed have been wholeheartedly negative.

The Grammy Awards are an annual celebration of achievement in music.

Originally called a Gramophone Award, the ceremony began in 1959, making this year's ceremony the 61st.

The Grammy Awards are part of a wider group of American performance honors.

These are the Academy Awards, for film, the Emmy Awards, for television, and the Tony Awards, for stage. Winners of all four achieve what's called the EGOT, and there are only fifteen in history.

While the Grammy awards are designed to celebrate musical achievement, they're popular for another reason.

Like all awards ceremonies, the Grammys represent a great opportunity to get a peek of all the year's biggest stars. People's red carpet looks are always exciting to see.

And this year certainly didn't disappoint.

People certainly take the opportunity to make a splash.

Here's singer and songwriter Tayla Parks in an amazing outfit reminiscent of pink confetti. We particularly love the choice of Converse sneakers.

It's a night where all the stars are looking their best.

Speculating on who rocked the best looks, and who missed the mark, is the sort of celebrity news we live for.

But not everyone is simply dressing up.

As one little-known singer, Joy Villa, proved this year. Here she is - and at first glance, you probably wouldn't notice anything unusual about her Grammy Awards look.

Villa is no stranger to an attention grabbing red carpet look.

Here she is showing up to the 2015 Grammy Awards in a gown made of orange plastic netting, showing off pretty much her entire naked body.

But over the years, Villa's Grammy looks have become more overtly controversial.

Here she is in a religious looking outfit at the 2017 Grammy Award ceremony. It seems she's set on looking as eye-catching as possible, for good or for ill.

This dress was actually part of a greater "big reveal."

Villa's 2017 Grammy gown pulled away to show off a Trump campaign adorned dress underneath. As you can see, Villa is no stranger to an unnecessarily political red carpet look.

This year was no exception.

Villa walked the red carpet in what initially looked to be a fairly innocuous silver dress, albeit with some off-beat barbed wire shoulder pads and a MAGA-emblazoned handbag.

But as she posed for the paparazzi, Villa had a big reveal.

She dropped the silver out-layer, to reveal a brick printed dress designed in support of President Trump's border wall between the US and Mexico.

The back of the dress was emblazoned with a slogan.

Suddenly, the barbed wire shoulder embellishments didn't seem so fashion-focused - and instead took on a much more dangerous effect.

Here's a look at the outfit in all its "glory."

Villa also went with a horrifically spiky fence-inspired headdress to really hammer her point home. The creepiest accessory, though, was her wide, happy grin.

The dress was designed in support of Trump's border wall.

The controversial policy was one of the main messages in Trump's electoral campaign, and the majority believe it has a racist ideology behind it.

On top of that, the wall has been a major point of contention in the government.

The refusal to grant Trump the necessary funds to build his wall led to him implementing a government shutdown, which lasted for over a month.

All of this just makes Villa's choice of dress seem all the more idiotic.

Whether she truly believes in the policy or not, and whatever her reasons for her beliefs, the Grammy Awards red carpet is hardly the place to display these thoughts. The incredibly violent imagery the dress conjures up could be seen as highly upsetting.

Musician Joy Villa shows up to the #Grammys each year in pro-Trump attire. Some call it a PR stunt. She calls it be… https://t.co/fJT6Tk0JeS
— Zulekha Nathoo (@Zulekha Nathoo)1549838854.0

This was just one look in a line of pro-Trump attire Villa has sported at the Grammy Awards, and many see it as a desperate plea for attention, whatever the cost.

If you can't make it out, that's a fetus print on her gown. She also carried a pro-life emblazoned handbag and her signature disconcerting smile.

It certainly looks like a big push for publicity.

After all - who has actually heard of Joy Villa in terms of music? Many people on the internet took on a similarly skeptical view.

In fact, some questioned exactly what Villa is famous for.

Is it music? Or is it turning up to awards ceremonies wearing the most politically shocking dress possible? The majority of the internet would probably say the latter.

Some pointed out that provoking a reaction is likely all that Villa was hoping to achieve.

Build the wall lady just wants attention just like she did in previous years and for the love of God stop giving it… https://t.co/7PHATivicQ
— thank you (@thank you)1549842663.0

And now her name is out there, perhaps a few more people will actually listen to her music. But if that is the case, then it sort of makes things even worse - Villa would then be appropriating the suffering of millions just to further her career.

Either way, the reaction has been overwhelmingly negative.

Those who stand in opposition to her fashion choices even managed to make a quick edit to her Wikipedia page, before it was quickly removed.

There was another overwhelming reaction to Villa's dress though.

And that reaction was "...who?" It seems almost nobody has even heard of the "singer" - which makes it a little weird that she was invited to one of the biggest award ceremonies of the year.

In spite of the internet's vitriol, Villa has doubled down on her stance.

She assured Variety she stands behind the message of her dress, saying “I believe in the President, I just released an album called ‘Home Sweet Home’ and it’s all about my love for America, barbed wire, I’m having fun with it."

Villa wasn't the only "celebrity" wearing a controversial outfit.

Singer Ricky Rebel wore a Trump-supporting jacket on the red carpet. He stated, "“A radical murdered 49 LGBT in cold blood at Pulse Nightclub. That could have been me, my family, and friends there. I voted for the person who wanted to heavily vet refugees. The other candidate wanted a 550 percent increase in Syrian refugees. It only takes one."

Villa is absolutely insistent she wore the outfit for genuine reasons.

She told the Hollywood Reporter, "I was a secret Trumper for months. When I decided to wear the Trump dress, I figured that most people would try to ignore me, they'd be so upset. But the rebel in me was like, 'I have to come out and support the president.'"

Since the ceremony, she has continued to speak out on Twitter.

Dear @realDonaldTrump... AMERICA SUPPORTS THE WALL! I support all you have done for Black and Latino Americans. Tha… https://t.co/Sa0LboqpoE
— Joy Villa (@Joy Villa)1549842736.0

Villa has posted many controversial Tweets about her outfit, and has even been getting into online arguments with her critics.

Although we think this Tweet really hits the nail on the head.

Just a thought... If Joy Villa had more singing talent then she wouldn’t need attention each year but posing in racist dresses.
— Tony Posnanski (@Tony Posnanski)1549884892.0

Notice that none of the biggest stars and award winners this year felt the need to wear political outfits. That fact alone speaks volumes.

So, just as quickly as Villa has sprung to our attention, we propose we forget her.

If publicity is what she wants, then lets end that here, and focus on some of the more pleasant stories from the 61st Grammy Awards instead.