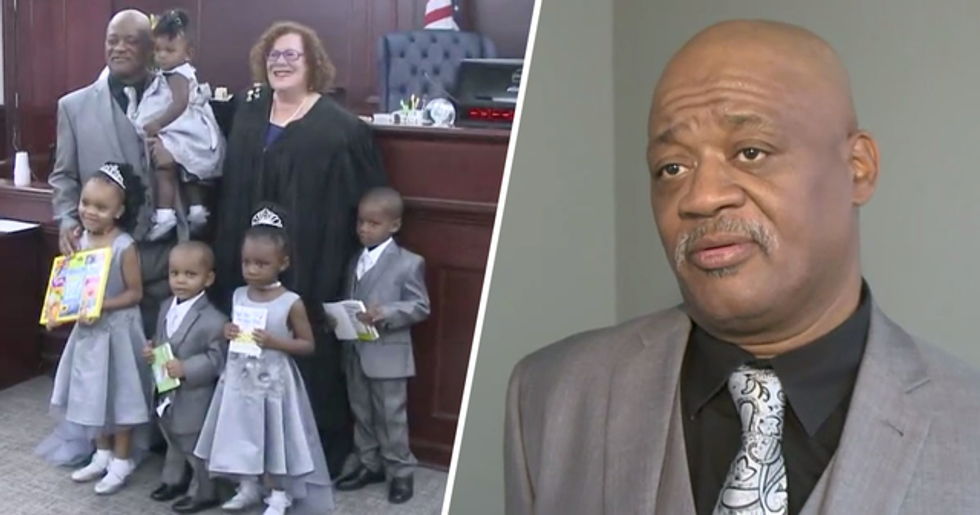 It's a sad reality that too many children in the foster care system end up in less-than-ideal homing situations. And one of the hardest to deal with? Being separated from their siblings. After losing their parents, many kids in the system rely on their siblings for a feeling of security and love.

But one Buffalo man has managed to stop this. Lamont Thomas has been fostering children for decades and is known in the community for having a gigantic heart. And now he's proven it, by adopting a whopping five children under six years old, to prevent the siblings being split up. Our hearts are melting.

Fostering and adoption are among the noblest things a person can do.

Taking care of the most vulnerable members of society - even when you don't have to - is a truly heroic thing.

And there's one hero who stands out, even among the rest.

This is Lamont James of Buffalo, New York. He's one of the most prolific foster fathers of all time - but his latest move may be his most beautiful yet.

He's been fostering kids for over nineteen years.

"In the beginning, I was helping out some friends. They had lost their child to the system," Lamont told Good Morning America.

"I went on and got certified and became a foster parent. I haven't stopped since."

And since then, Lamont has fostered over thirty kids - alongside his two biological children.

In 2007, he made the move with the first kid he ever fostered, Michael. "He was my third foster home and it ended up being my forever home," 27-year-old Michael shared.

"Lamont never turned [a kid] away."

"They either aged out or went back home to their own families."

Lamont thought he was in the retirement scene.

But then he heard about a very special case. Lamont discovered there were 5 siblings in need - and decided to get recertified in order to help them out.

Lamont's many foster kids had grown up and moved out.

But the 5 new siblings, Zendaya, 5, Jamel, 4, Nakia, 3, Major, 2 and Michaela, were the children of one of Lamont's former foster kids.

"The kids ended up being taken into care - I believe it was due to neglect."

"They had them in 4 different homes, 4 different cities. They were separated for over a year-and-a-half."

Once the kids were back together ...

Lamont fostered all 5 for 2 years. But wanting more security for their situation, Lamont decided to take steps to adopt, making him their legal dad.

"I was fighting to keep back the tears," Lamont said.

"Every day I think about it, my eyes swell up. All that we endured to make this happen, it was something."

"They bring new energy to me."

"They're lovable kids, very affectionate. They deserve to be raised as siblings, and that was my fight."

The crowd couldn't believe Lamont's generosity and applauded in the courtroom.

"It's amazing he's taking on all of them. He does anything for everybody. He's a really a great man," shared biological daughter LaMonica.

But to Lamont, it's less of a big deal.

This man is a true everyday hero, and we foresee a very happy future for his new family. Want another heartwarming adoption story? Read on for the incredible couple who have brought an HIV positive baby into their family.