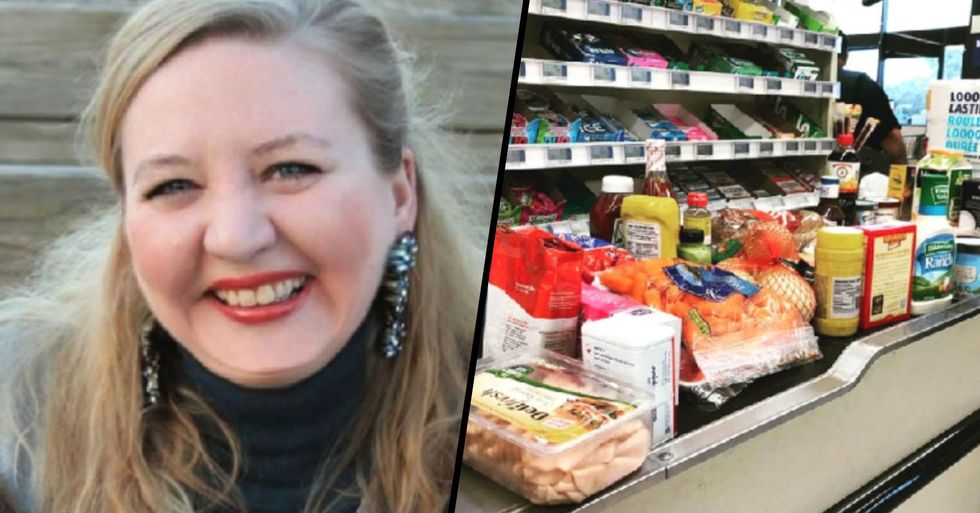 While the world is struggling to cope with the new lockdowns, and people are stockpiling unnecessary amounts of food, there are people out there who are struggling to even pay for a weekly grocery shop.

One woman claims god spoke to hear and what he told her to do will leave you speechless.

Being a parent is one of the most rewarding experiences.

Raising a child and sharing that special sort of unconditional love is beyond anything you can imagine.

But it does come with it's fair share of ups and downs.

Anyone who's raised a kid will confirm that they don't call it the hardest job in the world for nothing.

Even with a two-man parenting team, it's difficult.

But if you're managing it as a single parent, you definitely deserve some sort of award.

Taking on the role of mom and dad can feel impossible, and the costs that come with raising kids are just some of the many challenges single parents face.

One single dad found himself struggling for cash when it came to paying for his groceries.

But it was his lucky day, a woman working through the "divine power of God" came to his rescue.

Sara Fleming said she heard the voice of God loud and clear.

When seeing that the man in front was struggling to pay, Sara insisted God told her: “It doesn’t matter if you don’t have the money…I’ll provide. Trust Me."

So she pulled out her wallet and told the cashier to put his bill on her card.

All ninety-five dollars of it, that the single dad had racked up.

This wasn't just your average random act of kindness.

She insists her actions came from the heavens above, claiming it was through divine command that a voice told her to do it!

Explaining how God connects the dots between two seemingly random people in order to bring them together.

It all started over the holidays.

Happy Monday Tweethearts, Everyone in the world is going through a difficult time right now. We still have things… https://t.co/JqWgmRrQBc
— Sonia Styles (@Sonia Styles)1584979448.0

Sara was at the grocery store at 10 pm that night buying some food. She said in a post: “Sweet friends, this is a true story. I’m sharing for others to hear of God’s goodness and mercy. It’s not about me. Great things HE hath done!"

That's when she noticed the man in front struggling to pay.

He was already buying the bare minimum and had even started taking things off to see if that would help, but it was still too much. She said: “I watched as the man in front of me asked the cashier to put things to the side. Over and over again. He kept swiping his card. Declined."

We've all been there before, laughing it off awkwardly before putting it on another card.

But this Dad had no other options to go to.

This was all happening right after Thanksgiving.

Hell, if @hallmarkchannel can have a Christmas Movie Marathon, then I can damn sure cook a Thanksgiving Dinner :-)… https://t.co/nLimr1fUhs
— Eric Taubert (@Eric Taubert)1584817010.0

Sara had wondered if they even managed to celebrate it at all. She said: “There was a girl and boy with him, and I heard them call him ‘Dad’ several times. The girl was a pre-teen, and the boy was about my son’s age. I could see the embarrassment written all over their faces."

It was when the cashier began to put the groceries to one side that she felt it.

She said: “Then suddenly, I felt it. It was like a gentle shove on the back and a mild electric shock to my heart." It said: “Pay for these groceries. It doesn’t matter if you don’t have the money…I’ll provide. Trust Me."

But she was hesitant in case it caused more embarrassment to his kids. But once again, “that small voice still called again. Another shove. Stronger this time. ‘I’ve got it,’ I blurted out loudly, as heat flooded my face."

The dad couldn't believe what he heard.

Her response quickly brought him to tears, which prompted his daughter to hug him. If I was watching this, I'd be a blubbering mess right now. The dad said: “I don’t know how to thank you. I’m a single Dad. It’s so hard." Sara replied: “It’s okay. I wanted to help. I know it’s what God told me to do. And I have been there."

Sara prayed that God would be true to his word and cover her purchase.

According to her, he did. And things got even weirder...

A couple of months later, Sara spotted the dad again.

Sara was sitting in church when she noticed the single dad and his two kids in her church, but not only that, they were the only other people sitting in her row.

A sense of overwhelming realization came over Sara.

The dots had finally been connected. Out of all the churches in their city, he came to hers. She said: “I never told him I was a Christian. I never even told him where I went to church. The same One who brought this Dad and his family to my church that Sunday."

Sara wants to spread his message and let everyone know.

“it’s not about me." It’s all about him, saying: "Glory to the Lord God Almighty, great things HE hath done." It sure is mysterious, and if it provokes people to be kinder to others, then I'm all for it. Keep scrolling to read about a single dad that has done the most extraordinary thing...