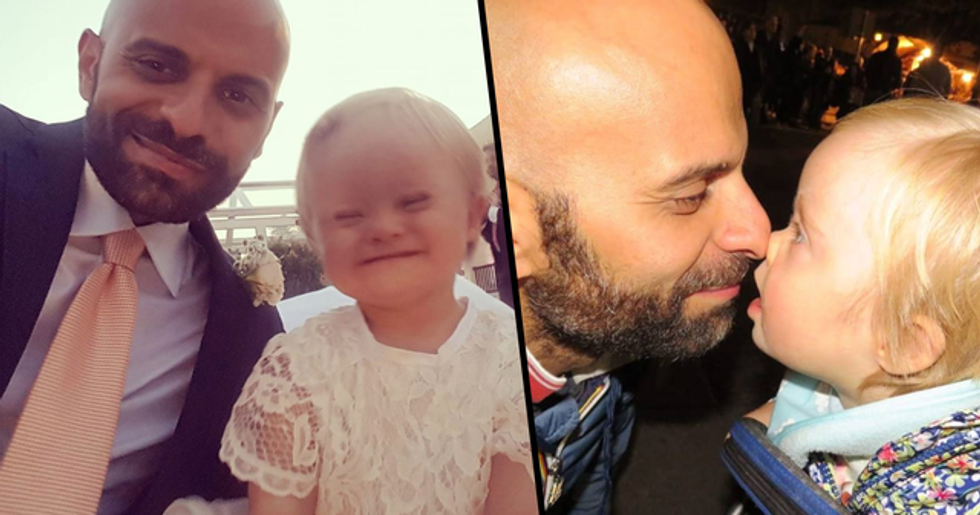 An openly gay, Catholic man has challenged the stereotypes of fatherhood, religion, and family in his country of Italy by adopting Alba, a toddler with Down Syndrome, who was rejected by over twenty different families

Luca's story has gone viral for several reasons, paramount of which may be the fact that social services don’t often grant custody to a single, homosexual man.

Keep scrolling for the full story, and to see the adorable pictures of Luca and Alba together...

Adopting a child is never going to be an easy process.

Taking in a child to raise as your own will always be a momentous decision, and therefore the process to become a parent is a long and emotional one.

However, there are certain children who may never get adopted...

Many children with mental and physical disabilities often find themselves as orphans for the majority of their childhoods.

And this makes it harder for them to find adoptive parents.

Because of the higher levels of care required for disabled children, many parents-to-be are put off adopting these children with additional needs.

Most people look only to adopt children with no special needs or disabilities...

However, some were born to look after those who require a little more care than others.

Luca has always dedicated his life to helping those less fortunate than him.

Since he was a teenager, the Italian-born Luca has volunteered for various social services programs.

But, living as an openly gay man in Italy...

Luca was already at a disadvantage when it comes to being able to adopt a child.

Both his relationship status and sexuality made it difficult for him to ever become an adoptive parent...

Trapanese said that, because he was a single parent, he was told that it would be incredibly difficult to ever officially adopt a child.

He would only be able to adopt a child with health or behavioral problems.

But that wasn't an issue for Luca...

As he just wanted to become a dad. "I was absolutely fine with that," Luca told the BBC in an interview last year. "Since I was 14 years old, I have volunteered and worked with the disabled."

In July of 2017, after years of unsuccessful adoption applications, Luca received a phone call.

His potential daughter had been found.

This little girl had had a tremendously difficult start to life - She had been abandoned by her biological mother, likely because she had Down Syndrome, and had already been rejected by twenty different families.

But, little did this orphaned child know...

She was about to get the best dad she could ever ask for.

Luckily, Luca had a lot of experience with children with Down Syndrome.

He had spent a lot of timing volunteering for the “A Ruota Libera" Foundation, a group that assists these children with basic skills for day-to-day life.

So he and Alba were a match made in heaven.

However, officially finalizing the adoption was a lengthy and drawn-out process.

And, being a single, gay man, Luca didn't exactly meet these "traditional" criteria.

However, Luca wasn't about to give up.

After months of tireless fighting to make Alba his daughter, Luca succeeded, and was able to bring her home.

Alba has now grown into an adorable, blonde-haired toddler, and Luca couldn't dote on her more.

And he has now surpassed 120,000 followers, who all love to see his and Alba's day-to-day doings.

Yet despite all the publicity...

Luca is simply living out his best life with his daughter by his side. "I think mine and Alba's story shatters so many stereotypes about fatherhood, religion, and family. But I didn't mean it to be that way - this is nothing but our life story."