Single Mom Facing Homelessness Builds House for $10,000 Instead of Taking out Mortgage | 22 Words 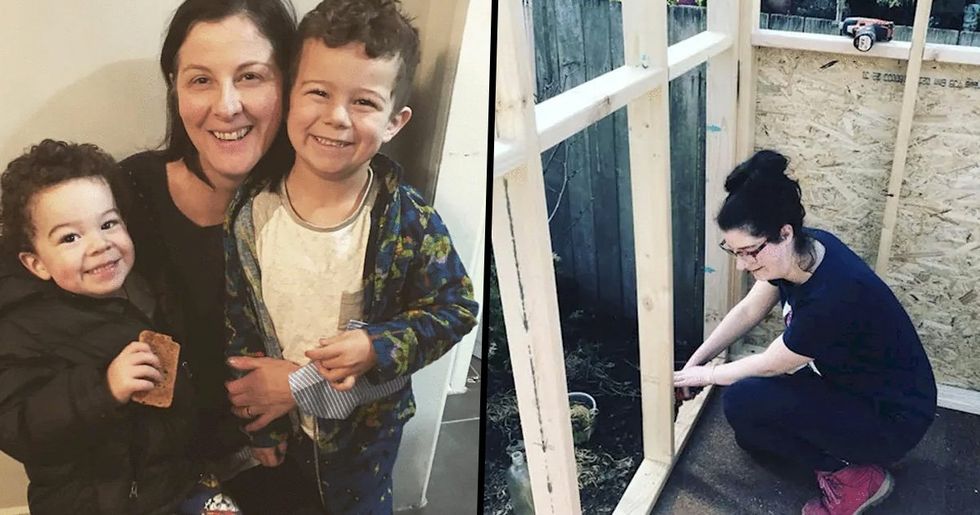 Single Mom Facing Homelessness Builds House for $10,000 Instead of Taking out Mortgage

We all have goals in mind for our future, but sometimes those plans are met with difficulty. Things may not go exactly as you expected, yet when you adapt and improvise, the outcome is as awesome as your original plan.

That’s what Charlotte Sapwell of Victoria, Australia did when faced with the possibility of homelessness due to overwhelming debt. As a recent divorcee, Charlotte had to raise her two boys with little financial help from her ex-husband and few housing choices. Either live in debt, continue sleeping on her parents' couch, or build her own home on a small budget.

She chose to live debt free and build her own home for $10000.  It is an amazing achievement for anyone in today’s housing market, and extra bonus points for reaching this level of DIY while raising children. Charlotte has documented her journey on her Facebook page Charlotte Sapwell – In the House That Mum Built and has blown us away with her hard work and dedication.

Instead of spending years paying off a home loan, Charlotte Sapwell put her thrifty skills to use and decided to build a tiny home from scratch.

With her motivation to get a roof over their heads, she set out to complete the ultimate DIY project.

Charlotte could have bought a less expensive home, or rented, but with two small children and large debt, she felt the combination would be too overwhelming.

The housing market is expensive and can be even more challenging for single parents.

With the help of her grandfather's construction skills and a small loan, she built a cozy home perfect for the family of three.

He let her build on a small plot of land on his property. Charlotte is currently working on paying back the money he lent her.

A portion of her tiny home was funded by selling furniture and appliances that would not have fit in her new small living space.

As a society, we feel like we need a lot of stuff to live happily. The reality is– the less you need the more you have.

The majority of the $10,000 budget went to building materials while the remainder went to furnishing.

Charlotte bought furniture from Ikea, Kmart, and scoured garage sales in the area for awesome deals on furniture that she refurbished.

She also got her boys in on some of the work.

Little builders in the making.

The construction took some time to finish.

Charlotte and her kids initially lived in a construction zone while major essentials were being added, like running water and flushing toilet.

She built something extraordinary from scratch while also creating a stable future for her children.

The outside of the home may not look like much, but what's inside is what truly matters.

The tiny home consists of three rooms: A main living area that includes the kitchen, Charlotte's bedroom, a bathroom and a separate bedroom for the boys.

Charlotte explained that she felt she owed to her "amazing" boys their own space who were always at the ready to lend a hand with the build.

Her "bedroom" is a shared space with the living room, kitchen, and dining area.

Even with this much of a downsize, she says she wouldn't have it any other way.

This is the view from her bed where you can see the kitchen, bathroom, living room, and dining area.

This is Charlotte's kitchen. It's interesting how open the space feels because she used open shelving instead of cabinets.

When living in a tiny home, every inch of space should be used for storage or function.

And yes, even though they live in a tiny home, her boys still make big messes.

A major advantage is that she doesn't have as much stuff to clean up since they live a minimalist lifestyle.

Charlotte has done something so empowering as building her own home that she's working on being an inspiration for other single mothers in similar situations.

She admits that she failed her workshop classes in school, but with the support received from her family she learned and persevered.

She built this ice cream stand for her boys on her own.

This mama has major skills.

And get this, she just finished working on another tiny house that's for sale.

I guess there's a new saying going around, once you live in a tiny home you'll never go back.

We are highly impressed by her tiny living lifestyle with two kids.

Tiny homes are fascinating! It gets even more interesting when you have to live in small spaces with kids– but Charlotte has done an amazing job, and this goes to show that other families can do it too. I have to admit, I do have a slight obsession with tiny homes. It must be the less stuff to clean up factor.

This mom is one of many people that are following the tiny living movement.

The response to tiny homes has been incredible over the years, and not just because of their looks. I mean, they are cute but they are so much more than that.

Millennials have set the market for tiny homes mostly because of the financial benefits.

Millennials are dealing with substantial student loan debt that has made the purchase of traditional houses out of reach.

Besides being much less expensive, tiny homes are also a lot less maintenance.

This has attracted baby boomers to the tiny living market as well.

Traditional homeowners are not far behind as they are also contributing to the trend.

They're building tiny home structures on their property's as guest houses or even putting them on land they use for vacation.

And when you have a smaller home with less maintenance, you have a lot more time to do fun stuff.

The financial freedom is attractive, but as a stay at home mom I also love the idea of not having a lot of stuff to worry about.

Some tiny homes can be built on wheels and moved wherever you want to go.

RVs do this too, but a tiny house on wheels feels like a real home. Plus, they're cool.

The use of storage is incredibly creative.

Though you have to live a minimalist lifestyle as well.

Living in a smaller space means that you can live more energy efficient.

Being energy efficient saves you money and it's good for the environment. Everyone wins.

Tiny homes do have less food storage which can be a pro or a con depending on how you look at it.

A pro would be that you have less space to store junk food– which is not good for you. But then again, there's also less storage for planned meals. Buying fresh seems to be the way to go for this lifestyle.

I'm just about ready to get into the tiny home market.

I'm still fantasizing about the part where there is less mess to clean up.

A tiny house doesn't have to be your full time home. It can be a vacation spot, office, or guest space.

If a friend of mine has a tiny house for overnight guests, guess where I'll be staying.

I think the older we get the more we want to live a minimalist life.

I may love all of my shoes, but I don't really need 60 pairs. I'm OK with letting go of stuff for a tiny-home living.

There is a ton of information about tiny homes and minimalist living on the internet and many TV shows too.

You could be a few clicks from living the American dream but in a tiny way.