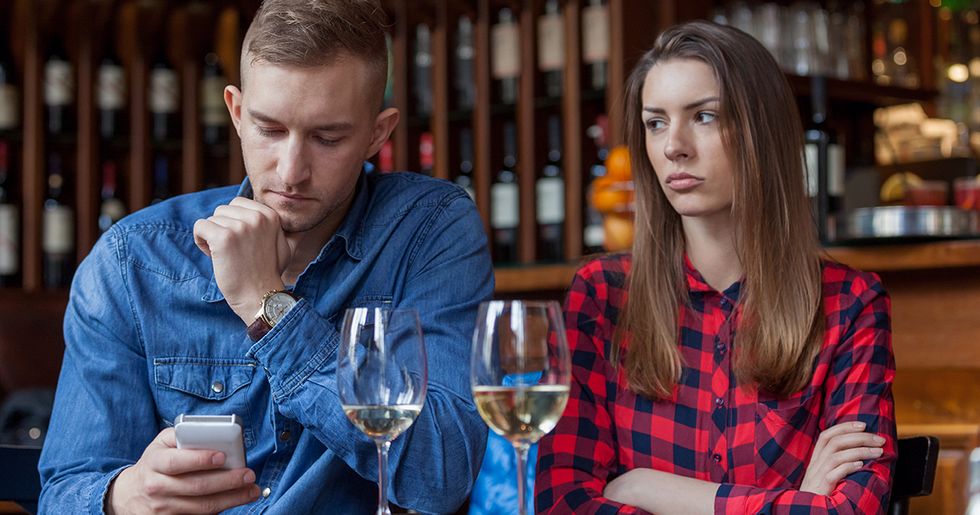 Dating is exhausting. You spend an entire evening trying to decide on the right shirt, putting on makeup, and Googling "interesting stuff to talk about," all in the hopes that you might have chemistry with another person. And it's one thing when a date goes incredibly well or disastrously wrong — it's a whole new level of disappointment when it's just kind of... nothing. You're okay, they're okay, but you're not okay together. And now you both just wasted an evening.

That's why, when you do get into a relationship, a lot of people hold on for dear life. If it goes awry, you've got to go back into the hellscape that is the dating scene. But relationships can be just as awful, especially once they get far enough along that complacency keeps you looking past the bad stuff.

That's why it's so important to know the red flags — the little things partners do that reveal themselves to be unworthy of your time and affection. And here's the internet to help you do just that — an AskReddit thread popped up recently asking users what were their biggest dating red flags, especially early in the relationship. The responses were enlightening, sure, but also harrowing if they reflect any of your current partner's behavior.

Why is this always on me?

When I feel like I have to initiate every single contact between us and if I don’t we simply won’t talk that day. - Vandelay222

Don't set yourself up for heartbreak.

A friend told me his new girlfriend cheated on every boyfriend she ever had. “Yeah, but she cares about me bro" Spoiler, she did not. - NaziHuntingInc

I dated a guy who was a yeller. Actually, he was a downright screamer. The kicker was, he’d be screaming at me and I’d ask him calmly to stop screaming at me, and he’d scream that he wasn’t screaming at me. Okay bud... He was also a huge alcoholic and I think that had something to do with it. I dreaded bringing up any issue no matter how big or small, because it would send him into this blind rage of screaming. No matter what, he’d label every discussion of ours a fight. I couldn’t have a conversation with him where he didn’t feel attacked. He came from a family of drunk screamers so I’m really glad I dodged that bullet. - OMEGA__AS_FK

It's the worst when they're just peering over your shoulder while you text, tryin' not to be seen...

Got jealous about every single call you received, even when it was from your family members. Accusing you of "cheating with that whore you're on the phone with" (even though that "whore" was your dad.) They ended up being a major cheater in the end. - Anticlimactic__

That feels... not healthy.

I like girls who are physically affectionate, but my ex was so clingy she had her gay friends visit the bar I worked at to make sure I wasn’t flirting with girls. - 44G6

People reveal themselves when interacting with those lower than themselves on the totem pole.

The one that raises straight away for me is if they talk bad or down on others, even people they don't know and it's merely off how they look or dress. - AJBeans

My ex told me he loved me two days after we were dating, wanted to meet my family after 3 days, called my cat "our son", and constantly planned our future and our wedding and what our kids would look like. I'm smart enough to know when to nip this in the bud. - allypugner

Refers to herself as a bitch or a crazy bitch. - IAmNotMyName And the follow-up quote that made me immediately picture this type of person crystal clear: "Lol I'm just such a psycho Haha!" - CrazyBrieLady

How about a little self-awareness, my man.

Honestly not sure what else there is to do in a relationship besides play head games?

Playing head games. We're not in high school, and you aren't on the Bachelorette. Be honest, sincere, and forthcoming, and we'll get along just fine. I'm in my mid-thirties, and thus am too old and rickety to jump through hoops. - Madrojian

Remember to turn on Do Not Disturb.

Blowing up my phone at two in the morning is a big one for me. I don't mind so much if it's one or two messages late at night so long as they know most people are asleep around then. But if I wake up to like a dozen texts where they're growing increasingly mad that I'm not responding, it's a red flag. - AnUnimportantLife

The best solutions upset everyone equally.

If they aren't willing to compromise on things, or they think their time is more precious than yours. My ex lived about 30 min away from me. I always met at his place or his town for stuff be never the other way around because he was, "too tired". It got under my skin because he literally was a 5 min drive from his job and I already averaged about 90 miles a day for work alone. So I'd drive for work, go home and then drive to his place. One day he tried rushing me out of our morning yoga class that ran over time, like got really uptight about it, so he wouldn't be late for work (still 5 min way). Meanwhile I was gonna have at least a 25 min commute to get to my job and wasn't that worried about it. I broke things off for other reasons but that one really buttered my rolls because I dealt with it everyday. - moshmore

I dated a guy for two months that flat out told my dad he wanted to get me pregnant so he could lock me in. I then found out he had a separate life when his other girlfriend found my phone number on my business page. - danifrankenstein

The ability to dodge questions is a dark art.

When they dodge answering questions or cut you off when you're talking. I give them a pass the first time because it might be nerves but if it keeps happening it's not okay. - TheBalance69

Someone who compliments you WAY too much. This might sound weird because of course everyone likes being complimented, but when I’m talking to you about something serious I don’t want to hear "sorry I couldn’t concentrate you’re so beautiful" or "wow I haven’t heard a word you said cause all I want to do is kiss you" ALL. THE. DAMN. TIME. This sort of clues me in that yeah I’m pretty, but you’ve put me on such a high pedestal that you can’t see me as anything less than a goddess. I want to be in a relationship, not worshiped because you have a weird fetish. - sashwam

Sometimes you just want to grab a person, shake them, and go "you were the jerk, dude!"

A lack of self-awareness. I once dated a guy who told two anecdotes of funny clusterf--ck situations. Both featured clear moments where the fault was his; his lack of research, his failure to follow through. But both stories were told like everyone else caused the issues. Like, where you’d expect “haha so yeah I should’ve done x..." he would just say “So Milo was an idiot and jumped". A week later and it was clear: he didn’t see he was the common denominator in his issues. He was quick to blame others. Any suggestion of self-improvement was met by a blank stare. A touch of humility and a lot of self-awareness is so necessary. - Ladyughsalot1

Continually posting bits of our relationship on social media. I’m dating the person, not their fan club. - TacticalMacaroon

Acting super uncomfortable or grossed out when I mention my period. - outskirtsofalderaan

When they don't have any desire to develop their own life/career/passions. I want someone that I know that has a drive to go in life on their own and find her own happiness. - WhatThePhoque

It was your idea!

Them: "Do you need some space? I understand." You: "Yeah I just need to get my head straight a second." Them: "Woww so you don't wanna talk to me?" - lordofpurple

It stresses me out.

Please respect my desire to not be called such a weird thing.

First date and the woman kept calling me "daddy". She didn't stop when I asked her too either. - the7thcircle

How are those control issues working out for you?

Started off with: "You look better without makeup" Then: "Why are you wearing those shorts?" "What is that sh--t on your face?" (when I did wear makeup) "Can't you respect me by not wearing heels?" - noqueso

Making a fuss about payment. On a first date, I prefer to pay for myself. I'm just more comfortable with that. If my date gets angry/offended about that, it's a good indication that we won't be compatible. - sleepyhollow_101

They save nuts for the winter.

If she develops a pet name for you, like "squirrel," and then proceeds to talk to you the entire time in a high pitched "girl squirrel" voice. Then she talks so much that you can put your phone down next to you and then pick it up 20 minutes later and she is still talking. - Gia75whiteload

I was dating someone for a few weeks and they wanted to meet up on a day I had school. I told them I was unable to meet with them. Their reply? "If you loved me you would do this for me." I said, "Good thing I don't love you. We're broken up." - MelodyAnneHaggerty

He might've just forgotten your name.

It sounds kinda weird, but I didn’t like it when the pet names would start early. Like, I wasn’t even DATING this guy — just talking — and he was already calling me “sweetheart" and “honey." - Reggie_yeetye

When it's between a guy and the cat, the cat always wins.

My ex once got jealous of a cat. I got a little kitten while we were dating and he was over at my place two days later. I was pretty excited to have a kitty, and if you've ever had a small cat, you know they demand a lot of attention. So obviously, I played with the kitten while he was over and he got jealous. Of. A. Fricking. Cat. Thanks god we're through, and my cat is still by my side :) - heyimfreezing

If they’re super passive. The “yes" men who will just agree to anything you say without adding much to it or talking about what they want. “We should see a movie" “Okay." “What movie do you want to see?" “I’ll watch anything you want to watch." “How about that sonic movie? The redesign is out." “Okay." I dunno it just ticks me off that they’re gonna be like this about important stuff too or that they’re going to silently let you do whatever you want until they explode because they’ve never been able to do anything you want. - ModestScorpion

No better judge of character than a dog.

My dog hated him. She’d bark at him and if he moved to pet or touch her, she’d be afraid and jump away. She judged him correctly; me, not so much. - understandinghooman Now that you know the red flags, stay tuned for the worst dating pickup lines EVER...