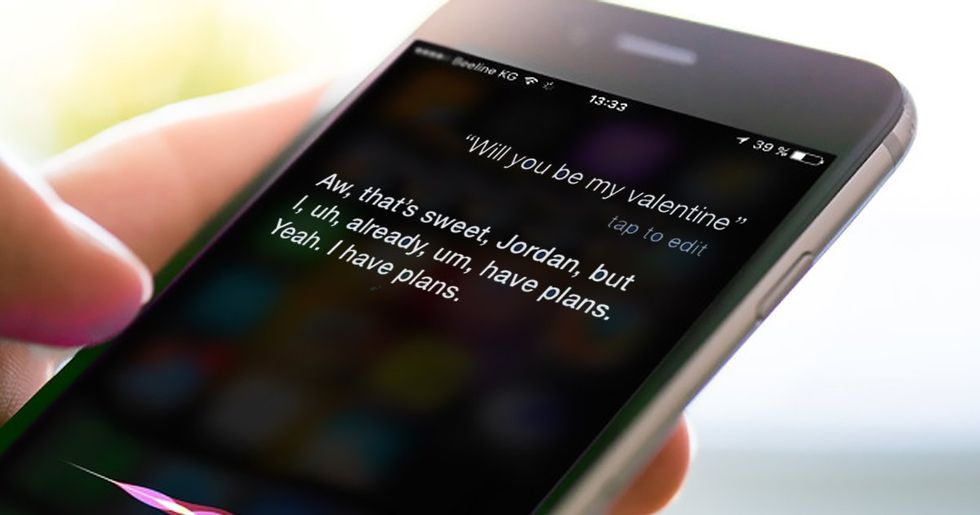 If you have an iPhone, you are probably aware that robot helper Siri can sometimes be a little too clever for her own good. Of course, if you need a recipe for pesto pasta, she might give you the definition of the word "imposter." If you would like to find out more about the element aluminum, she might direct you to a store where you can buy tin foil. She messes up a lot, and it can be really frustrating to get Siri to actually do her job.

But if you ask her about herself or come at her with a snarky question, Siri will always have an answer. She is quick with the comebacks, folks! What Siri says may not be what you want to or expected to hear. She can be so sassy that it might actually shock you. So, if you have nothing to do, ask Siri to join you in reading these hilarious responses she has had to some funny questions.

Because after you see these snapshots of Siri's best answers, all you will want to do is stay home and ask her questions all night. I guarantee it.

Wow. Not even the artificially intelligent robot in their phone wanted to be Jordan's valentine. That's harsh.

Wow, sounds like Siri's been scorned before. What a dramatic relationship history she must have!

The meaning of life

I mean yeah, this checks out. I don't know what else to say. I knew this already.

Siri manages to answer the question, write an original poem, and insult the asker all in one perfect answer. But this isn't as good as the next few...

Well, this is a sick burn and also now I want cookies? How does that work? Siri is an evil genius.

This is Siri's version of Lucille Bluth's, "I don't understand the question and I won't respond to it," and I am here for it.

Ooh, this is how Siri gets you. She pretends not to understand what you're saying and then swoops in at the last second to make you feel like an idiot.

I asked Siri this question on my phone and she gave me the same answer, so it might be clever, but it's not that clever.

Siri's got the jokes, y'all! She can really tell 'em. And who knew that this joke worked just as well with American dollars and English pounds? The next one is perfect.

What are the chances?! You would think that Siri could handle a simple coin toss without messing it up.

Um, what is this supposed to mean? How many naked pictures of themselves did this person put in the cloud?!

I bet this person thought they were going to outsmart Siri with this question, but the joke's on them! Siri's a huge Lord of the Rings fan.

Again, this is further proof that I don't think I would trust Siri with a coin flip. She clearly has an agenda.

Reminder: Be on Mars

It's hilarious that both Siri and this person think that the human race will be around that far in the future. From where I'm sitting, we have like, 12 years left.

Listen. Some people say puns are the lowest form of comedy. Those people are wrong and hate everything that is good about life. This is a perfect joke.

Uh oh. Maybe before you show your boyfriend what Siri can do, make sure you only have one boyfriend. Yeesh.

Siri has told you this a million times. You think she wants to go over this again? Learn how to do crimes better!

Who let the dogs out?

This is very funny Siri, but I need to know whether you're a dog person or a cat person. Siri gets cold in the next one...

Wow, way to be a judgy piece of crap, Siri! Sometimes you wake up late and that is OK.

Well, this clears it up. glad Siri consulted that extremely reputable source for her answer.

Of course Siri is a Game of Thrones fan. I just asked her who her favorite character is and she replied, "Is George R.R. Martin listening? I've heard it's risky to share such things out loud."

Hilarious, Siri, thanks so much for your hilarity. I guess that's what you get for asking a virtual assistant to find you a husband.

At least she knows it and she owns it. The next few are truly shocking...

Who knew that Siri had such a rich personal life outside of answering your questions? You go girl!

Siri! No! I don't think this is what this person meant! They just wanted some advice! Although, maybe being straightforward about it isn't such a bad idea.

Leave it to my girl Siri to come up with a costume that is at once clever and super annoying for everyone.

Siri gets hungry for chocolate muffins. We all do. What's wrong with that?

I couldn't resist asking Siri my very own question. I have to say, she nailed it. Share this with someone who likes to talk to Siri!