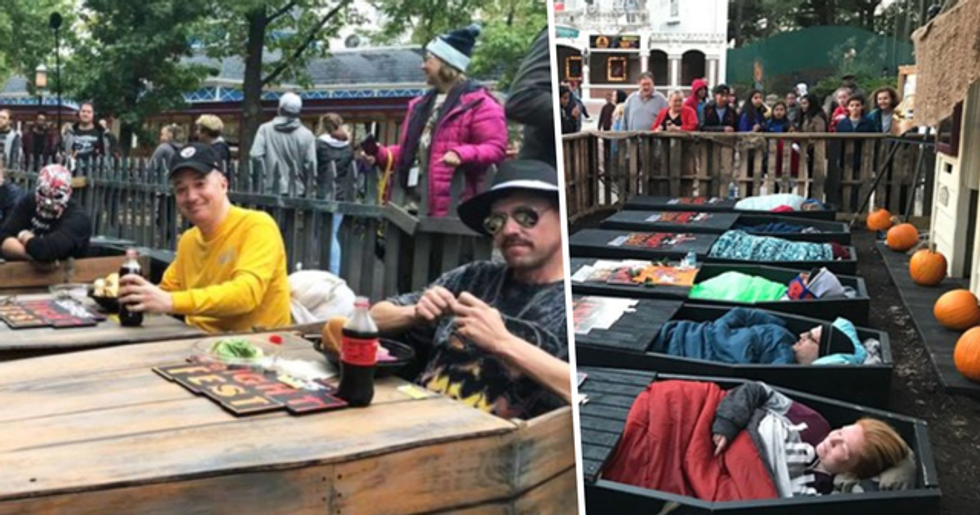 For many people, the thought of being trapped in a coffin is a literal nightmare.

The claustrophobia and the inability to move is simply terrifying, and it's something that the majority of us will never wish to experience alive.

But what if you are offered $600 to stay in a coffin for thirty hours straight?

This has certainly changed the opinions of many, after Six Flags has offered this cash prize in exchange for this lengthy amount of time spent in a coffin.

Here in the United States, the competition of theme parks is intense...

We are the home to some pretty incredible amusement parks, and that doesn't just include Disney.

Of course, Disney does hold the title for one of America's greatest amusement parks.

Disney is said to be one of the most magical places on Earth.

There's some hefty competition, however...

Especially for thrill-seekers all around the world, the United States is the best location to find an unbeatable theme park.

Six Flags is one of the biggest competitors...

Founded in 1961, Six Flags was founded in Texas in which its first amusement park was built.

It now boasts twenty-five locations across the U.S, Mexico, and Canada...

Six Flags is now the largest amusement park company in the world based on the number of properties it owns and it is ranked seventh in terms of attendance.

Millions of visitors flood through the gates every year...

So it looks like there are more people out there than you would imagine who just love to be scared.

Halloween is coming up...

And it's no secret that theme parks have an absolute field day on Halloween.

Fright Fest is one of our country's biggest Halloween events...

Held in all Six Flags theme parks in America, Fright Fest spans from the 14th of September through till the 3rd of November. "It's a spooky time of the year as zombies and ghouls take over the park," Six Flags wrote on their website.

This includes riding the rollercoasters late into the night, late-evening activities for families, and escape rooms that are known to be terrifying.

But it seems Six Flags are a little bored of the usual haunted house...

There's nothing more frightening than being trapped in a coffin, so why not bring a few to the next Fright Fest?

This is exactly what Six Flags have done this year.

The St. Louis park is hosting a "30-hour coffin challenge" this year for Fright Fest and it sounds utterly chilling.

Eighteen couples have been challenged...

This claustrophobic test of endurance will go on for a staggering thirty hours in a sixty-five by seventy-two-inch coffin... in which the couples - who must be over the age of eighteen - will lie in together.

All couples will compete for a prize...

These couples can be friends, lovers, or family members, and those who make it through the challenge will win a cash prize of $600 and a pair of golden season passes for the 2020 season. It seems worth it, right?

Thirty hours laid next to someone is a long time...

There are official rules that mustn't be broken in order to win...

These include activities such as checking social media, eating, and sending emails -  that's only allowed on designated break times. Participants will be allowed to sit up in the coffin every few hours, but they will not be allowed to leave their wooden beds at any time other than toilet breaks and for challenges - only their faces will be exposed from the fully-shut lid.

Participants go in at their own risk...

Insider reported that Six Flags warned that participants "will potentially be exposed to fog, dramatic lighting, flash photography and extreme weather conditions" and that the rules may be altered for their safety.

Last year's challenge only involved single participants and, believe it or not, all 6 participants withstood the thirty hours of laying in a coffin and enduring the creepy challenges.

Leticia Gomez was one of the 6 contestants...

In an interview, she said: "I was not cold... I kept getting spiders. I killed five spiders — they were real spiders, tiny spiders." Fright Fest actors would be in and out of the compound trying to scare the participants laid in their coffins, which Gomez said was not pleasant.

Park spokesperson Kristin Fitzgerlad said: "It goes from serene to insane in a split second." "Throughout the challenge, we had various zombies, crazy clowns, the traditional walking dead, demons. It was all part of the challenge that they would not only have to survive being in a coffin for 30 hours but also unannounced visits from our Fright Fest Freaks." Fancy spending thirty hours in a coffin with no personal space at all for $600? Then sign up here... Curious about another incredible (and much less well known) park? Keep scrolling!