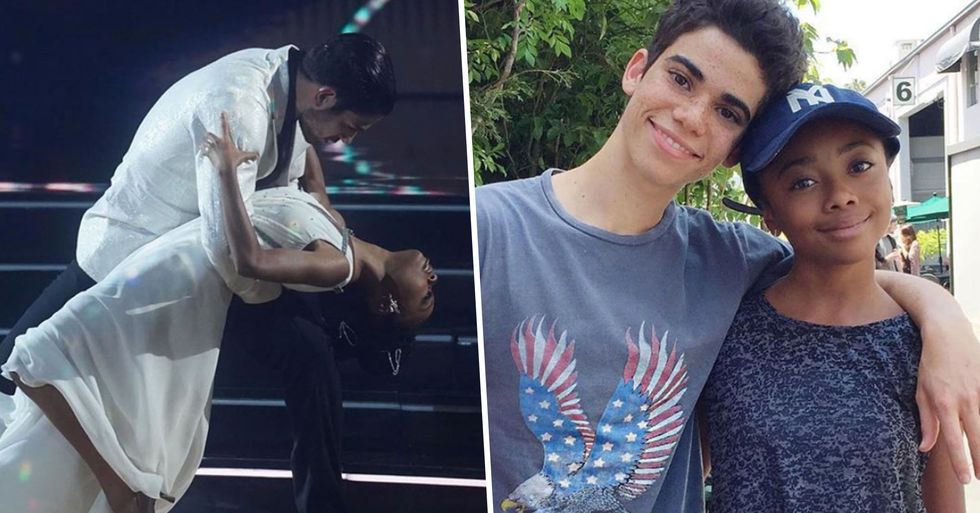 Over a year on from Disney star, Cameron Boyce's, tragic death, his friend and former co-star Skai Jackson has dedicated her Dancing With The Stars performance to the late actor.

The internet has had a lot to say about it...

In the ballroom, Jackson paid a touching tribute to the star.

Jackson truly danced from the heart on the latest episode of Dancing With The Stars, and it's left the internet feeling very emotional.

The actress had tears streaming down her face during the performance...

And it's reminded fans just how much of a tragic and untimely loss Boyce's death was.

For those who don't know, Boyce was best recognized for his work with Disney.

And news of his untimely death hit the world hard. The actor passed away on July 6th, after suffering an epileptic seizure in his sleep.

Tributes flooded in for the actor.

People were shell-shocked when the news broke.

Social media users instantly expressed their shock and sadness over Cameron’s unexpected death, with many fans feeling a close attachment to the actor.

And one person who was personally affected by his death was Skai Jackson.

Eighteen-year-old Jackson worked alongside Boyce from 2011 to 2015 on Disney’s Jessie - and in that time, they forged a close friendship.

And this week, she decided to pay tribute to the late star.

Jackson took to the ballroom once again in the latest episode of Dancing With The Stars, dedicating her dance to Boyce.

Speaking to her partner, Alan Bersten, before her performance, she said that Boyce was “in my life for half of my life."

This performance clearly meant a lot to Jackson.

"Of course, I miss him every day… It just makes me a little bit sad, of course. He’s not here, but I know that he would be really proud of me. … I’m just really glad that he’s here to watch over us."

The actress had tears streaming down her face after she danced to John Legend's Ordinary People in memory of her friend.

And it seems her performance touched the hearts of judges too, scoring Jackson her first ten of the season.

The internet also had a lot to say about Jackson's tribute.

And reactions instantly came flooding in.

Do NOT mind me I am Just sobbing over Skai Jackson’s dance dedicated to Cameron Boyce. God I miss him. He could’ve taken over the world.
— niamh (@niamh)1601948790.0

@DancingABC @skaijackson So simple and graceful, damn I was tearing up from her story cause Camerons death was hard on me too
— Lexi (@Lexi)1601948373.0

@DancingABC @skaijackson I cried during this performance! That was absolutely beautiful.
— Marissa (@Marissa)1601948431.0

@DancingABC @skaijackson The best tribute to Cameron. I know he is so proud of you.
— Allison Scanlan (@Allison Scanlan)1601950928.0

@mackanolans @DancingABC @skaijackson 😭 It was a very emotional story about Skai and Cameron’s friendship as well a… https://t.co/tW4NOBXIhS
— Melissa (@Melissa)1601981647.0

You can watch the full performance below.

Such an incredible tribute. Cameron would be proud. For more on Boyce, scroll on to watch the emotional video his mom posted on his twenty-first birthday...