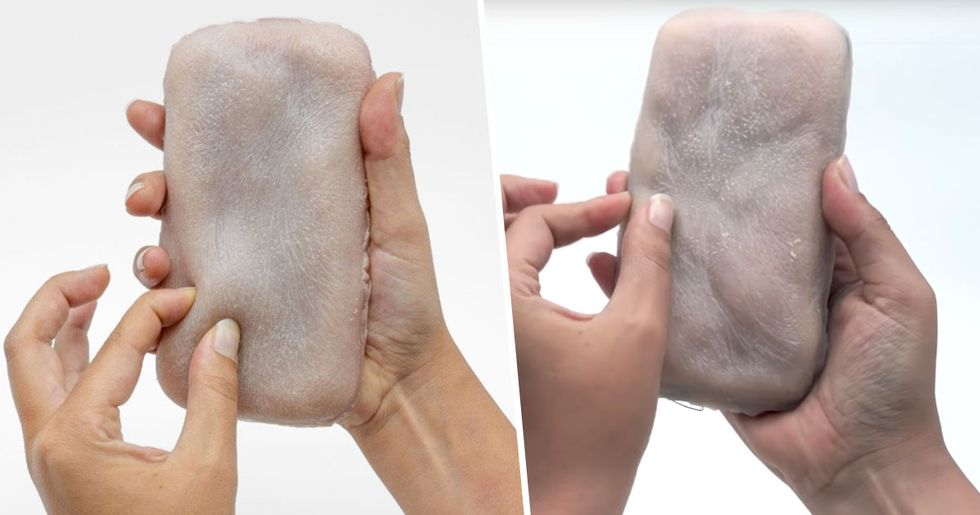 You heard it right...

The latest product to catch everyone's attention is a phone case that attempts to replicate the look and feel of human skin.

Now, you might be thinking why on earth would you want your phone case to look and feel like skin...

Well, you're not the only one.

Since the product was announced it has caused nothing but controversy.

The skin phone case creator (never something I thought I'd be saying,) Marc Teyssier has been getting a lot of abuse on Twitter since he launched his new product.

I guess some people feel this new technology represents a future we really don't want.

Let's see what all the fuss is about...

“I wanted to pinch my phone"

When asked by New Scientist why he decided to design such an unusual phone case, creator Marc Teyssier said: "I wanted to pinch my phone."

The flesh-like phone cover is hypersensitive.

The technology works on a process of "flesh on flesh," with the cover responding to the human touch.

The idea of tickling your phone is just strange.

If Teyssier wanted to convince people that his skin-like cover wasn't weird, boasting about it's tickling capabilities in the promo vid probably didn't help.

Marc Teyssier is a PhD student in Human-Computer Interaction at Telecom Paris. Telecom Paris one of the leading higher education institutions for research and engineering. Considering the nature of Marc's field of study the fact that he created the product he did should come as no surprise. I mean "human," "computer," "interaction,"... sounds like a skin phone case to me.

It just looks wrong, doesn't it?

The idea of electronics and human conjoining in this way is far too much into the uncanny valley for me.

Some people are into it...

Of course one must remember even if we don't fancy getting a flesh-like phone case, there may well be people out there that do want it.

It's the future of this product that's worrying...

According to multiple sources, Teyssier and his team aim to make the skin even more life-like... This ambition to achieve a perfect likeness to human skin has left people questioning what motivation is encouraging this product to be designed.

At the time, Teyssier explained that his intention in designing this product was to "enable smartphones to crawl across a table." I mean, personally I don't see the need for my smartphone to crawl across flat surfaces, but what do I know?

You can see why people have considered that this product might be popular amongst a fetishistic corner of society.

It has certainly attracted a niche market.

It seems this product has opened a worm-hole of unusual desires...

The idea that we want to replicate human touch with our phone cases is pretty worrying. I mean, didn't we learn anything from Spike Jonze's 2013 science-fiction romance, Her?

Smartphones do not need to be more personable.

What is it with humans trying to make everything around us more human-like? First, we were dressing up dogs, then we were putting little wooly hats on innocent smoothie bottles, and now we're trying to give our phones skin. It's madness, I'm telling you!

Is this really the future we're moving towards?

Will people be going on their phones to go on dating apps, to match with other phones, because they've broken up with their phone and want to make it jealous by dating another? I feel sick.

A period when I had no rights, no agency and spent my twenty years on the planet walking in heavy skirts through barren moors and windy cornfields. I mean sure I'd probably die of tuberculosis before I'd had a chance to write my world-changing novel, and I'd probably have married my cousin and would be perpetually starving.... but, now here's the important thing: At least I wouldn't be a part of a world where people are getting skin-like phone covers.

Comedian Chris O'Dowd agrees with me.

Sometimes you just have to make your opinion heard, loud and clear.

Technology is wasted on us.

I mean, we now have handheld computers that are smarter than the human brain, and what do we use them for? TikTok.  Whatever that is.

and I'm not talking about the flesh-like product itself, but moreover where this "invention" could lead.

You and me both.

Marc didn't realize he would receive such backlash.

After announcing the launch of his skin phone case it seems Teyssier has been the subject of online threats.

It seems that Marc and his buddies don't get people's issues with it.

I'll admit threatening to shoot the inventor is a silly comment to make, however, I do think some of the comparisons are accurate.

Why skin on mobile devices? It question the relation we have with our devices, and is also good opportunity to impr… https://t.co/7tBVV9Ncsb
— Marc Teyssier (@Marc Teyssier)1571393729.0

The product is being presented officially this week at the ACM Symposium on User Interface Software and Technology in New Orleans. After that, who knows where this product will end up... Locked away in Marc's apartment, I hope. Do you feel as though you might have an unhealthily close relationship with your smartphone? Do you take it everywhere with you? Even into the bathtub? Well, continue scrolling to read why you should never do that.