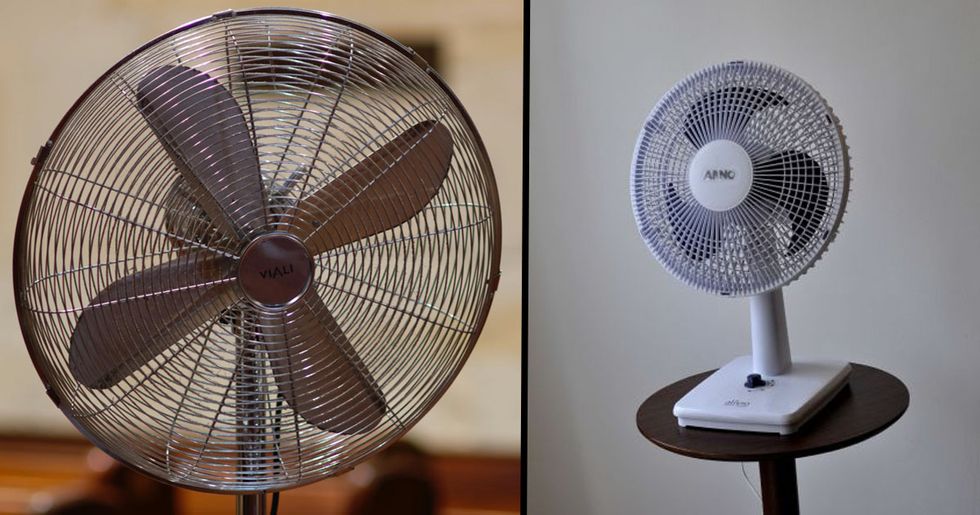 With the Easter period almost over, we can now, finally, say hello to the oncoming summer…

And all the difficulties that come with it. Although long, sunny days are always a welcome treat, the hot weather also comes with its fair share of negatives. From sweaty armpits to boiling hot tarmac, sometimes, summer weather isn’t the easiest thing to enjoy.

Another feature of the summer season is the long and hot summer nights, nights wherein we can barely sleep due to the heat of our rooms. It's during these nights, that we may feel tempted to grab our ancient fans from the attic, brush off the cobwebs and enjoy a peaceful sleep encircled by cool, welcoming air.

But a recent study may have revealed that sleeping with a fan on could be hazardous to our health. Keep reading to find out more.

Summer is on the way.

Which means sunny days, trips to the beach and ice-cream!

And who doesn’t love summer?

It’s a proven fact that the summer weather makes everyone feel better.

But there are some hitches.

Although feeling the sun on your face is amazing, the summer does cause some issues.

For one thing, you can get sweaty.

And there’s nothing worse than having your day ruined by an outbreak of perspiration.

And then there’s how hot everything gets.

Hot weather means hot everything. Sometimes, you can’t walk down a street without scalding your hand on a street light.

And then there’s the nights.

Which are basically a mixture of everything we’ve just discussed: hot, sweaty and almost unbareable.

Instead of peacefully drifting off to sleep, you stir in bed, wondering why your mattress is so clammy.

You wake up in a pool of sweat.

If you are lucky enough to sleep for only a few hours, you’ll often wake up in the middle of the night drenched in sweat.

And it can actually get pretty hard to breathe.

You may decide to throw off your quilt for the night, only to realize that you are still being embraced by the close and warm air.

So there’s only one option left open to you.

To grab a fan!

And then everything is okay...

You settle down and peacefully fall into your dreamscape, blanketed by a delightful chilly breeze.

Because, recently, it was announced that sleeping with a fan on isn’t actually that good for you.

And you won’t believe why!

Fans help to move air around the room. And that's great.

But maybe it's a little more sinister than it seems.

Because of the air circulation, fans also cause dust, pollen and other substances to flurry around you.

Meaning that a lot of it can be inhaled.

Basically, a lot of this stuff gets sent up your nose.

Which is a nightmare if you have allergies.

Because if you suffer from asthma, hayfever or general dust allergies, the moving around of pollen and dust probably isn't going to do you a whole lot of good.

Most people usually have their fans in the attic or junk room, which means that when you drag them out and turn them on they are already caked in a layer of dust. Gross.

Harmful bacteria will be sent your way.

Doesn’t sound that great does it?

But fans can cause even more damage than that.

Fans can also be a danger to your skin.

You wouldn’t think it, but fans have also been known to cause dry skin.

Why even bother, right?

Excessive use of a fan can also cause your skin to dry out, meaning that you’ll need to start investing in chapstick before the summer season is over.

But it could be worse if you sleep with your eyes partially open.

Those of us who sleep with certain orifices open and exposed should also be careful. And those who sleep with their eyes partially open are at risk of completely drying out their eyeballs.

And don’t even get us started on sleeping with your mouth open!

We’ll leave those nightmares for another day…

A constant air stream can also dry out your sinuses.

If this particular occurrence is very extreme, it can actually lead to your body producing an excess amount of mucus. Doesn’t that sound lovely!

Which means that you are open to a whole host of other problems.

Such as headaches, blockages and stuffiness.

Fans can also play hell with your muscles.

Yes, if you wake up with muscle pain after a long night of fan-coated sleep, well... you can guess the culprit.

Turns out, air can do a lot of horrible things.

Concentrated amounts of air on the body can make your muscles seize and cramp - something that no one wants to experience when they’re trying to nap.

But there are also positives.

Fans, of course, do help to cool you down which makes it easier to sleep.

But they can also help with other things.

Like air circulation in your bedroom and acting as a form of white noise.