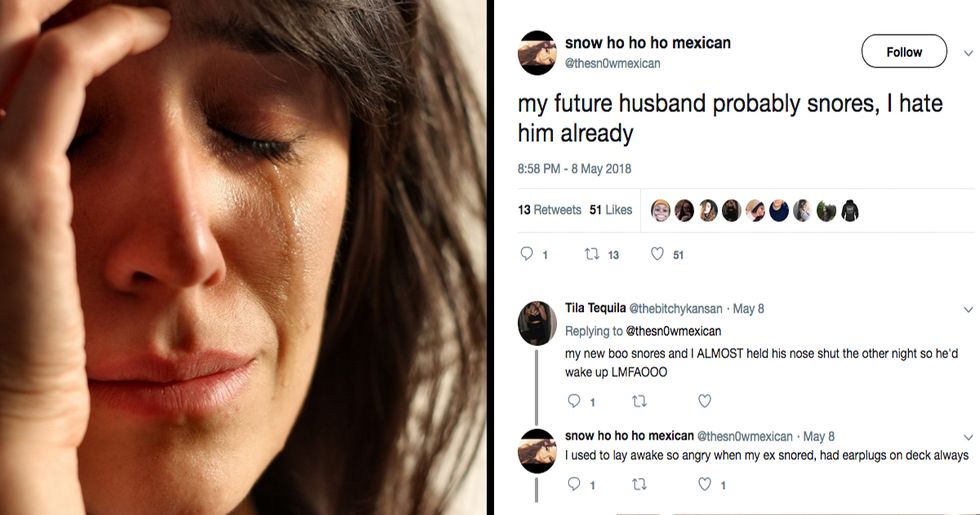 Sleeping next to someone is a perfectly lovely experience. You can snuggle with them! You can warm your feet up on them (if they let you)! And, if you have a bad dream, there's someone there to comfort you!

I don't know if this will necessarily make you feel any better, but you're not alone. There are others out there who feel your pain. Here are there tweets.

They might wake up and stop briefly after step six, but you better believe you're going to be right back at step one once they fall back to sleep.

And the other person secretly records the snoring, obviously. That's when you know it's true love.

This is very wise.

This reads to me like some kind of proverb. The loudest snorer sleeps first. The non-snorer never sleeps.

Snoring used to really annoy me. But now I look at it as this subtle reminder that someone you love is sleeping ne… https://t.co/BfYSM2XkvZ
— Lili Reinhart (@Lili Reinhart)1533015594.0

That's a very nice way of thinking about it! But I'm glad you realize there's a limit to how gracious any one person can be when it comes to snoring.

Who says it's hard to keep the romance alive after marriage?

Now, where have I heard this one before? That's right. From someone who snores.

I don't know if I'm willing to go that far. But they are both super awful!

You've got some explaining to do, my friend! Best of luck to you.

But as we've already established, the furry snorers are much cuter than the human ones. That's the way it is!

I agree that it has to be done, but it's probably not going to be received very well. I'm warning you.

You might as well have a full conversation with them. They're not going to be waking up any time soon. Do you sleep with a snorer? Share this with them!