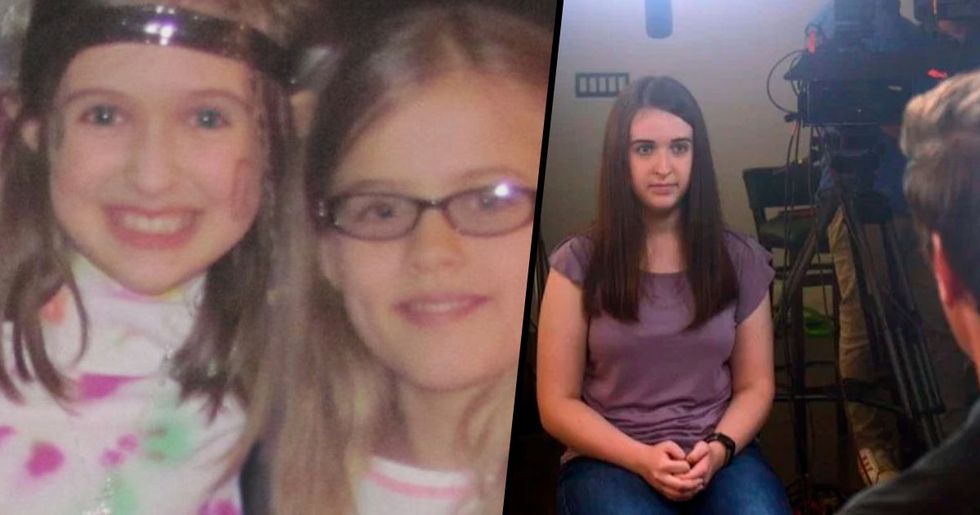 Slender Man Victim Speaks Out for the First Time

Back in 2014, twelve-year-old Payton Leutner made headlines across the world.

The sixth-grade student was stabbed nineteen times by two of her classmates.

When it was discovered why twelve-year-olds, Morgan Geyser and Anissa Weier had carried out the attack, the world took notice.

Upon their arrest, the sixth-graders admitted they did it to appease Slender Man.

For those that don't know Slender man was an online fictitious character.

This led to a public outcry and a worldwide conversation over the dangers of the internet.

People wanted to know why a creepypasta Internet meme created on an online forum led two girls to stab their classmate nineteen times.

For the first time since the horrific events of 2014, Payton Leutner has spoken out.

Have you heard of Slender Man?

Like most memes, they rise and fall out of public interest. If it was not for the horrific stabbings attached to this meme perhaps this bogeyman would have disappeared long ago.

You can even purchase Slender Man costumes on Amazon.

There's even been a Slender Man movie.

Released under much controversy, following the stabbings, Sylvain White released Slender Man in 2018. The horror movie followed a group of friends who become obsessed by the internet lore of the Slender Man and decide to prove he doesn't actually exist. That is until one of them mysteriously goes missing... Spooky, right?

The movie was a little too close to home for some.

Bill Weier, the father of Anissa Weier, one of the girls that took part in the stabbing called the trailer "extremely distasteful." In respect to those involved in the crime, Theaters in Milwaukee, Wisconsin decided not to show the film.

But where did Slender Man come from?

And what was it about this online bogeyman character that captured so many people's attention?

This was the first image of Slender Man.

Knudsen entered a competition in July 2009 on the Something Awful internet forum. It was a photoshop competition wherein contestants were challenged to make images of imagined paranormal activity.

Both featuring the ominous character, Slender Man lurking in the background. Knudsen added to his submission with extracts of text from imagined witnesses. These texts described the abductions of groups of children and referenced the character's name: "The Slender Man."

The thread that mythologized the character grew and grew, with Knudsen adding to it constantly. The 4chan board was full of people creating Slender Man related artwork and memes.

The myth grew and grew...

With people questioning why so much information about this supposed boogeyman was available online whether it was, in fact, real.

I mean, as much as a mythologized meme can be.

In 2012, a Tumblr user known as Conjured Charisma posted this image to their page. The internet went wild. A sub-genre of Slender Man was born and the memes began to roll in.

But as much as some people took Slender Man as a joke...

People did not realize what the effect of the internet boogeyman had on some young people.

The kids got roped into the myth.

It's better known as the Slender Man Trial. These drawings were found in the young girls notebooks: https://t.co/ovtqByzM20
— Serial Killers (@Serial Killers)1455910145.0

To them, the boogeyman became a reality.

They planned to kill their friend Payton.

As part of a ritualistic game to please the boogeyman, the two girls hatched a plan to sacrifice Payton by stabbing her. As you can see by their list of "supplies," this was a plan hatched by young minds.

After Payton was found in a park with multiple stab wounds, her two friends who she had been supposedly having a "birthday sleepover" with, were arrested.

It was decided that the girls would be tried as adults.

At hearing for defendant Morgan Geyser, judge in the #Slenderman stabbing case rules she and Anissa Weier will have… https://t.co/NSf1ieRe9F
— Nick Bohr (@Nick Bohr)1481565511.0

Despite only being twelve years old, both Morgan and Anissa were tried as adults. Initially, they were sentenced to a combined 65 years in a mental institution. In 2017, Weiser pleaded a reduced sentence on grounds of insanity and will now serve twenty-five years in a mental facility. In 2018, the Associated Press reported that Geyser had been sentenced to 40 years in the Wisconsin mental hospital, which is the maximum sentence allowed.

The sentencing has caused controversy.

Whilst some people have agreed with the charges put against the girls, others have sympathized with their age and the mental delusions that led to the killing. Apparently, one of the girls claimed to psychiatrists that before the killing she had "conversed with Lord Voldemort and one of the Teenage Mutant Ninja Turtles."

Payton was just a child too when she suffered the attack.

Now seventeen-years-old, Payton wants to reclaim her story and not just be known as the girl who was stabbed.

They go into detail about how the incident affected them as a family, and how they have tried to move forward over the past five years.

The interview will be available tonight.

The two-hour 20/20 interview by David Muir will be airing on ABC tonight 9|8c. Continue scrolling to read all about another meme that went totally wrong...