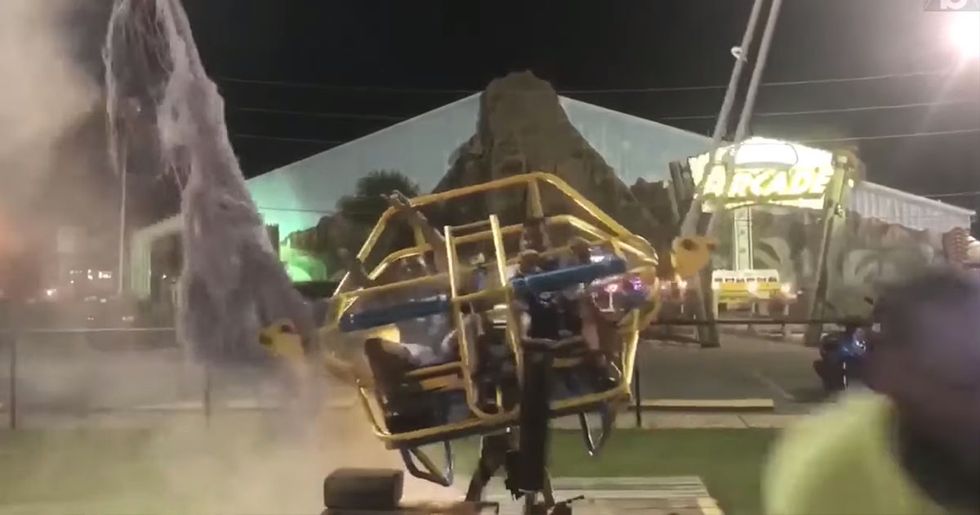 There's something strange within some of us that loves to be thrown in the air at ridiculous speeds on theme park rides - is it the sheer adrenaline rush, or the anticipation? Who knows? But it's undeniable that the adrenaline junkies among us love a good rollercoaster.

But we all know that, when it comes to rides, there are huge safety risks and we are quite literally putting our life in the hands of a ride operator, some infrastructure, and over-the-head seatbelts.

More often than not, we have the adrenaline rush of our lives and are lining straight back up to go again. But that wasn't the case for the 2 men who were about to be launched into the air on a slingshot ride in Flordia - as the ride snapped right before launch.

Keep scrolling to watch the video of the horrific, jaw-dropping incident...

Many of us love a good rollercoaster.

Amusement parks attract millions of visitors, all waiting to embark on the adrenaline rush of a lifetime.

Do any of us actually know why we like them so much?

Being catapulted into the sky upside down at high speeds doesn't exactly sound appealing when you put it into words.

Some of us even force our friends to go on them with us...

We all know the feeling of either trying to desperately convince a friend to go on your favorite ride with you because it's "not as bad as they think," or, on the flip side, being that unfortunate friend who has reluctantly agreed to embark on a nightmarish rollercoaster just to be a people-pleaser.

Either way, we all know that there are risks.

Relatively-speaking, the odds of them breaking down, causing injury or generally having disastrous consequences are pretty slim.

Despite the low probability, rollercoasters have been host to a number of devasting incidents.

From life-changing injuries, horrifying crashes, and even death, a split decision to strap into a rollercoaster has caused devastation to people's lives.

Earlier this year, a ride in an Indian amusement park snapped in half...

Twenty-four-year-old, Manali Rajwadi, and twenty-two-year-old, Mohammed Javed, lost their lives after a ride at the Kankaria Adventure Park in India, snapped in half, sending the bottom half of the ride crashing down. Twenty-six other riders were immediately rushed to hospital once they were broken free from their straps.

The consequences were heartbreaking.

What started off as a fun day out ended so terribly. An investigation has since been launched to determine the cause of the tragic crash.

Over in the U.K., a theme park crash 4 years ago also had horrendous consequences.

When "The Smiler" ride at Alton Towers theme park in the U.K. crashed after hitting an empty carriage, it severely injured 5 people and caused 2 women - Victoria Balch and Leah Washington - to have their legs amputated.

According to the BBC, staff at the park misunderstood a shutdown message and wrongly restarted the ride. No technical or mechanical issues were found with the ride itself.

The ride has since re-opened.

Because the devasting crash was caused by human error, in 2016, the ride was deemed safe to be re-opened to the public again.

Despite the huge risks, "slingshot" rides are proving very popular at the moment.

The ride sees thrill-seekers catapulted into the air in a literal slingshot.

You've probably seen many videos of people taking on the ride online.

Many of them make for laugh-inducing viewing.

And that's exactly what 2 guys found out after recently embarking on a slingshot ride in Flordia.

Cobra Adventure Park in Panama City Beach is host to the popular slingshot ride in question.

A video, captured at the park, has surfaced online, showing 2 eager parkgoers getting strapped into the ride ready to be launched hundreds of feet into the air.

But the horrifying footage shows the moment that the ride snaps.

Just as the pair were about to fly into the air, the ride's cable snapped and shredded, leaving spectators watching in horror. Want to see the footage? We've got it coming up very soon.

It was a near-death experience...

Despite nobody being seriously injured, the pair's near-brush with death is scary to witness. If it had snapped just 2 seconds later, who knows what would story we'd be writing right now?

The woman who captured the clip said that she decided at the last minute not to embark on the ride.

Despite having been on the slingshot before, Krissy Hurst, who posted the footage online, said she had a bad feeling about the ride so she opted out last minute. She said she took the video because the ride's usual recording system wasn't working.

She said that the men have received a refund for their ordeal.

But, despite getting a refund for the adventure park, she says that it didn't seem "like anybody was really apologetic."

Check out the video below:

It makes for shocking viewing.

Many people have been putting off going on the ride since the footage surfaced. It really was a close call. We certainly won't be going on a slingshot anytime soon... Recently, another theme park ride hit the headlines - not because it broke down, but because it was horribly offensive. Keep reading for more on that.